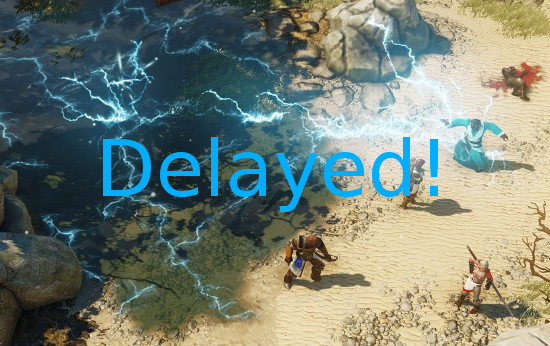 Divinity: Original Sin has pushed back the Linux version once again, so you can give up on seeing it this year.

The Kickstarter update about it:


QuoteDevelopment is continuing with things like the Linux version and the hardcore mode still on our lists, but as we want to do this thoroughly, it will still take some time before we’re ready.

The Linux version especially suffered an extra delay as a result of our porting team having to fix a number of compatibility issues that popped up with the release of Yosemite. Whereas we initially hoped to get the Linux version done this year, it looks like it’ll be the beginning of next year now.

We know that’ll disappoint a few among you but bear in mind that we’re doing a real port just like we did with the Mac version.

Previously, they said that they hoped it would be this year.

Sadly this is becoming more typical when companies either don't research enough before they make promises, or they outsource development, which Larian does, as Larian isn't producing the Linux client in-house (they are using the same porting company for the Mac version).

Stay positive, it will hopefully arrive before this time next year. I'm calling it "Larian Time".

Thanks to zero for letting us know! Article taken from GamingOnLinux.com.
Tags: Crowdfunding, Editorial
0 Likes
Share

Nightmare Twilight 15 Nov, 2014
View PC info
I remember a time when a company would delay a game, meant that they cared about releasing a quality game. If they are trying to bring back those days, I don't mind waiting.
0 Likes
FutureSuture 16 Nov, 2014

RCL 16 Nov, 2014
View PC info
This is why UE4 supports and will continue to support cross-development, to reduce costs of making a Linux version in-house. Not a port, but version - i.e. the same code and content.
0 Likes
FutureSuture 16 Nov, 2014

Quoting: RCLThis is why UE4 supports and will continue to support cross-development, to reduce costs of making a Linux version in-house. Not a port, but version - i.e. the same code and content.

Don't Unity and CryEngine do that as well? I am sure Source and some others do it too.
0 Likes

Don't give in to temptation. Just play other games for Linux in the mean time. You are also in this group, I see.
1 Likes, Who?

Don't bet on it. How many times have we waited months or years for a Windows only game to get a Linux port only to find once it's released it's a bug filled bag of crap?
1 Likes, Who?
FutureSuture 16 Nov, 2014


Don't bet on it. How many times have we waited months or years for a Windows only game to get a Linux port only to find once it's released it's a bug filled bag of crap?

Larian is not exactly an unknown studio, nor does it carry a negative reputation. I will give it the benefit of the doubt.
0 Likes
1/2»
While you're here, please consider supporting GamingOnLinux on: