Divinity: Original Sin Is Pushing Ahead For The Linux Release 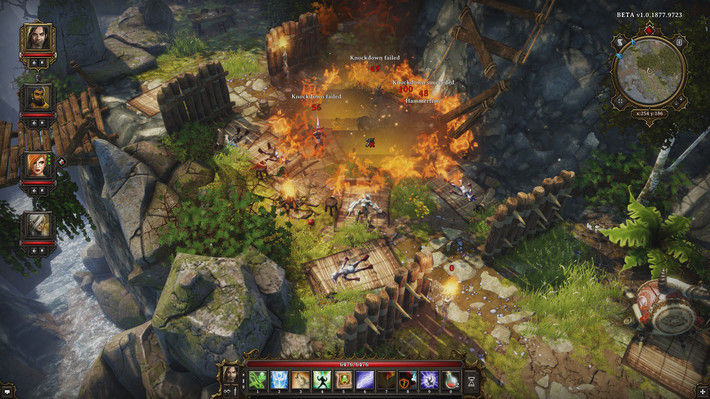 I had a chance to speak to the developers of Divinity: Original Sin who confirmed the Linux version is being worked on right now.

When asking for an update the developers kindly replied with this:

We have guys working on Linux port full-time, but there’s no release date just yet.

There you have it folks! It shouldn't be too long if they have a team working on it full-time, but who knows what could happen.

It's a real shame it's taken this long to come to Linux, but one day we will be able to play it.

About the game (From Steam)
In Divinity: Original Sin you take on the role of a young Source Hunter: your job is to rid the world of those who use the foulest of magics. When you embark on what should have been a routine murder investigation, you suddenly find yourself in the middle of a plot that will rattle the very fabric of time.

Divinity: Original Sin is a game that gives you a lot of freedom and plenty of gameplay mechanics to use or abuse. The game's epic story may drive you toward your ultimate end-goal, but how you get there is entirely up to you.

Or up to you and a friend, because Divinity: Original Sin can be played completely cooperatively, and features both online and local drop-in/drop-out multiplayer. Great adventures become even greater when shared with a trusted comrade-in-arms! Article taken from GamingOnLinux.com.
Tags: Humble Store, RPG, Steam, Upcoming
0 Likes
We do often include affiliate links to earn us some pennies. We are currently affiliated with GOG, Humble Store and Paradox Interactive. See more here.
About the author - Liam Dawe

FlutterRageJust saw that it's currently on sale on Steam (-40%), but still: no Tux icon, no money from me..
But nice to know they're working full time on it.

wojtek88 6 Feb, 2015
View PC info
Honestly it's hard for me to believe that there are many people working on linux port of this game. It's been already more than half of a year since game was released. And what's important - linux port was anounced "just after Mac version". Mac version was released the same day windows version was released, linux port is not there yet.
I want to ask everyone who supports linux gaming - do not buy this game until it is officially released for linux, because I have a fear that many companies will learn wrong lesson, that it is enough to say "We will release linux version" but it won't happen at all.
5 Likes, Who?

wojtek88Honestly it's hard for me to believe that there are many people working on linux port of this game. It's been already more than half of a year since game was released. And what's important - linux port was anounced "just after Mac version". Mac version was released the same day windows version was released, linux port is not there yet.
I want to ask everyone who supports linux gaming - do not buy this game until it is officially released for linux, because I have a fear that many companies will learn wrong lesson, that it is enough to say "We will release linux version" but it won't happen at all.

While I don't really judge on speculations (I care for results, even if it may come out late; time is subjective to the individual.), I do agree about not purchasing yet. I think we all have experienced disappointment on announcement releases enough to not deny this. If it happens to come out really late, I'll probably end up buying it on a cheap sale of that time frame. That's the developer's loss, so I don't really care about the process too much. If the port is good and their next game is ready to ship out, then they re-established customer relations to buy it at a higher retail rate.
0 Likes

View PC info
Thanks for the update Liam, this one looks really promising....if it ever arrives!
0 Likes
Ignis 7 Feb, 2015

Quotethere’s no release date just yet

View PC info
I've been very patiently waiting for this one since they had the Penguin symbol on their Kickstarter page. Honestly I was starting to really wonder if they ever would. I purchased this game back when it was in early release on Steam. Made me really reconsider these games that "say they will have a linux port". almost a waste of money, but at least they are now working on it full time. which makes me happy. Now I will finally get to play it... eventually... hopefully lol

that same team does the mac port also, this was from a kickstarter update:

QuoteDevelopment is continuing with things like the Linux version and the hardcore mode still on our lists, but as we want to do this thoroughly, it will still take some time before we’re ready.

The Linux version especially suffered an extra delay as a result of our porting team having to fix a number of compatibility issues that popped up with the release of Yosemite. Whereas we initially hoped to get the Linux version done this year, it looks like it’ll be the beginning of next year now.

We know that’ll disappoint a few among you but bear in mind that we’re doing a real port just like we did with the Mac version.

So its nice they have guys working on it full time, but how many guys might that be and how skilled ?
0 Likes

View PC info
Waiting for the release on Linux and then download via GOG.com!

Until then using my WINE-installation.
0 Likes
1/2»