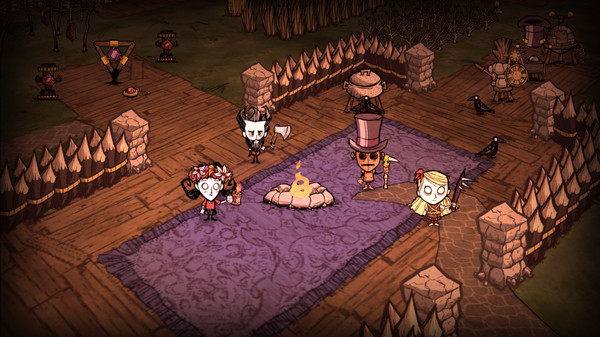 Prepare to fail at survival, as Don't Starve Together is officially being released this month on the 21st of April. Great game, do try it out.

It's an impressive game, and Don't Starve Together has been in Early Access for quite some time. They integrated two expansions from the single-player Don't Starve too. It seems it won't be getting the latest expansion to Don't Starve any time soon though:


QuoteWe don’t have any concrete plans right now. Shipwrecked was built without DST in mind, and we’re going to need to evaluate how much is needed if we were going to do this. We would all love to go sailing with our friends!

They are also planning a free update to Don't Starve Together called "Through the Ages". The main thing it will do is make the game stay interesting over time, as you're likely to be playing for longer since it's multiplayer. They said at launch there will be a small element of that work included:


Quotethe first step of it is coming to you at Launch: we’re putting in small variations to the basic biomes so that every generation feels a bit different, and these will transition over time as you play through the seasons.

See the developers announcement here. Article taken from GamingOnLinux.com.
Tags: Early Access, Indie Game, Steam, Survival
0 Likes
We do often include affiliate links to earn us some pennies. We are currently affiliated with GOG and Humble Store. See more here.
About the author - Liam Dawe

View PC info
Does it use some server, or it can be played over LAN?
1 Likes, Who?

Quoting: ShmerlDoes it use some server, or it can be played over LAN?

It supports online and LAN multiplayer with steam integration. It also has offline mode which, obviously, only gives you access to LAN multiplayer.
0 Likes

View PC info
Thanks, that sounds good. So it won't be tied to Steam? I appreciate when developers provide LAN / WAN multiplayer when one game instance simply runs in server mode. Many developers don't put much effort into that, and simply tie their games to Steamworks for network features.

View PC info
i appreciate when it is tied to steam instead. everything neat and tidy in one place. sweet stuff!... i mean common.... nobody (almost) plays via LAN anymore.
0 Likes

View PC info
Nobody or not nobody, it doesn't matter. Not only it's not tying you to Steam, having the local server option allows playing the game no matter what server exists out there. Too many old games go bust in regards to multiplayer after their servers die. That's not a good thing.

You don't need to use LAN. You can use WAN all the same, if the server component is part of the game and allows running it in server mode.

View PC info
Anyone know if it supports local co-op play? I generally play games with my brother that way, since his computer is too old to play most games these days, plus you only need one copy of the game. Not that I don't already have several copies of this game, but I would love to play it locally with split screen.
0 Likes

View PC info
@slaapliedje: you mean on the same computer?

I didn't find anything conclusive, but I did find this if it helps:
http://steamcommunity.com/sharedfiles/filedetails/?id=172291214

I do hope it has local co-op and LAN, I am much more likely to use those options..

Side thought, I know nothing about the Steam API, but I wonder if it could have a LAN-only fall back built in (or how hard that would really be).
0 Likes

Quoting: pr4vusi appreciate when it is tied to steam instead. everything neat and tidy in one place. sweet stuff!... i mean common.... nobody (almost) plays via LAN anymore.

Please don't generalize to such a degree. I live in an area with rotten Internet access. LAN is the only way for me to play any non-local multi-player game.
0 Likes

View PC info
There is no official local co-op (splitscreen or shared screen) but you can host LAN games without an internet connection. Also, this game literally runs on nothing (I've run it on a laptop with 1.2GHz Pentium dual-core and 32MB shared video memory D: haha). And I guess if you used port forwarding you could host an internet game using the LAN feature, as opposed to hosting through Steam (the way it works with the dedicated server).
0 Likes
1/2»
While you're here, please consider supporting GamingOnLinux on: