DRM has been blown out the airlock, as X4: Foundations for Linux is now on GOG

DRM-free GOG fans rejoice, you can now join the space race as Egosoft have put X4: Foundations for Linux up.

Previously released on Steam, along with a little Beta period the latest space sim will take some time to learn, but it's a thoroughly interesting (and at times quite beautiful) experience. An incredibly detailed game in many ways, although I still often have to look things up as it can be pretty confusing. 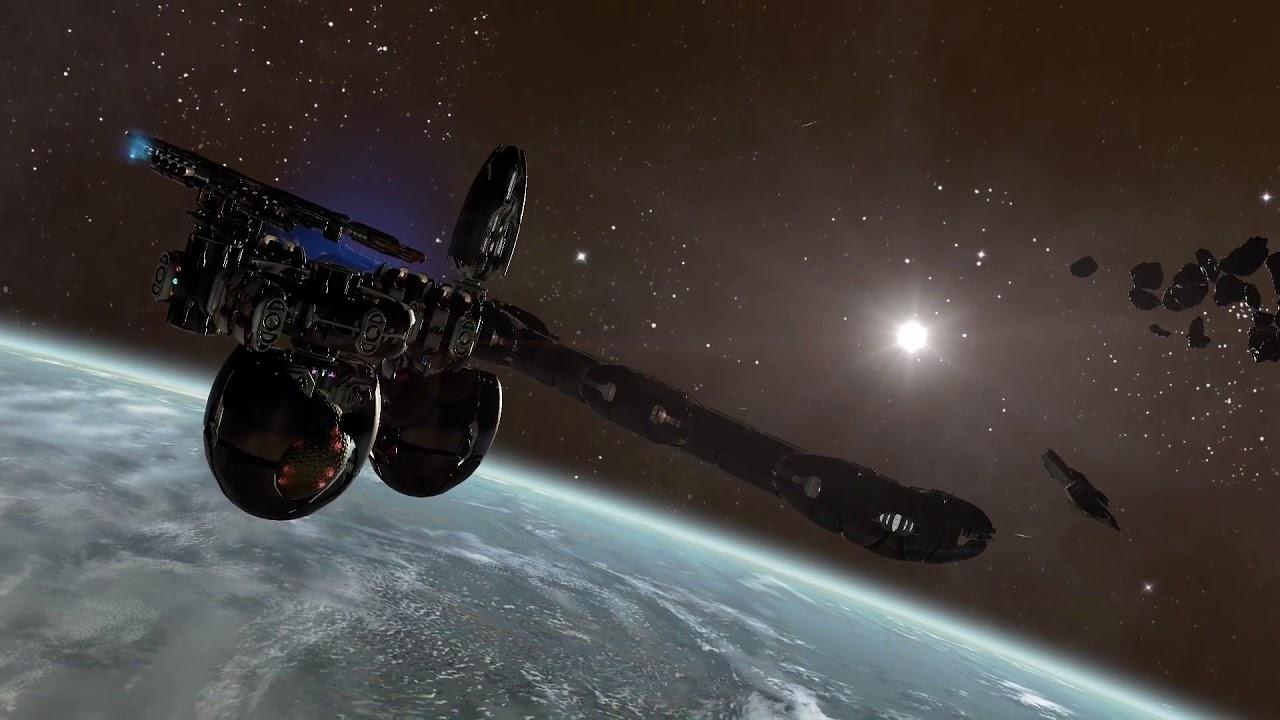 In X4, you can start your journey from a number of different gamestarts and as a number of different characters, each with their own role, set of relationships and different ships and technologies to start with. No matter how you start, you are always free to develop in any other direction. Focus on exploration, make money with illegal trading and theft, command large battle fleets or become the greatest entrepreneur ever. It's all up to you to decide.

Fly on over to GOG for your copy.

If you've been playing it, do tell us about your space adventures in the comments.

Article taken from GamingOnLinux.com.
Tags: DRM-Free, GOG, Indie Game, Simulation | Apps: X4: Foundations
13 Likes, Who?
We do often include affiliate links to earn us some pennies. We are currently affiliated with GOG, Humble Store and Paradox Interactive. See more here.
About the author - Liam Dawe

I am the owner of GamingOnLinux. After discovering Linux back in the days of Mandrake in 2003, I constantly came back to check on the progress of Linux until Ubuntu appeared on the scene and it helped me to really love it. You can reach me easily by emailing GamingOnLinux directly.
See more from me
Some you may have missed, popular articles from the last month:
19 comments
Page: «2/2

SwiftpawFor srlsy though, this game has too many negative reviews and reports of bugginess to make me even want to try it.

Sometimes the majority is simply wrong. X4 is a pretty special game and not everyone has the capacity to grasp it.
I would like to tell my adventures on it like Liam said, however this week I am pretty out of time for it. The best I can offer at the moment are my Steam screenshots.
1 Likes, Who?

Valck 6 June 2019 at 10:58 pm UTC
View PC info
Bought, even before this article went up. Except for Rebirth, I own and have enjoyed every game and expansion in the series, ever since it first released what seems like half a lifetime ago.
While Egosoft do have a history of releasing not-quite-finished products, they also – and that's much more important in my opinion – have a reputation for fixing and supporting their games for years after release.

I only mourn for the boxed version that didn't make it, what a joy that would have been.
1 Likes, Who?

View PC info
I love this game. I played it exclusively for 3-4 weeks when I first bought it and will pick it up again. I played it with the beta 4 of this patch so I'm looking forward to getting back into it.

There isn't as much hand holding as some may want and I'm totally fine with that as I expected it from having played X3 a lot. It's actually one of the things I like about it. The UI etc. needs to be improved but if you have the patience you will be rewarded by trial/error and sometimes just a couple of brain cells will get you there. It does have bugs but saving often is a must anyway as you will have other surprises. That does not mean that I have encountered anything that have been game breaking yet (progress) and I have only had a couple of CTDs in 350+ hours.

I went into this knowing that the guys making it will support it for a long time, have great forums for bug reports and devs that care and interacts with the community. Small company so things takes time. There's already a lot of mods and there'll be a lot more as the time goes. It's kind of like the truck simulator games from SCS.
Lots of guides, YT videos, wiki stuff (also from egosoft themselves) to help you when you need it. I've had to look things up even though the tutorial showed me something 40 hours ago cause.... yeah you forget

It is as relaxing/stressful as you make it but you need to give it time. It's kind of like an MMO where no single part will win an award for best in class but where the overall feel is the big winner if you get hooked.

View PC info
GOG is good but really needed to Galaxy2.0 support for confidence, it wouldn't be so bad if they didn't support MacOS already, but they do, which means their actively avoiding Linux even tho it would be quite easy to release there. That's concerning.

Anyway is this game OpenGL or Vulkan? kinda sick of developers attempting to do OpenGL correctly but failing horribly (Ark comes to mind)
0 Likes

TheRiddickAnyway is this game OpenGL or Vulkan? kinda sick of developers attempting to do OpenGL correctly but failing horribly (Ark comes to mind)

Damn, you both beat me to it.

marcelomendesSad to say but I'm done with buying on GOG until they release Galaxy on Linux. Manual download and updates are things of the past. Yes, I know about lgogdownloader, and no, it isn't a replacement.

I feel your pain. I still like buying games on GOG, but I'm not all-in. If it's a game that I think I'll be playing online with my friends a lot, I pick Steam because 1) I want to know if they're playing it and 2) I want updates to happen without me having to check for patches like the old days. And, with GOG, when there is a game update, I have to download the whole game! For those reasons, I only buy games on GOG that are either single-player or will be played on LAN instead of across the Internet.

View PC info
I honestly quite like the fact that you can install or not update yourself. Sometime the game changes so much from one update to one-other and not always for the best, I even think they should host every single patch, so you can play the version you enjoy the most.

Of course I am also impatient for gog galaxy to be released on linux, I also know gog had difficulties recently, that they are a small team with small budget, and that they have their priorities. They put forward the openness of their galaxy client, the fact that it should work on any platform, therefore I guess linux client should come soon or later. I would not even be surprised if in a couple of year gog could not remain independant and will partner with valve. (which could be a good thing for linux).

Don't forget gog belongs to cdprojekt and that back in the days, they were some of the first linux supporters. When they released witcher 2 it did not get the way people wanted it, but noneless the effort should have been appreciated for what it was. Major RPG + DRM Free was quite original back in the days as every single other editor was advocating for always more DRM. So if you had linux support on top of that, you have a really original company that loves video games and their gamers probably even more than gamers themselves.

Now there are quite a few game on linux and on gog, and they are drmfree, I really don't get why people are so relentless against them. They offer everything an honest editor should offer to their customer : the full disposal of their purchase.

Valck 22 October 2019 at 4:58 pm UTC
View PC info
Just a buyers beware, because it isn't clear from the article, and it isn't readily apparent from the advertising either, until you actually play the game for a bit:

Although it says "DRM free" on the tin doesn't mean it actually is.

Now not everybody may care, but some people do, and here is why:

Parts of the game require GOG Galaxy – which as we all know doesn't exist for Linux – to unlock, specifically a fourth option at starting the game as a Teladi character. This definitely requires modding the game to unlock on Linux.

Also, the so called "Ventures" require you to be online and registered with Egosoft's servers, which allow you to click a button and "send" ships "into other universes" to "collect" rare items and gather crew experience (you don't get to see any of that, they just reappear some time later); some of which you may get without this feature, albeit much less frequently; others you don't.
I haven't tried whether this part works on Linux, and I refuse to, not least because I don't see it as a desirable feature, nor a particularly brilliant example of "gameplay" design.

It remains to be seen whether Egosoft will expand on this "online" feature, or see the error of their ways and remove it, which I doubt – they have already invested into it, and it looks just too tempting to introduce more nifty "features" that let you click a button to be rewarded. And why would they even bother with such trivial nonsense if it weren't that one fine day, that button suddenly requires you to authenticate with the payment provider of your choice?

For the record, I am enjoying the game, and I'm glad I bought it on GOG where at least you have an option to refuse being always monitored online, if at a price.
For the time being.

I will definitely not preorder any future X games, and only even consider buying them once they are proven to be truly free of surveillance DRM and microtransactions. I wonder if alleged "piracy" makes up for even a fraction of the "losses" you "incur" over the guaranteed income you lose by alienating your audience.


Cheers Egosoft, this is coming from a fan of your games from day zero.