The team behind the free and open source 3D creation suite, Blender, are once again celebrating as they've managed to secure even more funding from some interesting names.

First up, Embark Studios announced today they have become a Corporate Gold level patron of Blender meaning they're pledging at least €30K a year which isn't exactly a small amount. Speaking about why they did so, their team wrote a little love letter Medium post. Additionally, Embark announced their plans to open source some of their own Blender tools which you can find listed here. The two current tools listed are on GitHub under the MIT license.

On top of that, it seems AMD didn't want to be left in the dark by NVIDIA sponsoring the project so they've also thrown some money into it. AMD are pledging at the Corporate Patron level just like NVIDIA, so they're giving the Blender Foundation at least €120K a year. Speaking about it on Twitter, the Blender team said:

Today AMD joined the Blender Foundation Development Fund at Patron level. We will invest it in general development, Vulkan migration and to keep AMD technologies well supported for our users. Thanks a lot!

Another that we missed recently that was announced last week was Adidas also joining in, although at a much lower Corporate Silver level of funding, so they're pledging €12K a year.

You can see more information about Blender's funding on this dedicated page.

So in the space of a single year that's NVIDIA, AMD, Embark Studios, Adidas, Epic Games and Ubisoft. I have to say, I'm genuinely amazed that all these companies are suddenly realising how essential open source programs can be to their workflow so they wish to actually help protect them. Happy to see this happen and since Blender has great Linux support, it's just good news all around.

View PC info
What does Adidas have to do with Blender? 3D models in advertisements made with it?
2 Likes, Who?

View PC info
I've always considered content creation something that has held back development of games on GNU/Linux. This kind of additional funding is welcome news indeed; ok, it's not aimed at GNU/Linux in particular, but open source software has a habit of being cross-platform.

Quoting: trawzWhat does Adidas have to do with Blender? 3D models in advertisements made with it?

View PC info
Yeah was wondering about Adidas as well.
Maybe something they can write off as charity :D
1 Likes, Who?

View PC info
3D models are a part of a lot of design work, and Adidas are probably also interested in the applying physics behind material design to how it would look during physical activities. Their funding might extend that, and end up being a viable alternative to other, proprietary, offerings that they can't control as effectively (i.e they can't dictate the direction of development to suit just their own needs).
2 Likes, Who?

View PC info
That's great news. Blender is really picking up some support lately! I guess we might be able to see some pretty good new updates down the road!
0 Likes
Purple Library Guy 23 Oct, 2019
Turning into quite the bandwagon. Jolly good!
0 Likes

View PC info
So, Nvidia sponsored Blender to support CUDA lock-in, and AMD sponsored it to support portable Vulkan? Or that funding goes to any work Blender developers see fit?

Seems like they get some control over where the funding goes. According to their page: 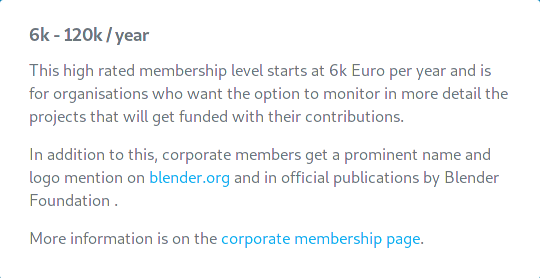 QuoteThis membership level is for organisations who want the option to monitor in more detail what will get funded with their contributions. They will get direct access to the Blender team for strategical discussions. Roadmaps and priorities will be aligned with your requirements as good as possible.

Blender Foundation will actively reach out to Corporate members to discuss the bi-annual planning for grants and review past supported projects.