Empires, a Source SDK hybrid of FPS and Strategy looks like it's coming to Linux 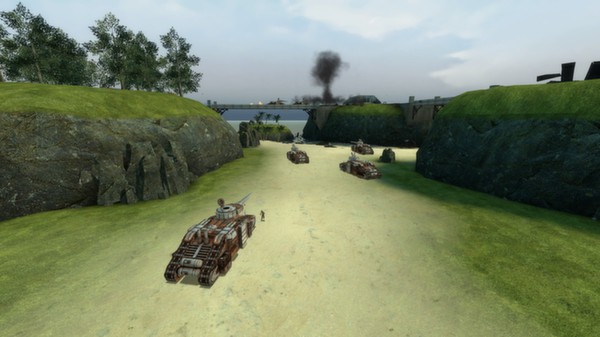 Empires, a Source SDK game that's been around for quite a long time looks like it's coming to Linux, can't wait to try it.

Checking up on SteamDB it seems they are working right now on Linux support!

In October last year the mod changed hands, as the development leader stepped down. They also want to make it open source, but they need the blessing of the original creator. See this post for details. Linux was mentioned in that linked post too reading further down.

It looks like they may be moving to Unreal Engine 4 at some point too, so that's awesome news.

About the game (Official)
Empires, the award winning Source SDK game, combines the best of the first person shooter and real-time strategy genres. Fight as either the Northern Faction, remnants of the fallen nation of Jekotia, or as the imperial Brenodi Empire.

Four infantry classes - Prepare a surprise attack as the scout or take the enemy head-on as the rifleman. Drive back enemy tanks as the grenadier or support your team as the engineer. With four different infantry classes, each with customizable skills, you can create the perfect class to fit your playing style.

Squad-Based Teamwork - Players can organize themselves into highly-effective squads, overwhelming their opponents with superior tactics. Squad leaders can not only direct their respective members, but also use special squad powers such as reviving dead squad members or calling down an artillery strike on the enemy.

Vehicle Combat - Whether you're ferrying troops around the battlefield with the Armored Personnel Carrier or reigning fire upon your foes with the Artillery tank, Empires features a variety of vehicular combat. Choose from six different vehicle types, including three levels of tanks, and customize your weapons, armor, and engines.

View PC info
Oooh yeah this mod used to be a blast.

I really wish it went opensource and had some new blood pour in. It's amazing.
0 Likes

Quoting: GuestThey're moving to UE4 instead of upgrading to Source 2 when the latter has Vulkan support? A little odd but okay. Not that UE won't have it as well soon.

View PC info
Source is just really bad at handling vehicles and generally mass physics and there hasn't been any Source 2 games yet to disprove that.

UT4 is also open source so they will have much easier time adapting the engine to anything they might need.
0 Likes