By Samsai - 27 December 2015 at 7:30 pm UTC | Views: 18,772
It's been a while since I last dug up my 760 and did some benchmarking, so I decided that I would run some to celebrate the last days of 2015. I've picked some new games this time around to show the performance of both the open source and the proprietary drivers.

Like I said, this time around I have ditched the Unigine benchmarks in favour of some Source games, Talos Principle and Xonotic. I really only have two reasons for this: I wanted to test real-world performance and I am still quite happy about figuring out how the Source demo files work. If you are interested in the Unigine tests you can find results here and here.

Before we get to testing let's talk a bit about the driver setups. On Nvidia I went with the Proprietary 355.11 drivers after I found the 358 drivers to be extremely unstable. The Nouveau tests were done on Mesa-git (11.2) from Oibaf. Nouveau is also limited to the second highest performance level due to driver limitations on the kernel side. For AMD the proprietary driver of choice was Crimson 15.12 and on the open source side I used the stock Mesa 11.0.2 built with LLVM 3.6. I am not using the bleeding edge drivers from PPAs like Padoka due to bugs which can negatively affect performance of certain titles or prevent them from running at all. 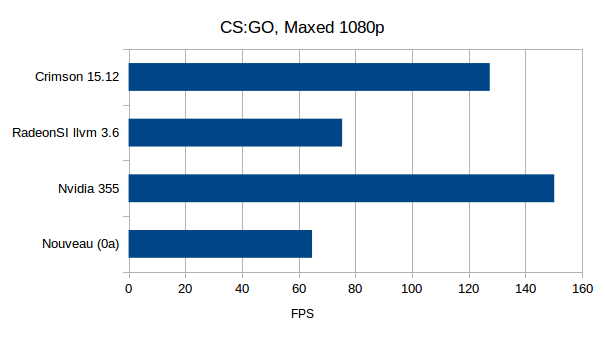 Counter-Strike: Global Offensive is among the most played games on Steam so naturally its inclusion makes perfect sense. CSGO, like other Source games, is not extremely demanding which is why I decided to max it out. All drivers did well in terms of playability and it was quite surprising to see Nouveau get as close to RadeonSI as it did, considering that the 760 only gets clocked to its second highest performance level due to driver limitations. It did dip into around 40 FPS every now and then so the experience wasn't perfect but quite good nonetheless. 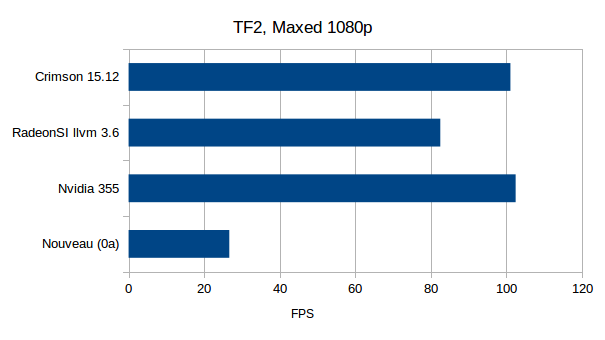 Here something interesting happened. I seem to have hit some sort of a performance bottleneck or something along those lines because Crimson and Nvidia blob ran at nearly the same framerate. It certainly would be fun to believe that this is a sign of performance parity but I highly doubt that. On the open source front Nouveau took a serious dive to around 25 FPS average and dips to 15 FPS. It would seem that maxed out TF2 simply isn't something Nouveau likes. RadeonSI on the other hand handled the game just fine and looks to be gaining up on the proprietary drivers. 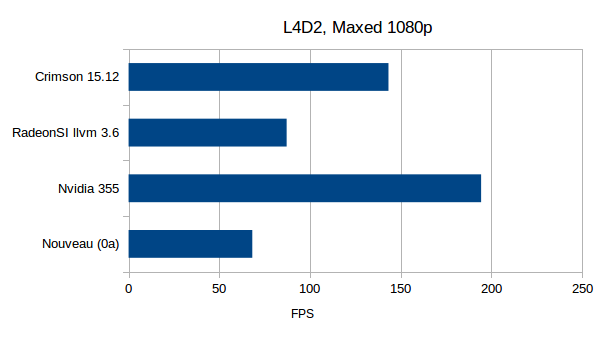 Left 4 Dead 2 looks quite ordinary when it comes to the performance graphs I've made in the past. Nvidia blob runs ahead of the competing AMD proprietary driver with a performance delta of about 50 FPS. RadeonSI is still quite a bit slower than its proprietary brother but the overall performance was still quite satisfactory, 87 FPS on average. Even though Nouveau is, as usual, tailing the driver group it still performed at playable 68 FPS average. 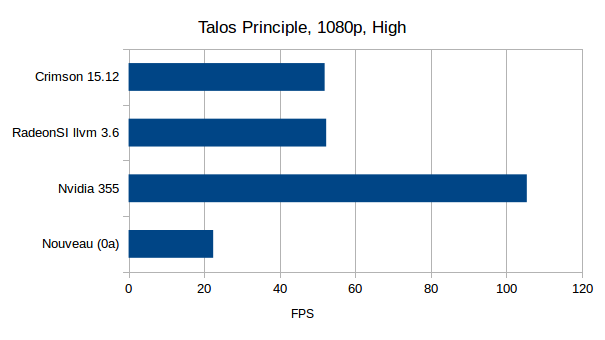 It's time to leave the Source games and take a look at a game that was requested a couple of times in the past. Talos Principle is a very good looking game indeed and it can be quite punishing at times. Interestingly, the Crimson and RadeonSI performance was almost identical. However, the rendering results were not quite: RadeonSI had some trouble rendering the shadows in the correct places and on Nouveau I noticed multiple split-second graphical glitches. Both Crimson and the Nvidia blob rendered the game perfectly but Nvidia's performance was simply outmatched. I normally either set the settings to maximum or to the lowest in benchmarks but here I decided to be a little bit more conservative and went with mainly High settings. On Nvidia the game could have been pushed quite a bit more without losing the smooth gameplay experience. 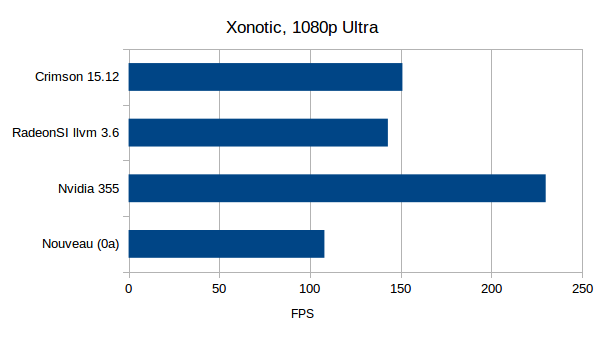 Finally, I ran some benchmarks of Xonotic. This game uses a very mature game engine and calling it graphically intensive would probably be a bit of a lie. This game has been heavily optimized and it can be run on almost any modern hardware. Still, it's a nice game to test since it works everywhere and still manages to look quite good. RadeonSI was very close to Crimson once again and this time no rendering issues can be blamed. It would appear that RadeonSI will soon reach and possibly surpass the proprietary driver in some games where it has typically lost to the blob. Still, there is a long way to go until the performance of the Nvidia blob is reached. Nouveau was also very playable, which isn't all that surprising with this game.

2015 has been a very good year for Linux gaming and possibly an even better year for the open source drivers. OpenGL 4.0 support has started to arrive in all three major open source GPU drivers and quite a chunk of the Steam games available to us Linux users is actually playable on the open source stack. It's not just a game of catch-up anymore either, since porting houses like Feral Interactive and some game developers have been looking into the open source drivers quite a bit and their efforts to both support and fix the open source stack should also be applauded. There is still plenty to be done both on the OpenGL implementation and the optimization side but if you ask me, the future looks quite bright indeed.

So, that's it for the native games section. I have also prepared something that has been asked furiously by some individuals which you can find on page two. Article taken from GamingOnLinux.com.
Tags: Benchmark
0 Likes
Share

I'm a Linux gamer from Finland. I like reading, long walks on the beach, dying repeatedly in roguelikes and ripping and tearing in FPS games. I also sometimes write code and sometimes that includes hobbyist game development.
See more from me
Some you may have missed, popular articles from the last month:
The comments on this article are closed.
15 comments
Page: 1/2»
Xaero_Vincent 27 Dec, 2015
View PC info
I wonder how 1.7.55 Nine with RadeonSI would compare to 1.8 Staging w/ CSMT enabled and Catalyst 15.12 and Nvidia 355.11.
0 Likes

View PC info
A lot of those games are fairly old by now, and even The Talos Principle uses just OpenGL 2.1. Would be interesting to see more modern/recent releases that push GPUs harder, like GRID Autosport, Metro Last Light Redux, and such. I don't care about Wine since I don't buy Windows games.

That all being said, the AMD results are pretty good, especially since the 760 is a considerably better card, technically. http://gpuboss.com/gpus/Radeon-R7-370-vs-GeForce-GTX-760#differences
3 Likes, Who?

It's nice to see games starting to play fine on open source drivers. Especially what they did with gallium nine is really nice.

I would like to see some ports offering 9 as an option if available. Does someone knows if VP ports currently use 9 if available? (and if it is a DX 9 game)
0 Likes
Samsai 27 Dec, 2015

It's nice to see games starting to play fine on open source drivers. Especially what they did with gallium nine is really nice.

I would like to see some ports offering 9 as an option if available. Does someone knows if VP ports currently use 9 if available? (and if it is a DX 9 game)

Nine is only used by Wine at the moment and to do that you need a patched Wine version, vanilla Wine won't support it. I think that it's unlikely we will see any support beyond that.
0 Likes

I know Skyrim can run much better on a 760 with CSMT on (as I run it that way on a 760 myself), I wonder what would the results be with RadeonSI + CSMT.

Nice benchmarks. Hopefully we will see the same kind of advancement with Vulkan as we see with nine (thinking of the bad AMD OpenGL performance).
0 Likes
FutureSuture 28 Dec, 2015

View PC info
Seems like AMD's advantages consist of having a capable open source driver and that very same open source driver boasting incontestable, superior performance in Wine with Gallium Nine the vast majority of the time, even overshadowing Nvidia's mighty proprietary driver considerably. Many thanks for these benchmarks, Samsai!

Many of us undoubtedly have games left from our Windows days which are unlikely to come to Linux, or some might even still have Windows around for that one game or two. Needless to say, this alleviates the problem significantly, and makes AMD worth recommending not just if one cares about open source software, but if they do a lot of gaming in Wine as well.
2 Likes, Who?
PsynoKhi0 28 Dec, 2015
Regarding The Talos Principle, Crimson and radeonsi being evenly matched would hint at a lack of game profile for the game. A bit like CS:GO a while ago, of all the Source engine games it was the only one that didn't share the same name for the executable binary. Renaming it to hl2 was a short term hack for a quick +50% boost.
Does TTP share the same engine as Serious Sam 3? The binary for the latter is called Sam3, and there is a Crimson profile for it. What's the name of the main launcher for TTP? Worth giving it a shot.
0 Likes
1/2»
While you're here, please consider supporting GamingOnLinux on: