The latest immersion pack, or small piece of thematic DLC, has been released for the massive grand strategy title. I got to try my hand at ruling the British Isles and have a few thoughts to share. 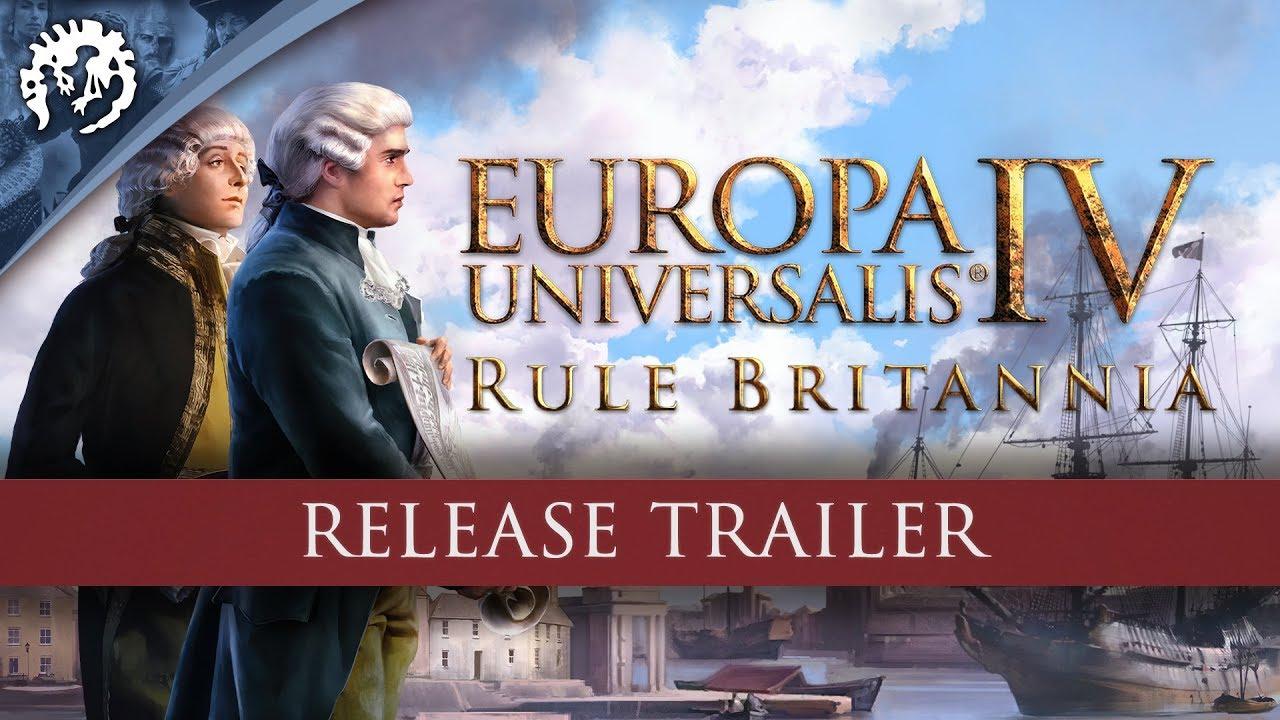 Europa Universalis IV [Official Site] is a massive, complex beast of a game and it’s been getting large changes in both patches and expansions over the last few years. Rule Britannia is a bit more modest than the usual fare, focusing on enriching the experience of playing as one of the British powers.

Before getting into the DLC features, I should mention that a sizable patch has been released for everyone. The patch includes quite a few changes to the map. Ireland has seen the most obvious changes but areas in continental Europe, specifically in France and the Low Countries, have also gotten some attention. Some of the countries in these areas have also gotten new national ideas, making them unique to one another.

The biggest change, however, is the overhaul of the mission system. It’s no longer a random set from which you can pick a mission. Instead, it’s a tree-like tab now that shows how your nation might progress, displaying both the conditions to trigger them and the reward. It was a much-needed overhaul as the new system lets you plan ahead and see where your nation might end up. As with the previous system, missions remain optional and are a way to adding a little bit of guidance to what is otherwise still a wholly sandbox experience.

There’s a few other miscellaneous things that were added in the patch, including balancing changes. You may wish to check out the full patch notes here. 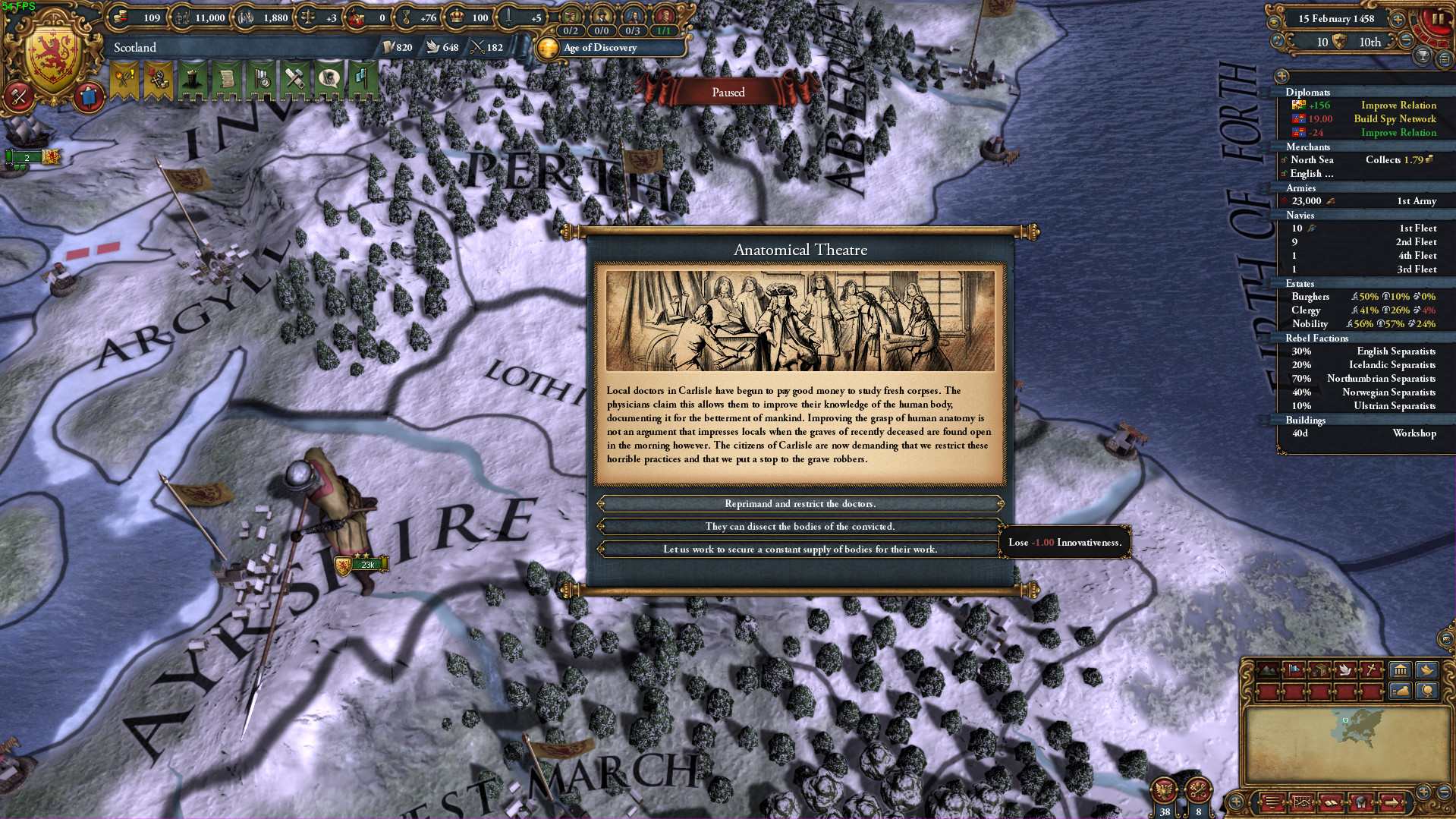 The DLC content builds on some of these free changes. The Irish minors, Scotland and England have all gotten their own distinct missions. These trees do add a nice amount of flavor to each but unfortunately I found that ultimately they all sort of converge on the same final point: mastery of the British Isles. Sure, you might be thinking, that’s logical enough. In practice it means that leads to complete conquest, no matter who you pick to start out as. Having more fleshed out missions for the colonization bits of the tree, for example, could have provided a different kind of path for these nations to follow.

Upon forming Great Britain, a decision that’s possible once you control the British Isles, there’s a new set of missions that you can play around with. It’s a good mix of historical British feats and a few short hypothetical branches that will really challenge players. I won’t spoil that for you as I think that that’s a good bit of fun to find out for yourself.

The last of the British-exclusive features include Anglicanism, which can spawn on the isles at some point after the reformation begins. It’s somewhat close mechanically to Protestantism in the game, in that you gain church power, but instead of choosing permanent bonuses, you can instead select one-off actions. Some of these, like divorcing your consort, are a little context-specific but others like raising your stability or mercantilism. I’m not exactly a power gamer by any stretch and I didn’t crunch numbers but I think it’s an adequate alternative to the other Christian denominations that’s not too under or over-powered.

The other DLC features aren’t really specific to the British. Coal and furnace manufactories are powerful late game additions that I think rightly captures the massive transformation that the first industrial revolution managed. Directly related is the innovative value that every nation now gets. This is a sum of how much of a pioneer in the sciences you are, gaining points mainly for getting new techs first or adopting ideas first. Having a high value for it grants a few boons like reduced monarch point costs for actions. There are a spate of new events related to the mechanic, raising or lowering the value and firing at certain levels of it. I always appreciate seeing new events and decisions but in the grand scheme of things, it’s not exactly revolutionary stuff.

The problem is that Europa Universalis IV is already a pretty complex game. Adding a new gauge that keeps track of some new value doesn’t really make a significant difference in how I approach the game. Especially if it’s always better to have higher values than lower. Even after playing several games (though not fully from beginning to end, it should be noted) I found that it wasn’t something I had to worry about or even really plan ahead for. Oh, sure, there’s tradeoffs to be made in some event choices but there’s no reason not to want your innovativeness to be as high as possible. 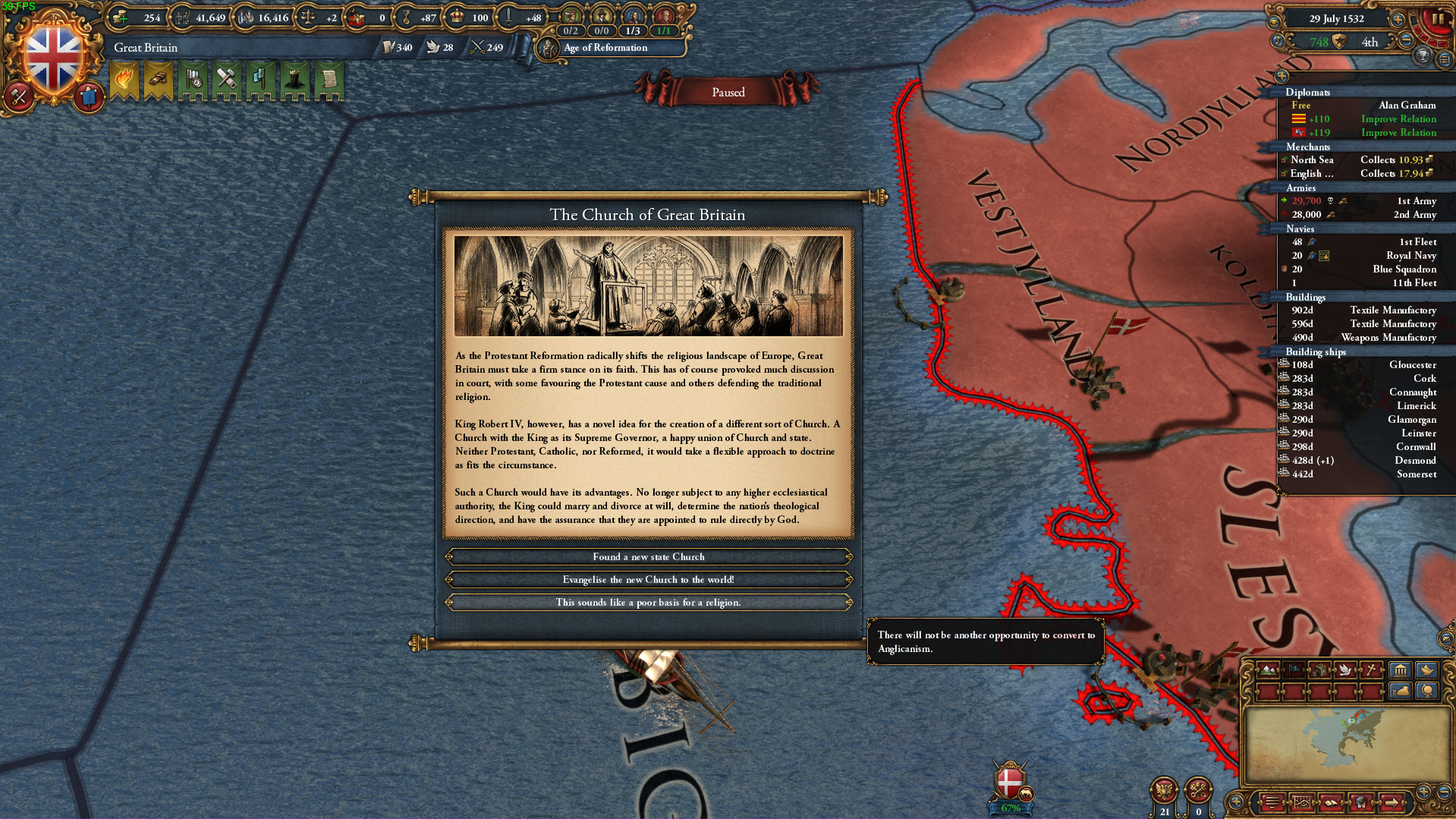 There’s a few other features, like being able to demand trade steering in a peace deal and setting a naval doctrine for your fleets that are also part of the immersion pack. They’re situational, the latter being a neat little way of customizing your navy at a significant cost in gold. But they’re not really game-changing sort of additions either. I found myself enjoying the new unit graphics for, say, Irish minor nations or the excellent new music on a whole more than these mechanics.

And that’s more or less how I feel overall about Rule Britannia. There’s really nice things and attention to detail in things like events, graphics and music. Things like new mechanics and gameplay features don’t make much of an impact by contrast. None of these additions make the game more tedious or bad by any stretch but, at the same time, they have limited impact on the overall EU IV experience. Coal is the biggest strategic shakeup in the game in quite some time and that comes into play relatively late into the time period, by which time most players will likely either already be very powerful as to not really care or have already moved on to a new campaign.

I think Paradox Development Studios have yet to figure out exactly what these smaller immersion packs should contain. As is, more hardcore players will be underwhelmed by the new mechanics that affect everyone. And, on the other hand, casual players looking for pure flavor and ‘immersion’ when playing British nations might be disappointed that they aren’t getting even more events, graphics and music for what they’re paying. The recommendation for this one is a little nuanced: it isn’t bad, doesn't change the EU formula too much while adding a few interesting bits and bobs but if you’re not planning on playing much in the British Isles much it may be best to skip it.

You can get Rule Britannia on Paradox’s Webshop or through Steam.

Article taken from GamingOnLinux.com.
Tags: DLC, Review, Steam, Strategy
7 Likes, Who?
We do often include affiliate links to earn us some pennies. We are currently affiliated with GOG and Humble Store. See more here.
About the author - BTRE

View PC info
Just picked it up, and had an idea for an "Only British Boats Allowed!" campaign: first, take over the British isles, then conquer every bit of land that touches an ocean in the world! Only we may have boats! :D
0 Likes
While you're here, please consider supporting GamingOnLinux on: