F1 2017 could be on the way to Linux, as Feral Interactive want to see demand for it 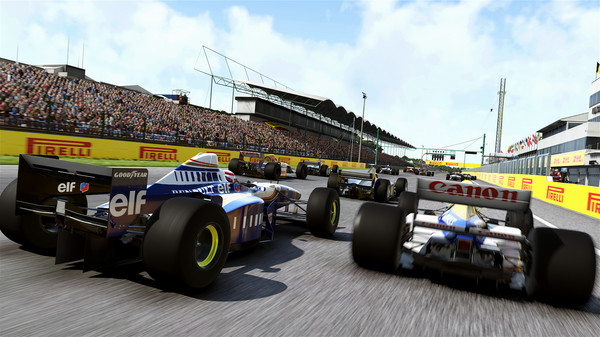 Feral Interactive are up to their usual teasing once again. They've announced F1 2017 is coming to Mac, but they're also directly requesting to see demand for it on Linux.

Should Linux re-join our FORMULA ONE team with F1 2017? It won’t be this month if they do, but show us there's demand! #THEREQUESTINATOR pic.twitter.com/MLuN2IJAyv

I believe this is the first time they've ever asked the Linux community about demand for a specific game. The interesting thing really is their wording "It won’t be this month if they do" meaning there's a real chance.

Considering they previously ported F1 2015 to Linux and said F1 2016 won't be ported as sales of F1 2015 weren't strong enough, maybe they're going to test the waters once again? I imagine if F1 2017 is actually reviewed better, it would sell better.

Article taken from GamingOnLinux.com.
Tags: Feral Interactive, Racing, Teaser
12 Likes, Who?
We do often include affiliate links to earn us some pennies. We are currently affiliated with GOG and Humble Store. See more here.
About the author - Liam Dawe

So if you are not sure about your thoughts upon an F1 game , don't give them promises.
15 Likes, Who?

View PC info
I'm all for more Linux games, but personally I'm not a big racer and there are a lot of racing games already. I'd rather have them focus on another game, the F1 games have disappointed quite a bit too.
3 Likes, Who?

View PC info
I suppose F1 2015 was a bit of rotten luck. It was released for Linux fairly late (only a couple of months before the 2016 one). By then it was well established that it was one of the weakest games in the series. Combined with F1 racers being a bit of a niche of its own, it's easy to understand that things didn't go exactly well there.

As for F1 2017. Accurate racing is not really for me. Something do with... What's it called? ... Oh yeah, patience. But throw in Bioshock (which is in my library already) and I'll get it on general principle. :P
6 Likes, Who?

View PC info
F1 2015 was indeed a risky bet. I mean, it was a poorly-reviewed niche game coming to a small OS. Basically the only thing it had going for it was that it was Linux's first F1 game and one of its first AAA racing games, so I hope they weren't counting on it being a huge success.

F1 2017 on Linux would still be a niche game coming to a small OS, but it's shaping up to be a great game, possibly the best in the franchise so far. I won't dare try to figure out how these factors balance out, but I hope Feral has taken all that into consideration when making their projections. Anyway, as someone who actually enjoyed F1 2015 a lot and plays it to this day, count me in as a customer!
6 Likes, Who?
mcphail 18 Aug, 2017
I'd love to play this game on Linux. The minimum specs would need to be quite low for me to run it, though. My machine could just about manage F1 2014 when I had a Windows partition. I didn't buy 2015 as it was a horrible iteration.

I would imagine the population of f1-loving Linux gamers is very small indeed, and some of us can't run AAA spec games. I will buy it if there's a chance I can run it, or in the future when I upgrade my hardware.
0 Likes

View PC info
I wish I could spend money on a wheel and really get into my racing games, but the last time such a title really grabbed me was Forza 2, about 8 years ago when I still had a console! I didn't buy Dirt Rally and honestly, I'd struggle to buy this. I did just spend £30 on Dawn of War III on the Humble store though, went to redeem my code in Steam and discovered a shiny 50% off voucher... enjoy my wasted tenner, Feral! :)
0 Likes

Quoting: mcphailI will buy it if there's a chance I can run it, or in the future when I upgrade my hardware.

I'd advise you to check out the published system requirements for F1 2017 before deciding on your purchase, remembering requirements for Linux are usually a bit higher than Windows for DirectX ports. That said, I run F1 2015 on my first-gen i5 with 8 GB of RAM and a GTX 650 Ti on mid-max settings without a problem, even though it's just above the minimum specs.

View PC info
If they bring out Total War Warhammer 2, heck any Total War or Warhammer game that I don't already have & I'll be all over them, I really don't do driving games, I have a couple including F1 2015 but I'd much rather have a good fantasy/scifi game with an immersive storyline & loads of bad guys to hack to bits or shoot.
2 Likes, Who?

View PC info
Too much racing games.
3 Likes, Who?

View PC info
Not interested. Please port the games the majority is begging for all the time (like Rise of the Tomb Raider).