So, you all heard about Facebook buying Oculus Rift right? I considered doing an article last night, but I decided to let my own and everyone else's hot heads cool down a bit. 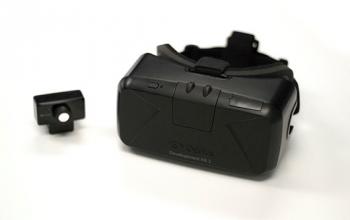 You should all know my thoughts on VR by now, I don't like it and it is as simple as that. I don't want to strap some big ugly device to my face and block out anyone else in the room to play a game. I don't know anyone else if my own circle that want to either regardless of what platform they game on, they simply don't want to.

Anyway, Facebook has purchased Oculus VR for 2 BILLION DOLLARS and a wave of developers have already cancelled their Oculus Rift games.

Oculus' own blog comments say it all, their first and top voted comment is:

That is the first comment you can see on it.

It has led figures such as Notch to outright cancel Minecraft on the Rift:

We were in talks about maybe bringing a version of Minecraft to Oculus. I just cancelled that deal. Facebook creeps me out.

A funny fact is that John Carmack who previously worked for id Software (Doom, Quake, Rage) moved to Oculus VR, he now works for Facebook because of it.

For the record, I am coding right now, just like I was last week.I expect the FB deal will avoid several embarrassing scaling crisis for VR.

Sadly though, this won't mean much as their entire indie "cred" has vanished with the announcement. Facebook is interested in gaining users and monetizing them and nothing more. Selling VR kits to gamers will not be even close to the top of their "things to do with Oculus" list.

Simon Roth, the developer of Maia put it quite well:

Imagine how crap their Kickstarter backers must feel. Gave them all that cash just to line their pockets with a tech bubble style sell out.

NotchAnd I did not chip in ten grand to seed a first investment round to build value for a Facebook acquisition.

Say goodbye to VR as we knew it, or rather as we didn't know it since the consumer devices weren't even out yet.

Oculus needs to do some major damage control.

Article taken from GamingOnLinux.com.
Tags: Editorial, Hardware
0 Likes
We do often include affiliate links to earn us some pennies. We are currently affiliated with GOG, Humble Store and Paradox Interactive. See more information here.
About the author - Liam Dawe

I am the owner of GamingOnLinux. After discovering Linux back in the days of Mandrake in 2003, I constantly came back to check on the progress of Linux until Ubuntu appeared on the scene and it helped me to really love it. You can reach me easily by emailing GamingOnLinux directly.
See more from me
The comments on this article are closed.
38 comments
Page: 1/4»

Let's wait and see what is happening next, this is not a bad new per se.
0 Likes

View PC info
I had to see the top comment on their blog, and then saw the irony of the comments being done via facebook.
0 Likes
Liam Dawe 26 March 2014 at 12:02 pm UTC

mirvI had to see the top comment on their blog, and then saw the irony of the comments being done via facebook.

View PC info
This is incredibly damaging to Kickstarter. I suspect that most hardware based Kickstarter campaigns will now face a torrent of cynicism as a result of this. Kickstarters have a hard enough time gaining trust in the face of the Ouya shenanigans - I hope I'm wrong, but this could wreck everything.

As for Oculus itself... I was about to pre-order the crystal cove edition just last weekend. Glad I didn't, and I won't be touching it now. I suspect that continuing Oculus as an open platform died with this announcement.

Finally, what will Valve do? They've staked their colours to VR as the future of gaming. I guess they'll revive their own headset (assuming they buried it in the first place) and sell it as a Steam Machine peripheral. Hopefully it will remain open and cross platform.

That's really nasty. I was sooo looking forward to that :/ Now I can only despise them

SteamVR is the future now, at least we can count on our lord and savior GabeN!
0 Likes

View PC info
I had to check the date twice this morning, I thought we have April the 1st. Well, definitely no Occulus for me then :/
I hope Valve will bring a VR now.
0 Likes
Anonymous 26 March 2014 at 1:08 pm UTC