Feral Interactive have begun re-teasing the "West Norwood" clue that appeared recently and then vanished, it's back to tickle our brains once again.

This one has had a bit of an odd ride, as it appeared together originally with Mac, then it was split up and then it vanished only to reappear now.

On their famous port radar is this: 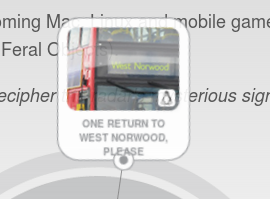 It's time to get those thinking caps back on and dive into the comments with your thoughts.

Whatever it is, it's due "Very Soon" according to the section of the radar it's in.

Since the mac icon has gone, it has to be that. I still can't work out the clue the though.
1 Likes, Who?

To quote myself from https://www.gamingonlinux.com/forum/topic/2904

QuoteStrange indeed. I would still go for F1 2017 since that was just released to Mac.. but I hope that I'm entirely wrong and that I soon have to spend some money for F1 2017 _and_ something very cool I don't know yet :)

View PC info
From all I read from Feral, F1-2017 is nearly granted so I would like it to be another game. It would make 2 Feral ports for the price of one radar signal and from the previous post, Rise of the Tomb Raider seems likely.

Nothing impossible, last fall we saw Mad Max and Deus Ex: Mankind Divided happen back to back, within a month.

Please Awesome Feral, let it be so! No pressure intended. :)

Edit: If it's about the Mac icon that's gone, shouldn't we consider Bioshock Remastered too, then ?

Edit2: This said, F1-2017, Rise of the Tomb Raider and Bioshock Remastered are all insta-buy to me. So porting all of them would be the best case scenario.

View PC info
bah why they don't port tomb raider... They don't like money? wtf
4 Likes, Who?
afettouhi 5 Sep, 2017
Here's hoping it is Rise of the Tomb Raider. But also hoping that they do a port of the new Life is Strange prequel. But the Bioshock Remastered would also be very cool because I already have it in library on Steam and I played through Bioshock two times in wine didn't finish the second playthrough though was hoping that a port was coming at some point.
1 Likes, Who?

veccher 5 Sep, 2017
View PC info
it's a game that would be ported to mac and linux, they tought about not porting it to linux, the mac port would come first, now they decided to bring it to the radar again, and there's just the linux port left.

Not a fan of racing simulators, but it's clear it's F1 2017, hope you guys enjoy it, i will be waiting for TR, doom nier, or something like this. anyway, good to have a port near day 1 on linux.
3 Likes, Who?
1/3»
While you're here, please consider supporting GamingOnLinux on: