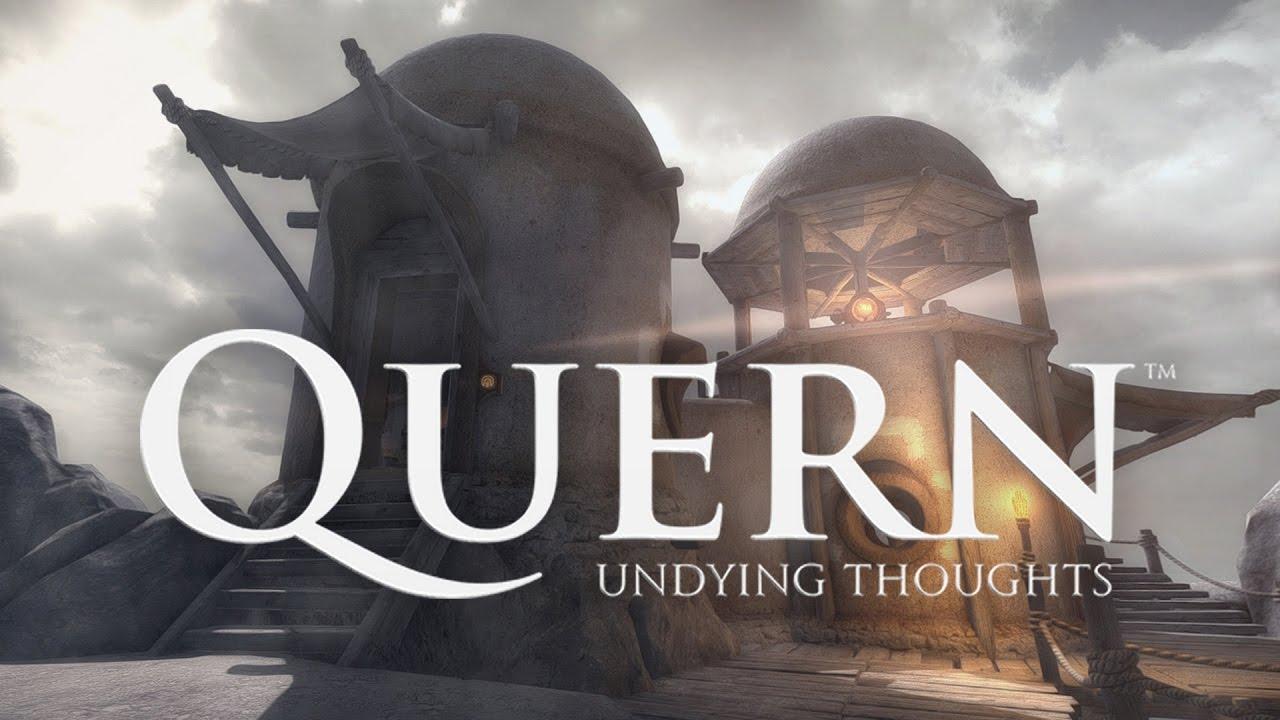 YouTube videos require cookies, you must accept their cookies to view. View cookie preferences.
Accept Cookies & Show   Direct Link
Quern - Undying Thoughts, a first-person puzzler inspired by the likes of Myst and Riven has been released on GOG and they have a Linux build too. In the interest of full disclosure: My GOG contact sent over a key to take a look.

Since the release, the developers have put out a few patches that have fixed some initial concerns. The ability to change movement keys, VSYNC support, you can climb down ladders now (that wasn't possible before apparently?), more resolutions supported and more.

I actually played both Myst and Riven and remember them very well, being fantastic puzzle games that really made you think. Quern - Undying Thoughts is very much like them in practically every way. It's a very slow game and certainly not for the quick thinker, you will need an abundance of patience with this one.

The initial starting sequence is short, to the point and starts you off already wondering just what the heck is going on. You awaken looking at some kind of portal, which quickly self destructs. You have no idea how you got there, or where there is exactly.

You come across a letter, from a Professor William Maythorn who has trapped you in this strange land, he claims we should consider ourselves lucky as we get to study all his discoveries and share his knowledge. It's a funny kind of arrogance to claim you're lucky to share it with him, as if he's incredibly important to everyone, when you have no choice in the matter.

Quern, is the name given to this "Forbidden World" by the professor, who has spread plenty of letters around for you to find and read. The letters have voice overs done on them too, which are just as impressive as the rest of the game.

You find out that the world you're on is one from Myths of an ancient civilization, the Dulmar, who sound like they vanished a long time ago. There's so much to learn, so much to think and considering how lonely it is, it feels very much like Myst and Riven.

The puzzles are clever, often with the answer right in front of you yet the design is so good that you don't even realize it. Still, with Quern, knowing the answer doesn't necessarily mean it's easy to get to the solution. It requires a fair amount of creative thinking and problem solving not found in many games today. You will be moving blocks, finding missing items, reading books, dealing with crystals and so much more. It's not all amazing, as some of the puzzles were a little annoying to do, but other than that I can't really say anything bad about it.

You have a handy notebook the professor left you, so if you see something you think might help at some-point, you can make a sketch of it. This is important, so remember it and make lots of sketches and notes. It really does prevent a lot of annoying backtracking which would have been required otherwise. The notebook does have flaws though, the first being how slow it is to go through all your notes and the picture quality obviously isn't as good as having the real thing to look at again.

Performance wise I have it on high settings and it's been very smooth, no major dips, no stuttering just buttery smooth goodness. Although, I did have one annoying issue: upon solving a particular puzzle involving light, the game froze up and then quit to the desktop. I sent my Unity log to the developer for that. It seems to be related to some of the graphical options, but I haven't been able to pin-point which one does it.

I have yet to finish it after being stuck numerous times already (and it't not exactly a short game), but it's an easy one to recommend. A game I wished I had played sooner, as it's really good. You may get lost, you may get frustrated, but try not to seek a walk-through, as it's pretty fun to see the results of each puzzle getting solved. Anyone who played Riven and Myst should consider this an essential purchase.

View PC info
Are they real puzzles, or try and repeat puzzles ? I mean, a quick example i have in mind : a piano with 20 keys, find the correct 8 keys and in order, to open the door, is try and repeat. If there are clues to find the keys immediately if you think well, then it's real puzzles. In my opinion.
0 Likes

Quoting: TcheyAre they real puzzles, or try and repeat puzzles ? I mean, a quick example i have in mind : a piano with 20 keys, find the correct 8 keys and in order, to open the door, is try and repeat. If there are clues to find the keys immediately if you think well, then it's real puzzles. In my opinion.

There are always clues, nothing in the game is based on guess work.
2 Likes, Who?

View PC info
I love games like this. Too bad there are so few of them.

I'm still eagerly waiting (and hoping) for Obduction on Linux, but it seems they're still focused on VR at this point.
1 Likes, Who?

metro2033fanboy 10 Apr, 2017
View PC info
Didnt like that puzzler games but I got yesterday Talos of Principle on STEAM...lets what it is about...haha

Another game in this genre on Steam for Linux is Haven Moon. http://store.steampowered.com/app/493720/
3 Likes, Who?

Quoting: rustybroomhandleAnother game in this genre on Steam for Linux is Haven Moon. http://store.steampowered.com/app/493720/

Oh nice, thanks! I don't think I've ever heard of that one before.
0 Likes

faceless 10 Apr, 2017
View PC info
I've already finished the game on Linux, and I certainly recommended it, as I really enjoyed the game. Was also expecting a review on GoL ;)
As stated in the previous post and in the article it's a pretty good puzzle game, with logical solutions in the vein of Myst with an interesting background story.
The environment is beautiful and it was a joy to spend my time in the realm of Quern. I congratulate the small development team of Zadbox, they did an amazing job.
However, I wish the game was better optimized for linux. With settings on high/medium and 720p resolution the framerates were inconsistent and sometimes low (around 20 fps), other times higher (reaching 60 fps), but certainly playable. In addition, the game crashed for me about 3 times. My specs are: linux mint 18.1, i7 3770k, nvidia gtx 670 (proprietary drivers), 16gb of ram.
Nonetheless, it is great to have such a game on Linux.
Cheers!

View PC info
Nice article (that indeed made me put the game on the wishlist).

A tiny bit too late, because it had been on 25% discount sale on GOG. Well,