First-person puzzle game Attractio has been released on Steam

By Samsai - 23 January 2016 at 2:52 pm UTC | Views: 8,899
A first-person puzzle game by the name of Attractio, developed by GameCoder Studios and published by Bandai Namco Entertainment, has been released for Linux on Steam. 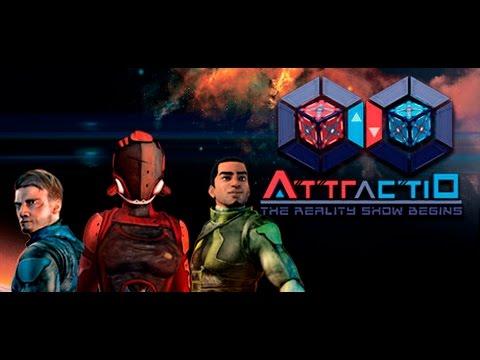 YouTube videos require cookies, you must accept their cookies to view. View cookie preferences.
Accept Cookies & Show   Direct Link
This game popped up on Steam a couple of days ago and we completely overlooked it for some reason. We do not get too many first-person puzzle games and it seems that Portal fans on Steam have eagerly jumped onto this game.

I snatched a copy from Steam when I became aware of its existence and have been testing it a little bit, though I cannot yet give you an in-depth review. However, I would like to note that the game does run quite well on my R7 370 with RadeonSI and that the voice-acting is, well, reality TV show level. Also, some folks might want to be aware of the fact that there is no FOV slider in the game and the FOV by default seems to be below 90 degrees horizontal.

About this game (from Steam):

Be the first to change gravity and solve hard deadly puzzles in Attractio! Control the 3 contestants: Dalek, Mia and Keir, who compete to win the controversial reality show. You will need dexterity and cleverness to pass throughout the challenging levels. Are you up for the challenge?

I'm a Linux gamer from Finland. I like reading, long walks on the beach, dying repeatedly in roguelikes and ripping and tearing in FPS games. I also sometimes write code and sometimes that includes hobbyist game development.
See more from me
Some you may have missed, popular articles from the last month:
The comments on this article are closed.
6 comments

View PC info
There was a graphical glitch on Nvidia Maxwell cards where you'd have small squares sometimes appear on screen, but that bug has since been fixed. It wasn't game breaking, or anything, but it was annoying, so I'm glad they fixed it quickly. The voice acting in this game is next-level cringe, but the puzzles are pretty good. The difficulty curve, for me, has been quite good, granted I've played for just under 3 hours. Hopefully some really devilish puzzles pop up later. The puzzles all revolve around gravity and manipulating it to achieve your objective.

I'm having fun with it so far. If you want to see the game in action (and hear the hilariously bad voice acting), check it out:
View video on youtube.com
1 Likes, Who?

View PC info
Oh no, another puzzle game. But at least it looks and plays like a modern game.
0 Likes

View PC info
They'd better change the name of that first character before the BBC catches wind of it, they like to sue people for using their copyrighted names & Dalek is one of their biggest moneymakers from Doctor Who.
0 Likes

View PC info
Vaguely remembering the title I started looking through all the sites I ever bought games from, and there it was. Including a Steam key. That's the good news.

The bad news is that I also found a bunch of promising games that never got completed. Many even were greenlit on Steam just to never be seen again.

Anyway, it does seem like the game got a healthy chunk of development since I saw it last. Looking forward to finally playing it.
0 Likes

View PC info
This game was released a couple years ago just not on steam. It was available in some bundles, time to go back and check for a key.
0 Likes
While you're here, please consider supporting GamingOnLinux on: