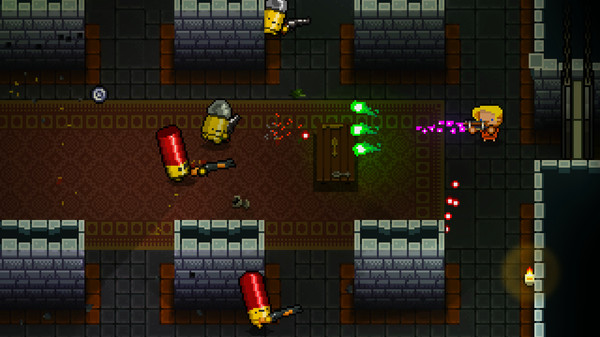 I have been excited about Enter the Gungeon for a long time, and now that it has been released with day-1 Linux support I took a look at it.

Disclaimer: Copy personally purchased, the publisher Devolver and the developer never replied to me.

The game started on the correct monitor for me as I have two, which is still quite rare. That's always a good way to start!

I've long been a fan of fast paced action shooters, and while Enter the Gungeon isn't massively different in gameplay to other shooters it is extremely fun to play. Even the tutorial was great, and it's literally hooked me in from the first moment of loading it up.

You can flip tables over for cover, kick barrels at enemies, do a roll over bullets and it just keeps getting more entertaining the more I play it. It has a bit of freedom to it too, you pick what rooms you enter and when, and you get to buy items if you manage to find a shop.

The mix of different weapons, and different characters to choose is certainly keeping the game spicy for me. Each character has a different starting weapon, and starting items or abilities. So you can pick one that suits your play style, I am becoming quite fond of the girl that starts with a revolver and a crossbow, who also has a pet following her.

Here's an example of an awesome weapon, and a fun boss. I picked up the Proton Backpack, which made easy work of this rather muscular bird-man:

The enemies of course come in all shapes and sizes, some weird, some downright annoying. There's a self-aware hand grenade that appears in certain rooms, and when it appears it makes a kamikaze run at you. They kill me quite often.

Here's another example of how delightful the bosses are in this game, I present the Bullet King, and yes that's a throne of guns:

Everything about this game has me screaming "on more run, just one more run!".

Issues
Like all day-1 releases, it does have an issue.

When you alt+tab the sound will mess up with static and other weirdness. That's the only issue I have found.

The default Steam Controller bindings are quite terrible. I've tried a community config with quite a few people subscribed to it and it does make it better to aim, but still not amazing.

It's probably one of, if not the best 2D shooter I think I've ever played.

You can get it on our Games Republic store which credits us a little, or on these other stores below.

View PC info
Looks great, and has local co-op. I'm definitely interested. On scale from "hell no" to "hell yeah" in your opinion how playable this is with a couple of drunk buddies? :)
0 Likes

View PC info
Great game. It's basically Binding of Isaac except a little bit better. Works great with a 360 controller, requires significant tweaking with a Steam Controller, and, like most twin stick shooters, ironically, works best with m&kb (at least for me).
2 Likes, Who?
burzmali 6 Apr, 2016
Well, I've noticed it has some of the same hit detection issues that Binding of Isaac has, i.e. altitude is a mess, and the dodge roll would be more fluid if it didn't get hung up on walls quite as easily. Overall though I'm enjoying it, it's not quite as tight as Isaac, but has more variety.
0 Likes

chip 6 Apr, 2016
View PC info
Great, just finished Hotline Miami 2 after year and I love these games. Since I still enjoy playing Nuclear Throne, I will pick this up later I guess.
0 Likes
While you're here, please consider supporting GamingOnLinux on: