Gabe Newell At LinuxCon 2013, Linux Is The Future Of Gaming 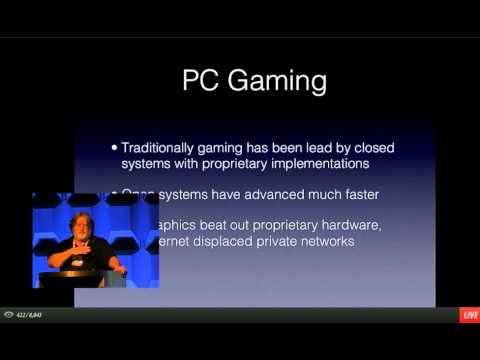 Gabe Newell ValveLinux is the future of gaming

It was great to see Gabe talk about Linux and gaming and gave some nice insight into Valve. Here are just a few points I managed to pick up on:

They haven't been happy about the way closed systems have been heading for several years, most likely pointing towards things like Windows Store, App Store etc where approval can take ages and can cost a lot money.
Gabe gave an example of an update they put out on the apple store that took 6 months to get approved.

They feel like if they can get games out like Left 4 Dead and more that it can remove issues for other big name developers by them doing the work for them (speaking to nvidia, sorting other drivers out etc).

Several Valve developers actually work on SDL itself (it was also started by a current Valve employee) so we should steadily see decent improvements to that project thanks to them.

They are co-developing a Linux debugger in addition to the work they do with LLVM. This should help a lot of developers.

They say the next step for them is to release some work they have done on the hardware side.

Next week they will give more info on bringing Linux into the living room, so it looks like a Steam Box is getting closer to being a reality. Article taken from GamingOnLinux.com.
Tags: Editorial, Steam, Video
0 Likes
Share

QuoteNext week they will give more info on bringing Linux into the living room, so it looks like a Steam Box is getting closer to being a reality.

This is the news I've been waiting a year for so it better be good. I don't think I'm alone in hoping this puts PC (and linux specifically) gaming on a par with console gaming in the eyes of developers.
0 Likes

View PC info
Just brilliant news to hear their commitment reaffirmed so clearly. Taking your word for it, cos I'll not have time to watch the video until a bit later tonight! :)
0 Likes

View PC info
2013 is really turning out to be the year of Linux.
0 Likes

Well, Sam Lantinga now works at Valve, he didn't at the time.
0 Likes
tweakedenigma 16 Sep, 2013
I am really looking forward to seeing how the Steam Box shapes up. I have no plans on buying a PS4 or Xbox One, but I would still like to have something in the living room.
0 Likes

View PC info
And about them improving lldb... Well, I'd rather they'd work on gdb, but that's just me and my GPL fetish.
0 Likes

Quoting: tweakedenigmaI am really looking forward to seeing how the Steam Box shapes up. I have no plans on buying a PS4 or Xbox One, but I would still like to have something in the living room.

I really like our setup with a MythBox to run Linux games on a TV, so I think a Steam Box has lots of promise
0 Likes

View PC info
Years ago, I spent £170 on a RevoPC and stuck XBMC Live on it (Ubuntu-based XMBC). With its built-in VDPAU acceleration, and HDMI out, this is still my main media centre box. But, since it's linux-based, it won't play with any of the Netflix plug-ins for XMBC.

I'd love to see a SteamBox if only to see Valve give the likes of Netflix and Lovefilm a reason to support linux. Playing my games on my TV would just be icing.
0 Likes

Quoting: QuoteSeveral Valve developers actually work on SDL itself (it was also started by a Valve employee)

Well, Sam Lantinga now works at Valve, he didn't at the time.

Indeed, but what I stated was still a fact, he's a Valve employee and he started it.
0 Likes

View PC info
Yes, of course, but it was a bit ambiguous :P
0 Likes
1/3»
While you're here, please consider supporting GamingOnLinux on: