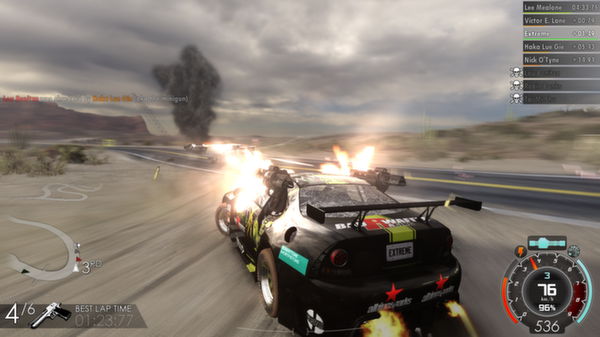 I had given up hope of seeing Gas Guzzlers Extreme on Linux, but it seems the developers have found a new porter.

On the 30th of August the developer simply said this:


QuoteWe negotiate with the new team about porting.


QuoteIt's other porting company. They reviewed the code and they said it was all ok and that they will accept porting but since we do to console ports we first have to do some tasks related to all platforms including Linux. So we don't do double work (we and other company on Linux). Lots of stuff is shared on all platforms and right now we doing major engine redesign so we can more easily support Linux. Then other company will jump in if everything is ok.

We still have some time to wait, but it's good to see they haven't just given up at getting help to bring it to us. Another high quality racing game will be fantastic to have on Linux!

About the game (Official)
Gas Guzzlers Extreme is a fast, furious, armed-to-the-teeth, trigger-happy shooter, shifted into top gear! Take a white knuckle ride in this crazily addictive combat racing game that features a ton of vehicles, weapons, upgrades, on-track bonuses and environments. Gas Guzzlers Extreme is an exciting new twist on the car combat experience with the addition of furious team/clan combat battles.

Players start out with low performance vehicles and soon work their way up to high-performance models, by earning money in a series of hi-octane races and arena battles. New game modes, tracks and vehicles are unlocked as players progress through the game. Along with developing their driving and fighting skills, players can spend their hard-fought cash, customizing their vehicle to match their clan members or pimping their ride for the road to glory! Article taken from GamingOnLinux.com.
Tags: Action, Editorial, Racing, Steam, Upcoming
0 Likes
Share

View PC info
looks good. thanks for heads up!
as I just finished dirt showndown I need another racing game anyway :}
0 Likes

Imho a very good game.
I bought it back then when a Linux port was promised (yeah, yeah) and played it quite a bit on Windows.
0 Likes

View PC info
*puts back in the wishlist*
0 Likes

View PC info
Reminds me Asphalt 8 on Android + weapons. Will buy it once it will be released :)
0 Likes

Shutup-Fool 1 Sep, 2015
View PC info
Still waiting on GRID Autosport, but it'll be nice to have some good racing titles on Linux.
0 Likes

View PC info
Do we know who the porter is?
0 Likes

Quoting: pete910Do we know who the porter is?

From the link we know at least that it's NOT Virtual Programming, Aspyr or Feral.
0 Likes

View PC info
Good news, I quite like t his game. Works well with my G27 in Windows.
0 Likes

View PC info
Wanted to buy in the past but refused to because no Linux. Can't wait to buy in the near future. Hopefully their porting process goes well. May the schwartz be with you GG.


Last edited by ElectricPrism on 2 September 2015 at 1:59 am UTC
0 Likes
metcard 2 Sep, 2015
I have been wanting and waiting for this game for so long.
I suggested knockout games (shadow warrior redux) a while ago when the project was abandoned, so maybe he's porting it.
0 Likes
1/2»
While you're here, please consider supporting GamingOnLinux on: