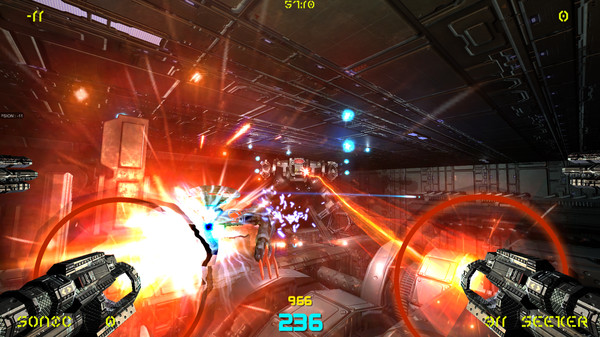 Geocore [Steam], an Early Access six degrees of freedom shooter has Linux support and it was recently updated to include Vulkan too. Before getting excited, keep in mind this it's £1.99, so don't expect much from it.

It's actually using Unity, so it's not surprising they were able to build it with Vulkan. I've tested it briefly and it seems the Vulkan version does work on Linux, although the game is locked to a max of 60FPS so you can't tell easily if the performance is any better.

It has the same fullscreen bug as Rust, where you get no input so you have to load it up in Windowed mode. I assume this is a Unity engine bug, since multiple titles have it. If you make it fullscreen once it's loaded, it then works fine.

I tested it out, but it's incredibly rough. It doesn't really have any players online, but it could be one to keep an eye on. If they build out the single-player mode it could be a reasonable six degrees of freedom shooter in future. Going by their updates on Steam, they do seem to be working on a proper single-player mode for it.

For now, in my opinion it's not worth picking up as there's just nothing to it. Article taken from GamingOnLinux.com.
Tags: Early Access, Action, Steam, Unity | Apps: Geocore
8 Likes, Who?
We do often include affiliate links to earn us some pennies. We are currently affiliated with GOG, Humble Store and Paradox Interactive. See more here.
About the author - Liam Dawe

I am the owner of GamingOnLinux. After discovering Linux back in the days of Mandrake in 2003, I constantly came back to check on the progress of Linux until Ubuntu appeared on the scene and it helped me to really love it. You can reach me easily by emailing GamingOnLinux directly.
See more from me
Some you may have missed, popular articles from the last month:
The comments on this article are closed.
4 comments
rustybroomhandle 11 Jul, 2017

QuoteIt has the same fullscreen bug as Rust, where you get no input so you have to load it up in Windowed mode. I assume this is a Unity engine bug, since multiple titles have it. If you make it fullscreen once it's loaded, it then works fine.

This is indeed a Unity bug. My games are mostly mouse-driven so it's a bit annoying. I think it might be fixed in Unity 2017.2b2 but I'm still on 5.6.2 so I use a somewhat janky and not 100% reliable workaround.
0 Likes

Quoting: rustybroomhandleI think it might be fixed in Unity 2017.2b2

View PC info
Vulkan support on Linux, I had to buy it :-)
0 Likes

View PC info
I added -force-vulkan to the start options of the game in Steam, it runs in window mode but it is incredible slow and the keyboard and mouse navigation works only partially.
0 Likes
While you're here, please consider supporting GamingOnLinux on: