Thanks to the magic of DOSBox, Earthworm Jim 1 & 2 are now available for Linux direct from game store GOG. They come as part of a bundle "Earthworm Jim 1+2: The Whole Can 'O Worms". 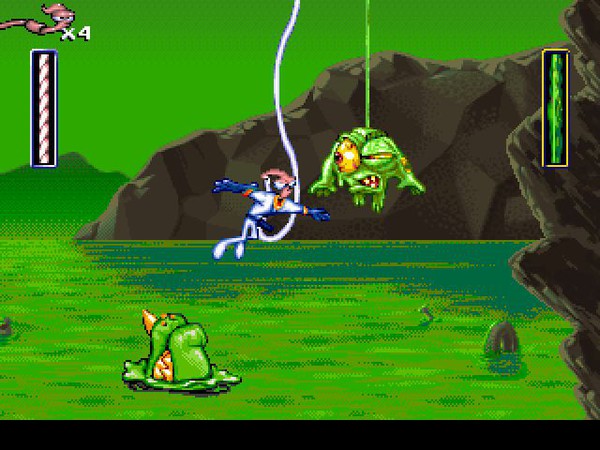 As usual, our friendly GOG contacts sent over a copy for me to test out. They come as seperate downloads, but each has the GOG installer powered by MojoSetup. Naturally, they come with DOSBox pre-configured so playing these classics is easy on Linux.

I actually played the original on the Sega Megadrive at a friends house when I was younger, I remember being mesmerised by it at the time. This sure brought back some memories! For those that never played it, it's a run and gun action platformer that was originally released in 1994, with the sequel releasing in 1995.

After testing both, I couldn't find any issues. They worked perfectly, super smooth as expected from a classic title.

I still love the fact that GOG keep classic games alive like this, it's vitally important we don't lose access to some true classics.

Eike 23 Nov, 2017
View PC info
How did it feel to play them? I found most games you remember from youth are better kept in shining memories than actually replayed...
2 Likes, Who?

View PC info
There are *SO* many games there that I wish they´d do the same for, if even for no other reason than improving the statistics of available "linux-titles".

I was just considering buying the "Wing Commander-bundle" (WC 1-5, WC: Privateer, WC: Armada) yesterday, a bunch of games that I know for the most part works great with dosbox but the fact that it was only flagged as windows games, irked me so much that I abstained.

I mean tecnically they are *NOT* windows games anymore, I doubt you could get most of them to function well under win 7,8 or 10 these days. Today they are dosbox games plain and simple, availble for whatever systems that can use the program.

Quoting: EikeHow did it feel to play them? I found most games you remember from youth are better kept in shining memories than actually replayed...

Most games i've played in my youth hold up better than most AAA that come out nowadays. So much so that i still play them to this day.

Tie Fighter (1995) is an awesome flight sim, and so far no recent flight sim can compete with this one.

Very true! I remember it took 2 Gravis joysticks when i was playing X-Wing through.. A very hard game but did it. Don't know if the bestest of Tie Fighter versions is available for Linux, still.
0 Likes

View PC info
Earthworm Jim 1&2 are one of my best memories of game of Sega Genesis / Megadrive, along with Lost Vikings. I never found any game close to Lost Vikings gameplay until today, by the way.


Quoting: TcheyI never found any game close to Lost Vikings gameplay until today, by the way.


I heard The Cave is similar to this. Trine may remind The Lost Vikings too.
0 Likes

Quoting: ageresI heard The Cave is similar to this. Trine may remind The Lost Vikings too.

The Cave yes actually, it's the closest i know about, but still taste something else.

Trine, nah, not even close.
0 Likes

pb 23 Nov, 2017
Could your friendly GOG contacts tell us when they plan to release Galaxy client for Linux? I have hundreds of games on GOG (Earthworm Jims included) and it's a real hassle to manage them, and that's ignoring all the extra content that comes with them (soundtracks, manuals, codewheels etc.).

View PC info
Yes Ill buy it. Especially if it goes to steam.

All it has to do is work well and be easy to install and play.

There are many old titles I would buy dosbox or winewraps of. But the rule of thumb is that if its post 2008 I will only buy native because wine wraps of this category are too unstable -- native or nothing.

I was looking at the atari collection on linux on fanatical yesterdy, theres so many retro collections to buy. I love it.
0 Likes

Quoting: ageresLinux and Mac versions on GOG and Windows only on Steam? That's very unusual.


Not really. It's a common case for DOSbox games that GOG package for Linux. Steam mostly don't bother to do it.