Going where no Steam Play has gone before with Elite Dangerous

What’s the one game keeping you a dual booter? Maybe it’s PUBG, or Rainbow Six: Siege? Maybe it used to be Overwatch? For me, that game was Elite Dangerous, and one year on from Proton’s release, I have a story to tell.

There’s a certain “je ne sais quoi” about Elite Dangerous that I’ve never been able to put my finger on. It’s a game set in a scientifically modelled, full-scale replica of the whole Milky Way galaxy, and as with that setting, the game is truly vast, remarkably cold, and frequently incomprehensible. Yet, when playing Elite, I get the same feeling as when looking up at the stars on a dark and moonless night — my hungry soul is fed. Or it could just be space madness. Regardless, it’s a feeling that I like to dip into every once in a while, immerse myself in, and try not to drown.

Back in February of 2018 I signed up for Distant Worlds 2, an expedition to cross the whole of our galaxy and meet up with thousands of others on the other side, at a star system known colloquially as Beagle Point. The system is named as a memorial to the late dog of the first commander to reach it, but is also a location that holds a special place in many other Elite Dangerous players hearts, partially because it’s very much no mean feat to reach it, but also because in one direction it offers a jaw dropping view of our galaxy, and in the other, the sheer black and empty abyss of what lies beyond. In a game so frequently set to a backdrop similar to a mottled night sky, those views, and the immense pilgrimage taken to get there, act as an unparalleled reminder of the scale of the universe and our place in it. It’s the kind of experience that stands proud as the best of what video-games have to offer. I’d never been out that far before, and it would take months to get there, but I just couldn’t pass up that kind of opportunity.

There was one problem though. Elite Dangerous doesn’t have a Linux version, and still had significant issues with Wine. I’ve never been a “No Tux No Bux” kind of person, so I’d been playing the game on Xbox One first, and then on my Windows install, but this was slowly becoming the last game I needed that partition for. Even as a “dirty dual booter” I cringed at the thought of effectively changing my daily driver for a few months, but the expedition was also setting off in 2019, so I’d have to keep my gaming Windows setup alive and well at the very least for another year and a half. I wasn’t too happy with that prospect, but it was the hand I had chosen to reluctantly deal myself.

In summer, while preparing my ship for the trials ahead, Proton was launched and a ray of hope was lit. By winter, Elite was playable, but with lingering issues, and it still required a custom build with various patches and hacks. In testing, it still crashed or disconnected frequently for me, and had painful performance dips when on planets. It wasn’t enough, and I accepted my fate.

On January 13th we set off. I flew on Windows. The game servers crashed from the sheer thousands of spaceships all hyperspace jumping synchronously into the black. At least those crashed servers were probably on Linux.

I arrived at Beagle Point late after almost 5 months out there, on the 8th of May, and it was everything I’d hoped — a humbling journey and a pensive rest at the edge of our galaxy. I met with some folks on the surface of a world as far from home as we could imagine, and recounted tales of near deaths, earth-like worlds and black hole sunsets. Meanwhile, on the way, something amazing happened. Those custom patches had made their way into mainline Proton, DXVK had improved, and suddenly, with one small tweak (installing dotnet40, needed for the launcher), I could fly my ship on Linux.

Not only that, but the issues I’d always had with the drivers for my HOTAS, a Saitek x52 Pro, were all gone, including installers that aren’t even fully compatible with Windows 10, default clutch modes that just don’t go away, and weird bugs picking up some buttons as a 2nd mouse. On Linux, a perfectly usable driver for the joystick and throttle is right there in the kernel! The game fully picked up my Ultra-Wide monitor, when on Windows the OS would fight and move my other windows around failing to compensate. “ED Market Connector”, an external app I use for journey tracking, trade data sharing, and more, has a fully working Linux version. Lastly, and this blows my mind, it all works in VR — Sheer magic. 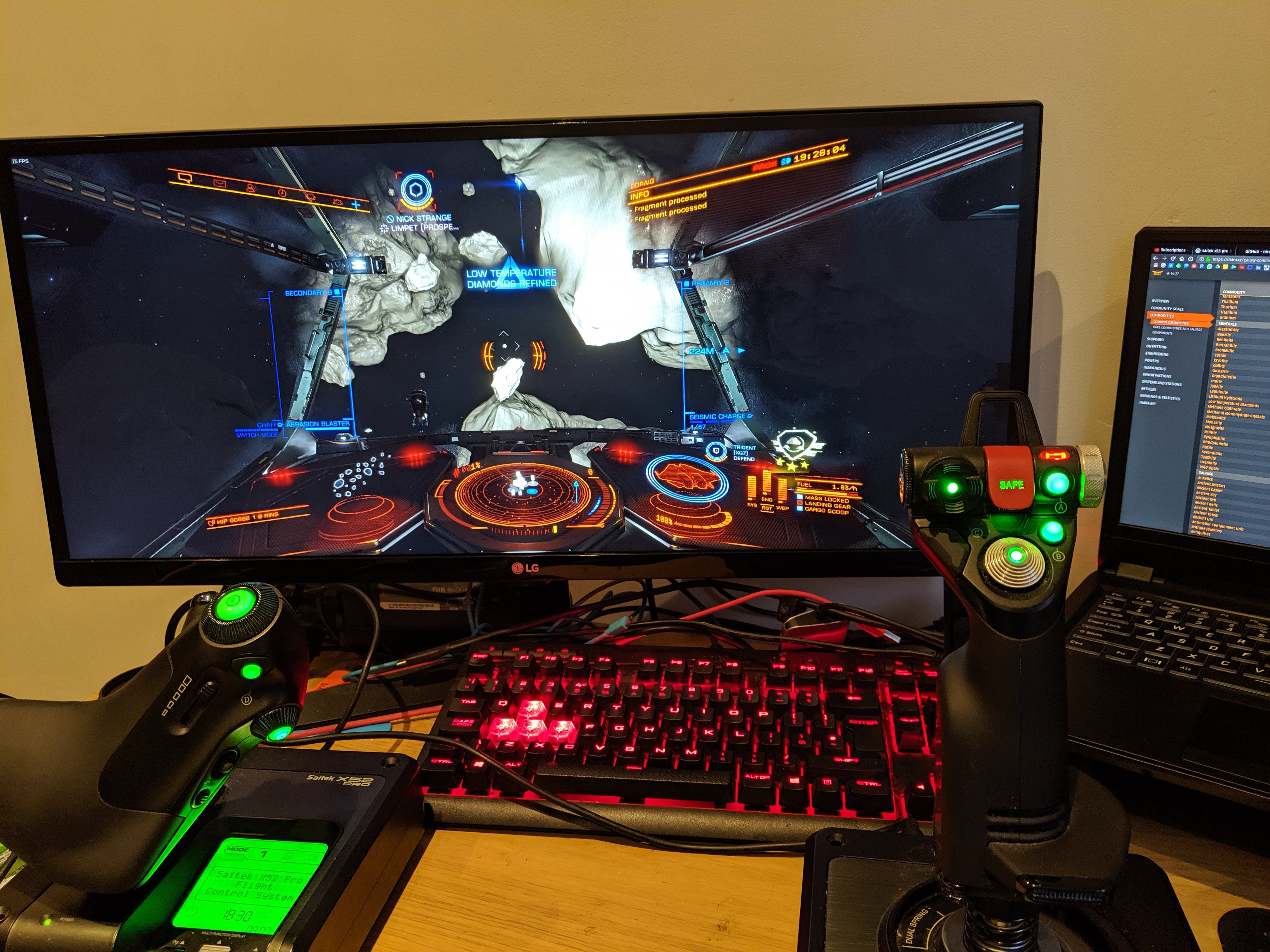 I made my way back to Sol on Linux, faster this time, enjoying every minute of an experience I’d wanted for years. I docked my limping but mostly intact Beluga cruise liner at a starport in the tiny human occupied bubble of space two months later on the 29th of July. I felt like I’d achieved something, and most importantly I’d been able to finally do it on home turf. I set off on Windows, but I came back changed, and these days, my Windows install is kept around almost entirely for work.

I wouldn’t claim that it’s a game for everyone, but there are a huge number of us who enjoy it’s take on the space genre. The fantastic blend of difficulty, control, subtlety, agency, scale, individuality and community all make Elite Dangerous a powerful experience. Those factors all make Linux great too, it’s impossible not to see the clear parallels. They’re both difficult at first, but a joy once you get going, full of wonderful nerds with their own stories and reasons to be, sharing their customisations, doing the hard stuff for its own sake, and creating something much greater than the sum of its parts. A year after Proton released, it’s a match made in the stars.

If you do see me out there in the black, don’t be afraid to say hi and share your stories too. Maybe we can start a squadron of penguin commanders.

You can pick up Elite Dangerous on Steam.

Article taken from GamingOnLinux.com.
Tags: Steam Play, Editorial, Steam
55 Likes, Who?
We do often include affiliate links to earn us some pennies. We are currently affiliated with GOG, Humble Store and Paradox Interactive. See more here.
About the author - Marc Di Luzio

I’m a programmer and avid gamer. I currently develop and game on Pop_OS, plus run Mint, Fedora and Raspbian at home. I work at Unity as a Linux specialist in the Sustained Engineering team, while also contracting for Valve. Formerly developer and Linux Group Lead at Feral. Any opinions and thoughts I write are mine personally and do not represent those of my employers.
See more from me
Some you may have missed, popular articles from the last month:
The comments on this article are closed.
54 comments
Page: 1/6»

View PC info
What a great article, thanks! Looks like there's no excuse left not to get that trusty old Cobra Mk III back into service. :)
6 Likes, Who?
Scattershot 20 Aug, 2019
Very cool. ED was that dual boot reason for me too, although I went the other way and ditched ED as the constant OS switching was a pain.

Time to give it another go no that it works in Wine.
2 Likes, Who?

View PC info
Perhaps it's time to install ED again; havent played on PC since I went Linux only. I do have it for my PS4 though.
1 Likes, Who?

Rooster 20 Aug, 2019
View PC info
I love Elite. I played it when on PS4 (before I sold it) and it was an amazing experience. One big minus for me is the insane amount of grind needed to get a good (not great ship) to do exploration. That was what made me stop playing it in the end.

But I would still definitely recommend it to all space sim fans. The precision of ship flying controls in Elite is unmatched. And I didn't even play it with Hotas, just with good old PS4 controller.

View PC info
Have not tried ED yet, since it seemed to be finicky to get it to work natively, but I bought it a while back. Time to try it soon then!

The thing that keeps me dual-booting is Easy Anti-Cheat. Keeping my fingers crossed for wine support within the next year.
1 Likes, Who?

Quotewe can start a squadron of penguin commanders.

View PC info
Thanks for a great read, Marc! So it works in VR too? Fantastic.

View PC info
I bought ED a long time ago, at a time when I was still a flight sim enthusiast (DCS, F4 BMS, MS:FS etc.) and had a full flight sim setup with HOTAS, pedals and TrackIR. My interest in flight sims started dwindling and eventually I sold all my hardware and shortly after I ditched Windows too. I never got to play much of ED before that, but now that it works in Proton I might give it another go. How well does it work with an Xbone-controller or mouse and keyboard? Is it still worth getting into even without all that HOTAS gear?
1 Likes, Who?
ironhead 20 Aug, 2019
Very nice. Does ED now work out of the box with Proton? The last time I tried I needed a custom patched Proton version.

I don't have Windows anymore and I'm really curious if ED will work with acceptable performance when the Valve Index finally arrives :)
1 Likes, Who?

Quoting: BrisseHow well does it work with an Xbone-controller or mouse and keyboard? Is it still worth getting into even without all that HOTAS gear?

It works brilliantly well with a 360 controller and the settings option is actually labelled for XBone, so it should be fine. Remember there are console ports, so the controller bindings are designed to do everything. I started playing (a couple of months ago) with my 360 controller just because it happened to be plugged in at the time, but I'm at the point now where it would feel weird with anything else.

Quoting: ironheadVery nice. Does ED now work out of the box with Proton? The last time I tried I needed a custom patched Proton version.

More or less. As Marc says, you still have to install dotnet40 with winetricks/protontricks, but it doesn't need a patched Proton any more. I found setting up an account to be a bit of a pain (I had to reboot before it would accept that I had done so), but if you already have one that shouldn't be a problem.

By the way, I've mentioned my framerate issues a couple of times. Rather than resurrecting old threads, I'll take this opportunity to say that the suggestion someone made of turning down the shadow detail seems to have worked. I haven't had much chance to play it recently so I can't say it's eliminated the problem completely, but it's definitely an improvement (and it doesn't look as bad as I expected; I can hardly tell the difference :) ).
3 Likes, Who?
1/6»
While you're here, please consider supporting GamingOnLinux on: