Ever thought about recording your thoughts and memories into a computer to relive the happiest moments of your life again and again and again? Well, here we have a game in which we can explore what might happen if such technology was available to us. Let's go see what Soul Axiom has in store for us!

Soul Axiom, developed by Wales Interactive, is a first-person puzzle game currently in Early Access in which you travel through a virtual world called Elysia. Elysia was created to be a ”digital afterlife” in which you could store you ”soul” along with a couple of memories and live the happiest days of your life for an eternity. However, not all is as it seems and you must unravel the mysteries surrounding this ”heaven” of zeros and ones. 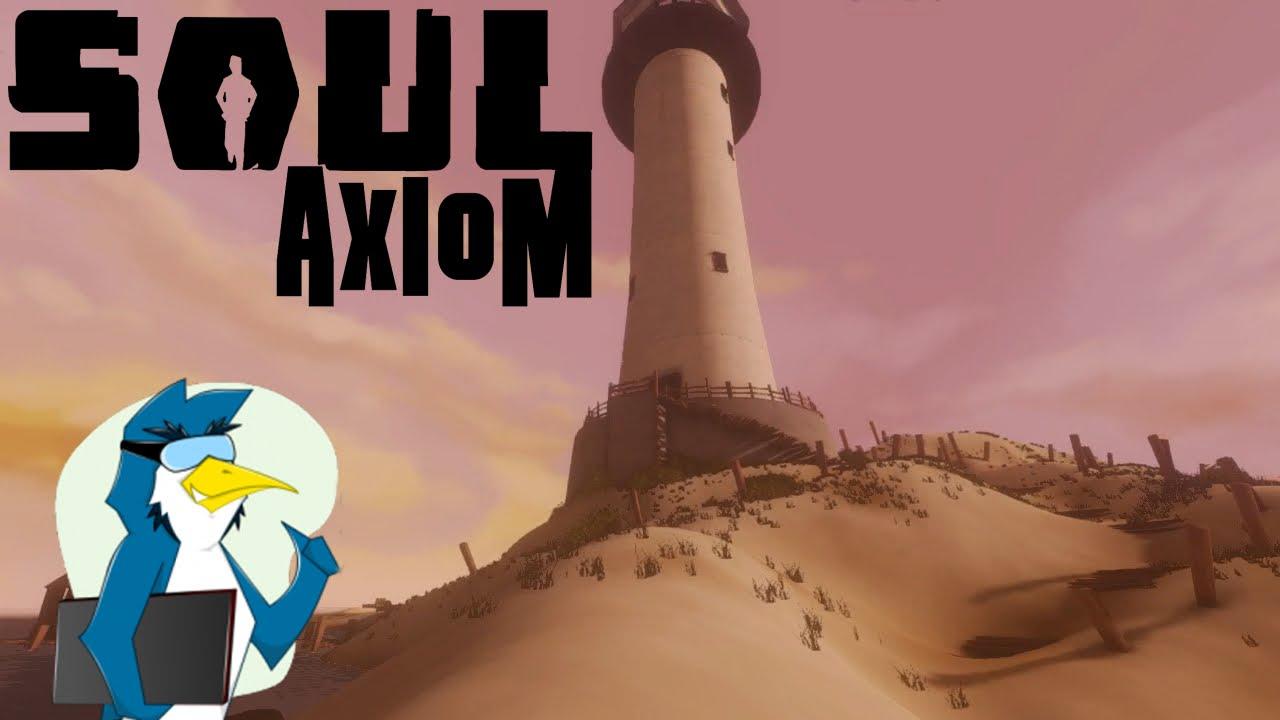 The game starts out with you falling through a storm and landing on a ship that is seemingly floating in air. No real explanations, no lengthy intro cinematics, nothing. You are thrown right into the thick of it without even a simple objective. You are left to figure out clues about the world you are in and to solve the puzzles these worlds present to you in order for you to advance into the next area.

But don't worry, the story isn't completely nonexistent. In fact, it's a quite thrilling one. Most of the narrative is told in the form of various “log entries” you'll find scattered throughout the levels. Some of these logs are emails from the people working on the Elysia project, some are news articles that either are related to Elysia or its inhabitants. There are also some cinematics, but really only one per each main level you've completed and so far each of those cinematics has been there just to make sure you understand what the meaning and theme of that level was. The game mainly just encourages exploring the levels and discovering the story that ties the whole world together on your own, but doesn't require it.

And indeed, the theme's between each level vary a lot. The first bit of the game is mainly just a tutorial to teach you the basics but after that the game really gets interesting. Each of the main levels is basically a memory of someone who decided to sync their soul into Elysia. Thus the levels can vary in style and architecture a ton. One of the levels is in a jungle, another is in a warzone and one of them is basically an exhibition or a museum. But even though the levels change in style, they still don't feel inconsistent. They are actually pretty well designed and still adhere to the overall art style of the game.

Now, let's talk a bit about the gameplay. When you are making a puzzle game you probably want to build your game on a certain mechanic and then apply that to create various puzzles. In Soul Axiom the mechanic are the various skills you acquire through the game. The first power you get is the Phase power, which allows you to phase certain objects in and out. This makes it possible for you to remove objects that are blocking your way or create bridges, stairs etc. out of thin air. Naturally that alone wouldn't make for a all that interesting game, so the game quite quickly introduces another power, which is something called the Play power. Play power allows you to manipulate certain objects to turn them and move them around. You can't move objects around freely though, they are tied to invisible rails and you can only move them around on those rails.

The third power, which is also the last one available, is the Destroy power which allows you to throw fireballs around to destroy certain objects. There is no combat as far as I know and this power is used only as a tool to solve puzzles. And because this power was only implemented recently not a whole lot of puzzles actually use it at the moment.

The puzzles in the levels vary in difficulty and in style but often you need to use your powers to complete them. In some cases the puzzles might simply require you to find and operate a certain device or to find all objects in a room and move them from point A to point B. But some of them get really clever and actually require you to really think. Some of the best examples are the puzzles that require you to spot certain clues in the environment and solve the problem using them.
I already praised the level design and theming and now it's time talk about the audio-visual experience. Soul Axiom is a very beautiful game. Of course it's not the most realistic game ever and the model and texture quality is not AAA quality but the art style, which is the main focus for me in games, is consistent and quite gorgeous. Each level is also accompanied by an atmospheric soundtrack that really helps set the mood for the level. The audio-visual stuff is also well polished and nothing seemed like it was placeholder material or of inconsistent quality.

But, as is often the case with Early Access, there is a small catch with Soul Axiom right now. While the game is overall well-polished all the way from the beginning to the end of the second of the six chapters, that's really all there is to it. The first level of the third chapter was released recently but the rest of the levels are simply not done. This means that what you get right now is a 4-hour experience, which is less than half of the full product. The game also uses Unity3D which, while not a bad engine, does seem to have problems with mouse control on certain computers. The game works mostly flawlessly on my desktop but on my laptop the game keeps looking up and freezing. So a word of warning to those of you who have experienced mouse bugs with Unity games recently. The first level of the third chapter also seems to have a bug that prevents you from completing a puzzle.

Correction: the developers contacted us and told us that there actually is no game breaking bug on the level in question. I was actually just missing an object that would allow me to complete the puzzle.

Overall the game has impressed me with it's narrative and visual style and the gameplay and levels have been well thought out, but the game is quite short and expensive as it is and thus I can't fully recommend it yet. But if you are okay with getting a small taste of the game and waiting for the rest of it to be completed over time then go pick it up. I've enjoyed all of it so far and I can't wait for the rest of the game to be released. I think the game will definitely be a treat once it gets out of Early Access.

Article taken from GamingOnLinux.com.
Tags: Early Access, FPS, GOL Cast, Puzzle, Review
0 Likes
We do often include affiliate links to earn us some pennies. We are currently affiliated with GOG, Humble Store and Paradox Interactive. See more information here.
About the author - Samsai

I'm a Linux gamer from Finland. I like reading, long walks on the beach, dying repeatedly in roguelikes and ripping and tearing in FPS games. I also sometimes write code and sometimes that includes hobbyist game development.
See more from me
The comments on this article are closed.
3 comments

View PC info
I've been itching to check this game out for a while. Will probably wait until there's more content in it though.
1 Likes, Who?

"the game keeps looking up and freezing" being the most important information in the article, as of course there is no demo available to check if it’s working before buying.*

* And from experience with other Unity games it will probably never be fixed.
0 Likes