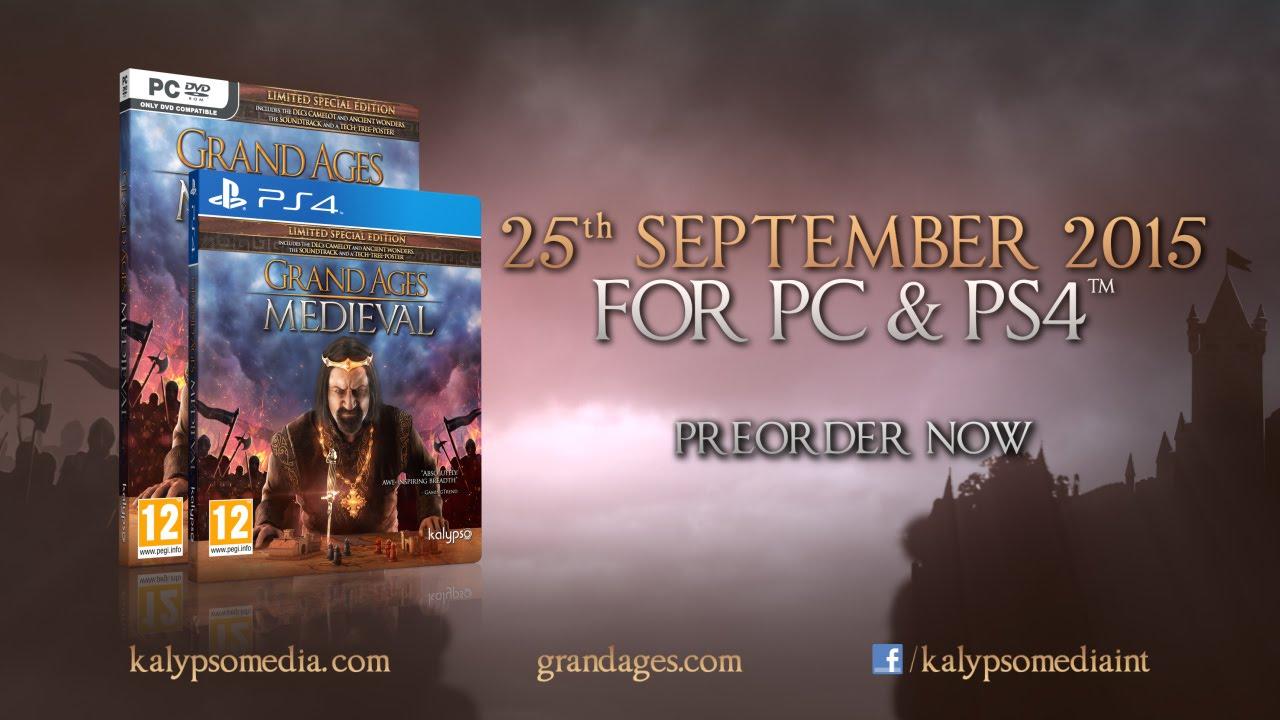 About the game (Official)
Grand Ages: Medieval is a real-time strategy game from Gaming Minds. Lead your people and advance through the decades by utilising construction, research, expansion and conquest in an area extending from Scandinavia and North Africa; to Portugal, the Caucasus and the Middle East. Rise from the humble role of a simple mayor governing a small settlement and rule over all of Europe. Experience an exciting campaign with elaborately designed cut-scenes, play by your own rules in free play or test your skills in multiplayer against up to 8 players!

My thoughts
This might very well be a strategy game that I can get into, it seems to share features from games like Civilization and other more in-depth strategy games, but it hasn’t overwhelmed me like Crusader Kings did. It does have a certain learning curve to it, so be prepare to spend some time doing the campaign before you go messing about in the open-world game.

Performance wise, I don’t have any issues with it running it on High and everything has so far worked as expected.

I simply love being able to zoom right in and see what my villagers are doing, and the graphics aren’t too bad either. Seeing them gathering crops and going about their business is quite a nice touch. I hope they expand on that aspect of it some more, as it is a little limited, but still great to see.

One thing that is annoying is the trade interface in towns, it can be more than a little twitchy and inaccurate. It’s a pain to select an exact amount of a certain commodity to go off and sell. That is one area that really needs a bit of love, an area to enter the exact amount you want would be much nicer than the slider. Apart from that, the trading system was surprisingly easy to use, and setting up an automatic route is an absolute cinch, so it’s pretty easy to get some good trade going to secure some finances.

You can earn more money by manually trading, this involves buying something like wood where plenty is produced, and simply selling it in a town that is in need, it’s a bit of micromanagement, but not too annoying.

Combat is weird, as it’s all automatic, but you can zoom in to see them going at it. It’s a bit odd because I expected to have more control over my combat units, so I’m not entirely sure if I like that aspect of the game just yet.

Another minor annoyance, Alt+Tab doesn’t work for me on Unity, as TAB is used by the game. I need to bring up the Steam Overlay to be able to do it. Minor, but still annoying.

The graphics options are also very limited. You only get one option to change, so I hope they work on that too.

Note: I’ve played well over an hour, but the game is rather big and I’m barely scratching the surface. I will probably give it another shout out once I've put more time into the various systems it offers.

Final thoughts: It’s an interesting entry, and one I will continue to play for a while to get a real feel for it, but I am quite liking what I’ve played of it so far. It runs great too, and I imagine a fair few of you strategy buffs will like it, especially if I am and I’m not usually into this type of strategy game!

We certainly aren't short on grand strategy games now. Article taken from GamingOnLinux.com.
Tags: Editorial, Initial Thoughts, Steam, Strategy
0 Likes
We do often include affiliate links to earn us some pennies. We are currently affiliated with GOG and Humble Store. See more here.
About the author - Liam Dawe

STiAT 25 Sep, 2015
View PC info
Interesting that you didn't see issues with trading. I did a lot. Especially automatic trade didn't seem to make profit, it seems to be like micro-management to me, choosing the best profit at the time, which I seem to do better without calculating it than the algorithm behind it. The trade routes are most likely a loss to me except if I micro manage them. And there is a slider for the amount ;-) ... just the usage of it is .. pretty strange.

I tend to go bankrupt in this game, for a reason I don't know yet. I have heavy over production (even in campaign), don't get rid of my goods, and can't build my 2nd city due to not getting building materials there which I have on stock in the main city, even with a cart driving just between those two cities. I even burned the ~100k you get by visiting the adventure sites with your scouts within 30 minutes. Setting up two complete trade routes between northern cities and my main city, and southern countries and my 2nd city + my main city even gives me more loss. But I didn't cope too much with my own economy, I expected to get enough income by trade, which is probably wrong.

Though, still enjoy the game, may have to figure out some points. Mainly, I enjoy the great port they did for now, the rest will come in time. Hints are welcome :D.

Segata Sanshiro 25 Sep, 2015
View PC info
Bought this today but since I'm in the middle of moving house, won't have time to play it for another week maybe :(. Looks sooo good though, can't wait!
0 Likes

View PC info
And again a game from Kalypso ported to Linux also not available as DRM-free build on GOG. What a shame after Dungeons 2! :(
0 Likes

Mountain Man 25 Sep, 2015
View PC info
Regarding ALT-tabbing, I use Kubuntu which allows you to set-up mulitple virtual desktops. If ALT-TAB doesn't work or causes problems, I can always press CTRL-Fx where x is the number of the desktop I want to access. It doesn't seem to have the ALT-TAB wonkiness that sometimes happens.
0 Likes

View PC info
Been waiting for this one, installed it, and ran it and... instant crash after flashing some boxes on the screen. I'm assuming others have had better luck?

Anyone else seeing this? Granted I'm running this with optirun on my Zenbook UX501 with Arch Linux, so it could very well be my setup. I wanted to see the performance on a 4k screen with the semi-decent GTX 960M in this machine.
0 Likes
mao_dze_dun 26 Sep, 2015
I chuckled a bit when you said Crusader Kings II overwhelmed you. I used to think the same thing. Having finally finished a full playthrough of EUIV last night, I'm actually thinking - CKII was kind of simplistic :D
1 Likes, Who?

View PC info
Ha, I still need to sit down and learn CK II. I just have so many other games to play. Maybe I'm not terribly far into SOMA yet, but besides a few little jump scares, I haven't been horrified in the same way I was with Penumbra.
0 Likes

Quoting: maodzedunI chuckled a bit when you said Crusader Kings II overwhelmed you. I used to think the same thing. Having finally finished a full playthrough of EUIV last night, I'm actually thinking - CKII was kind of simplistic :D

It all depends on how many expansions you have as well, but EU4 is more complicated IMO.
0 Likes
1/2»
While you're here, please consider supporting GamingOnLinux on: