By Liam Dawe - 10 December 2015 at 4:51 pm UTC | Views: 40,904
GRID Autosport is now available natively on SteamOS and Linux. We finally have a more realistic racing game thanks to Feral Interactive.

Linux gameplay video - 1080p, Ultra graphics preset. Don’t ever let me drive a real car! I am as surprised as you that I was able to scrape 3rd place in this one. 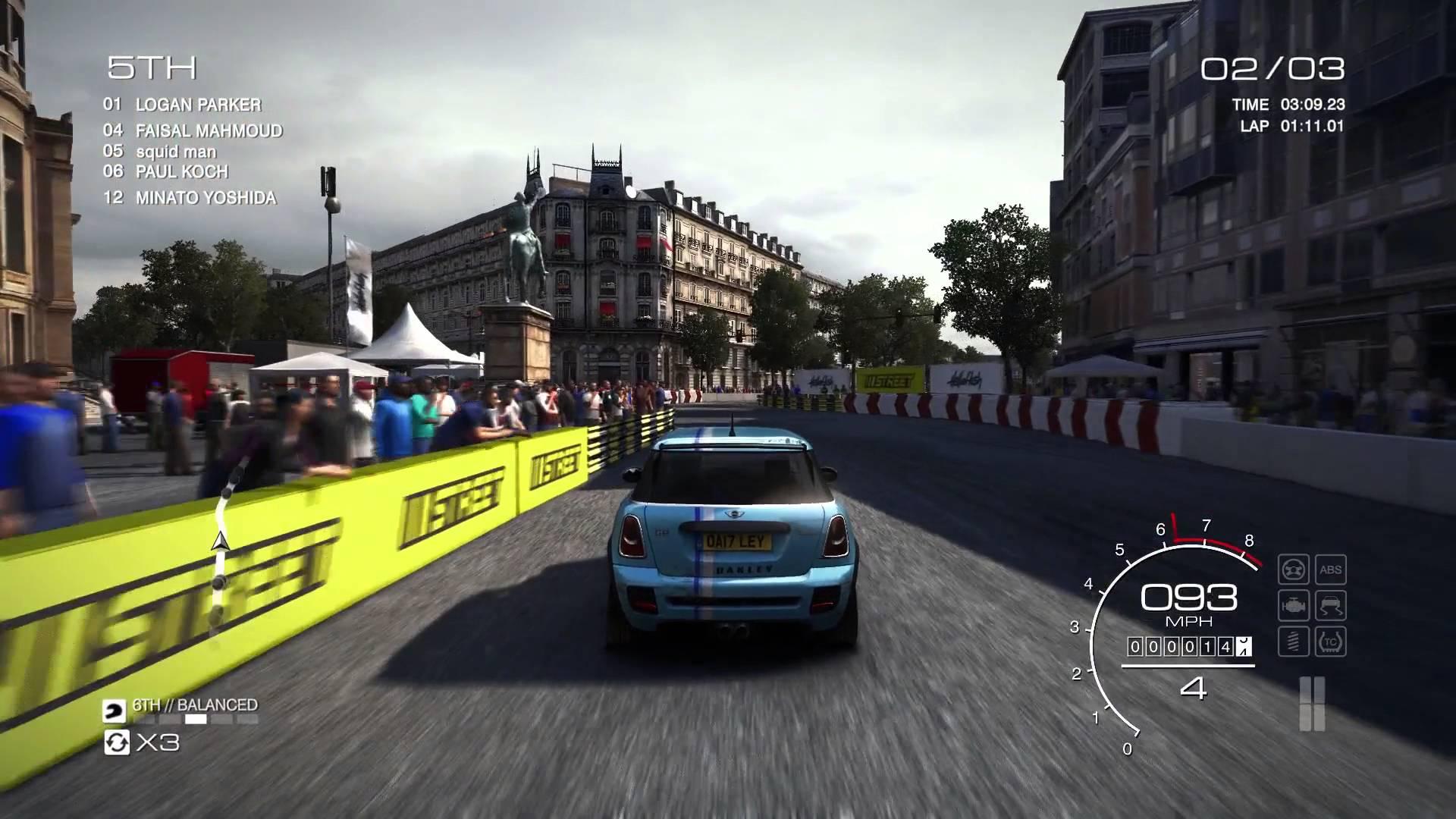 YouTube videos require cookies, you must accept their cookies to view. View cookie preferences.
Accept Cookies & Show   Direct Link
I am playing it with many driving assists turned off, as it makes it more fun. I’ve been driving without Stability Control, Cornering Assist, Racing Line and Steering Assist. They each give you 2% more XP for turning them off too, handy.

Port report
Like all of Feral Interactive ports, it won’t perform at Windows level performance, but it is a very smooth port. I have been able to play it for extended periods on Ultra settings without a stutter that I can detect. That’s probably the most important thing, that you have a good experience, and not what your FPS counter actually says (stop staring at it!).

It doesn’t support AMD or Intel again sadly, so it may work, it may not. Feral Interactive are unable to support those chips currently, so buy it at your own peril.

I do like the fact that in desktop mode I get a launcher I can change settings with, but on SteamOS or Big Picture mode with Steam it boots directly into the game. It’s nice that games can cater to different uses like this one can.

I haven’t personally been able to test them, but GRID Autosport does support pad and wheels for the authentic driving feel. That’s pretty damn awesome to be able to do it on Linux, and I’m looking at investing in some to try it for fun. Although they are mighty expensive, so it won’t be a purchase soon.

Benchmarks
It should be noted, as always, that benchmarks are stress-tests, and real-world performance is generally better. The track used in the benchmark is pretty heavy in general.

> SteamOS, AMD FX-8320 + Nvidia 560ti (graphics card that is below their minimum requirements). I did two extra tests here on 720p to see if it made a difference.

1080p, On Ultra preset, with advanced lighting on, soft AO on, global illumination and 8XMSAA:
Unplayable, obviously. Even the main menu took a long time to respond.

1080p, On High with 4xMSAA:
Average: 15 FPS
Max: 20 FPS
Min: 12 FPS
It was barely playable, without even looking at an FPS counter you could see it was terribly sluggish.

This should give you an idea of the power needed. The Nvidia 970 performs fine in all cases, and a rather old Nvidia 560ti paired with an AMD processor can work with Medium settings, not a bad port really.

I am looking forward to seeing Samsai’s performance report on his AMD 370. It will certainly be interesting to see his results, as he now mainly uses the open source driver.

Thoughts
If you played DiRT Showdown, be prepared to unlearn it. GRID Autosport is a very different beast, and it won’t let you just power around corners like you can in DiRT. It took me quite a while to actually get to grips with how different a racer this game is.

I actually own the original GRID, and I really quite liked it and missed the experience quite a lot now being a full Linux gamer. It’s another reason why I am so very happy it’s here.

The game is nothing close to as arcade as DiRT Showdown is, and while GRID Autosport isn’t exactly a full simulator it’s a lot closer than we have ever been to having one before.

What I really like about the game, is the ability to choose teams for each event. Each team will give you different targets, which will enable you to get varying levels of experience in each racing category. I find I become more immersed in the racing world having these targets, and I think it’s a really great thing to have other than just trying to always be number one.

The main thing about the game is careful braking, this is what I’ve found to be the hardest thing to get to grips with, especially as I don’t drive in “real life”. Not only that, but each racing category has a completely different set of cars and they handle differently. Getting to grips with that will take quite some time.

I have to say, that on Medium difficulty settings I am finding the AI drivers to be quite good. I actually struggled for quite a while to get even close to first place, and I still struggle at times now. This is a reason why I am liking it, as it’s actually a little challenging to keep me interested in playing more and getting better at it.
One bit of wisdom I will impart on you is this: practice. Knowing the racecourse is obviously going to give you an edge when you come to the actual race. Each race gives you the option to practice too, so just do it.

One game mode I am having particular difficulty with is the Endurance mode, where you have a countdown timer to race as long as you can. The added difficulty here is keeping your tyres in check, you only have one set and they can wear down pretty quickly. These events genuinely tire me out, and I’m not sure I enjoy them all that much. It’s a weird event too, as you have no form of pit-stop to change tyres, so it’s one set or you’re out. I do enjoy it though, as seeing an AI car speed around a corner a little bit too hard and spin-out, that’s just incredible to see, but frustrating if you’re too close—smash, you’re now driving with a half broken car.

Graphics wise, it’s not too bad. It’s not the best looking racer I’ve ever played, but it’s certainly not the worst. There are some areas it becomes silly, like under your bonnet. If, like me, you crash a fair bit you will get to see the engine, and it’s horribly low res compared to the rest of the game.

At night the game does look fantastic though, and I think night races are probably my favourite graphics wise.

The sound effects are outstanding, but I very much expected this from such a big name racing title. The cars all sound very real and meaty. I feel like I’m actually there if I turn my speakers up a bit and the atmosphere is fantastic due to this.

The only thing I have been unable to test currently is the online modes, but I will be giving them a blast shortly. If anyone wants to join in feel free as it will probably be on a livestream.

What I don’t like
You can’t just quit a race/event, and come back to it. If you have to go out, or go do something for a while you either have to finish the race, leave your PC on, or face an instant loss. I get this won’t be an issue for a lot of people, but imagine if you get a bug, or your PC is screwing up and you need to quit. You can’t just start that race again, you lose. You can at least quit the current season, and start completely over, or go with a different discipline, but for me it’s slightly annoying.

One of the cockpit views is so blurry it’s actually quite terrible, I quickly switched away from it after I tried it—gross.

The crowd is also noticeably bad, especially when you win a race and see them clapping. Their models are truly terrible.

Final thoughts: It’s smooth, very smooth and I love it. It’s about damned time we had a more realistic racer on Linux. It’s probably their smoothest port to date for me, and I think a lot of you will feel the same about it. If you’re not part of the FPS police, you will enjoy it a lot.

We now have the arcade style racer Showdown, a more realistic and varied racer with Autosport, the only thing missing is a good rally game. Bring it on Feral Interactive, I look forward to seeing what else you can bring us racing wise (on top of your other planned ports of course!).

We do often include affiliate links to earn us some pennies. We are currently affiliated with GOG and Humble Store. See more here.
About the author - Liam Dawe
I am the owner of GamingOnLinux. After discovering Linux back in the days of Mandrake in 2003, I constantly came back to check on the progress of Linux until Ubuntu appeared on the scene and it helped me to really love it. You can reach me easily by emailing GamingOnLinux directly.
See more from me
Some you may have missed, popular articles from the last month:
The comments on this article are closed.
68 comments
Page: 1/7»

View PC info
Downloading... Haven't played a racing game since GT5 on my ol' PS3. Got the complete package - one can never have too many cars and tracks.
0 Likes
jochenh 10 Dec, 2015
Great! Downloading it right now.
0 Likes

chrisq 10 Dec, 2015
View PC info
As much as I've been waiting for this game I can't help but being a bit disappointed of the price.

It has been on sale several times the last few months at 75% off and basically for free on Humble Bundle.
To top this off the feral store, where I'd like to buy it, are selling it for close to 50% higher price than the complete package on Steam...

I will certainly get it, it just bad paying Euro 70 for something that will go for ~$10 in a few weeks at xmas sale.
1 Likes, Who?

View PC info
That was a ballsy pass going from 5th to 3rd.
3 Likes, Who?

View PC info
It's going to take me a while to download it, but that gives me some time to hook up the ol' Logitech G27 :D
0 Likes

Quoting: slaapliedjeIt's going to take me a while to download it, but that gives me some time to hook up the ol' Logitech G27 :D

If you're using archlinux I just made a package of the 4.3 kernel with the experimental drivers needed for FF...
0 Likes

z3ntu 10 Dec, 2015
View PC info
Downloading it now. I got it last week with the Humble Bundle, I hope my GTX850M on my laptop will handle it :)
Trying it out on my "normal" computer with an Sapphire Radeon HD7970 won't work because either the PSU or the Mainboard is broken ...
0 Likes

Quoting: KeyrockThat was a ballsy pass going from 5th to 3rd.

I was holding onto my pants hoping it worked out.
1 Likes, Who?
1/7»
While you're here, please consider supporting GamingOnLinux on: