By BTRE - 4 November 2016 at 2:21 am UTC | Views: 6,610
Originally released as part of a Humble Monthly, this retro-inspired platformer is now available for standalone purchase. 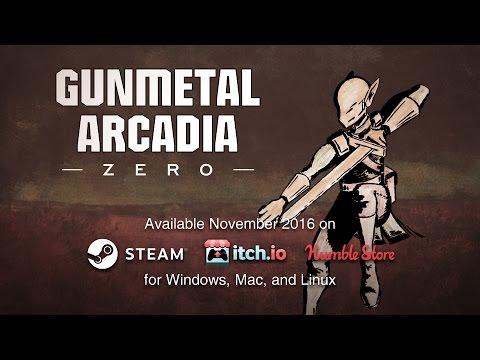 YouTube videos require cookies, you must accept their cookies to view. View cookie preferences.
Accept Cookies & Show   Direct Link
Gunmetal Arcadia Zero is the result of a collaboration between developer J. Kyle Pittman (Super Win the Game) and Minor Key Games (Eldritch, Slayer Shock). This side-scrolling action-adventure game features many of the things that made Super Win the Game interesting, including an authentic chiptune soundtrack (you can listen to the whole thing on YouTube) and several visual filters that approximate the CRT-viewing experience. It's a day-1 Linux release, too, which is always a nice touch for those of us who enjoy saving the world on our platform of choice.

The sequel, Gunmetal Arcadia, is still in development and should have some of those ever-popular roguelike elements in addition to the action platformer recipe. It should be out in early 2017.

Official About
Unrest brews in the city of Arcadia, and a monstrous enemy approaches. As the young elf Vireo, you will heed the call of adventure: choose a weapon, choose a side, and rise to be the hero your city needs. Gunmetal Arcadia Zero features classic platformer action and world-class CRT simulation technology that evokes the aesthetics of past generations.

You can pick up Gunmetal Arcadia Zero on the Humble Store or on itch, the latter of which has a limited-time pay-what-you-want offer for the game. A Steam release should be coming soon once it clears Greenlight. Article taken from GamingOnLinux.com.
Tags: Adventure, DRM-Free, Greenlight, Humble Store, Itch.io, Platformer | Apps: Gunmetal Arcadia Zero
1 Likes , Who?
Share

Oh and the name doesn't mean anything but coincidentally could be pronounced as "Buttery" which suits me just fine.
See more from me
Some you may have missed, popular articles from the last month:
The comments on this article are closed.
9 comments
no_information_here 4 Nov, 2016

I seem to be one of those rare people that don't like rogue-like games, so I was sad when Kyle Pittman announced Gunmetal Arcadia would go "rogue". However, another adventure platformer has me excited!

I loved his other two games. He has an uncanny ability to capture the retro feel while still being an awesome game with modern sensibilities.

Edit: Here is his blog entry announcing this release:

View PC info
I'm not really a fan of the retro-for-the-sake-of-retro aesthetic (and I don't have nostalgia for NES graphics or the NTSC-tinged colours), but Pittman has proven he can create a mean platformer. I'm not too happy that the sequel is picking up roguelike stuff though, especially if it means permadeath.

That came out a bit negative, didn't it? I am interested and will very likely buy and enjoy both games at some point. I'm just not thrilled about the design.
0 Likes

View PC info
I like the effortless way the general generation of games recaptured here used to take you through differently flavoured exotic environments with characters that got right down to business and didn't require an entire developed world behind them. Everything was sparse but colourful, so every individual element mattered and "shone". It was dreamlike and mysterious, not a "rational" simulated reality. I also like the unreliable, "organic" CRT aesthetic, although I have no nostalgia regarding the NES in particular (due to location/circle of friends, not age). So... yeah. I'm not terribly obsessed with playing games but have a curious appreciation for them.
0 Likes

This game, Gunmetal Arcadia Zero, is not a roguelike.
0 Likes

They work each on their own projects, but in the same "studio".
0 Likes
Mrokii 7 Nov, 2016
As far as I can see and understand the term, there's nothing roguelike in this game.

In fact, after having played it to the end, I think it's quite the contrary. The levels aren't created randomly, they're fixed, the monsters appear at the same position each time, and so do "shops" or any other figures in there.

Also, after having played "Super win the game", I think this one here is a bit of a disappointment. The problem isn't so much that there is no reason to re-play it once finished but that the game itself is far too short, there are no secrets to find (as all the reachable areas are pretty easy to recognize) and the story is (to me) kind of forgettable as well. Also, there's nothing that poses any kind of real challenge. The difficulty to me seems to be something a child could master, and the bosses are laughably easy to defeat. There are basically two types of weapons, one for melee (sp?) and one for shooting (there are more "types", but I didn't see much difference between them). All you have to do is to do some grinding (to collect gems and money mostly) to buy said weapons and that's all to beat the game.

I'd say the retro-feeling is captured well, as usual, but I didn't find anything else that made this game worth playing for a longer time (let alone re-playing).

Quoting: MrokiiAs far as I can see and understand the term, there's nothing roguelike in this game.