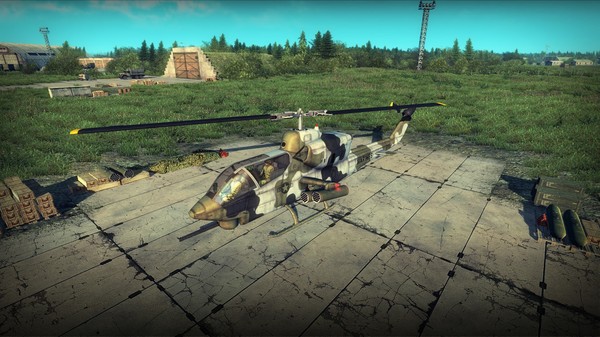 Heliborne [Steam], a surprisingly good Helicopter combat game has recently had a big revamp involving the flight and combat models.

The developers claim the Helicopters now feel more realistic and different to each other, with their improved flight model. So you now need to learn how to handle each of them, instead of them all being the same.

On top of that, the new damage model sounds pretty interesting. You no longer have a plain damage counter. Instead, there's now five critical modules that have various effects when damaged. A tail boom being critically damaged can make you spin out of control, for example.

To prevent you getting lost, pressing TAB will now bring up a tactical map with much more information than the small mini-map.

There's a lot of smaller changes too, like landing being simpler and easier, but a rough landing can result in damage. You can read the full changelog here.

I like the game, but I think they badly need to overhaul their UI. It's messy, confusing and not very inviting for new players to the game. I imagine that's part of the reason why not too many people actually play it.

Article taken from GamingOnLinux.com.
Tags: Early Access, Action, Steam
4 Likes, Who?
We do often include affiliate links to earn us some pennies. We are currently affiliated with GOG, Humble Store and Paradox Interactive. See more here.
About the author - Liam Dawe

View PC info
It's good to see them improving the game.

What saddens me is how low the player count is.
Just 20 people on average . I think Cube 2 has more than that :(
0 Likes

Quoting: razing32It's good to see them improving the game.

What saddens me is how low the player count is.
Just 20 people on average . I think Cube 2 has more than that :(

I'll play it for singleplayer anyway. As life goes on, I don't have time to devote to online games.
0 Likes

View PC info
It's a great game, and the lack of players online is not enough to stop me from finding a battle to join. The game only needs actually 3-4 players to be fun. I played 6vs6 PVP, 4vs AI coop, 2vs5 etc, and i even played a coop 2vs AI and it was excellent. I was the spotter, he was the fighter, and we coop without a word, until our victory. Great experience really.

Plus, the game runs well, it's pretty, and despite being more arcade than sim, it's still offering a lot of subtilities to master.
1 Likes, Who?
While you're here, please consider supporting GamingOnLinux on: