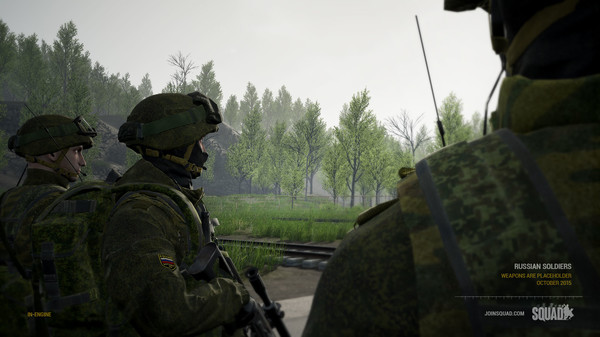 A developer of Squad mentioned again that they want to do a Linux version, but it's not a priority. The developer asked people to comment on his reddit post in they want Linux support.

It's a useful way to see if there's any number of people who want it, so let's get to it shall we? Realistic FPS games are something Linux very badly lacks.

QuoteWe are currently not building Linux versions but many of us would like to support it. The main problem right now is that we have builds for Linux but some things are not supported like the VoIP system and also dump file generation plus whatever other issues are yet to be found. So it is at a very low priority right now, but we'll see how many others want us to support it. They might as well post here...

About the game (Official)
Squad is a 50 vs 50 multiplayer first-person shooter that aims to capture combat realism through communication and teamplay, emphasizing both strong squad cohesion mechanics as well as larger scale coordination, tactics and planning. It features large open maps, vehicle-based combined arms gameplay, and player-constructed bases to create a heart-thumping, visceral gaming experience which mixes organized tactical multi-squad planning with split second decision-making in real-world scale firefights. Article taken from GamingOnLinux.com.
Tags: Early Access, Editorial, FPS, Steam
0 Likes
We do often include affiliate links to earn us some pennies. We are currently affiliated with GOG, Humble Store and Paradox Interactive. See more here.
About the author - Liam Dawe

View PC info
Posted. Would love to get it on Linux, even though I have Insurgency now.
0 Likes

View PC info
Been asking Xcept1 about it on the ocuk forum for a good while now.

View PC info
For the sake of those who like multiplayer-only games, I hope this gets released. Since there are no bots though, I'm not interested in it myself.
1 Likes, Who?

View PC info
I posted on the thread. Would be awesome to have Squad on Linux.
0 Likes

View PC info
Looks nice. At first, I though it was a Squad game (KSP Developer)

0 Likes
Madeanaccounttocomment 20 January 2016 at 4:21 pm UTC
100 hours into Insurgency and I'm still really liking it but some variety could be nice.
0 Likes