Credit to GOL fan "hardpenguin" for his idea, to check on how the rise of "Simplified Chinese" as a market on Steam has directly affected the Linux market share. The results are—interesting.

I should state that, while obvious to some, people still get confused by all this (especially me, I'm only human after all). We are talking about percentages, not absolute numbers. We have no idea what the real numbers are behind this, only the percentages Valve give us by surveying a set of their user base.

First of all, let's take a look at what's happened to the overall Linux market share as shown by Valve in their hardware survey. It doesn't look good, but keep reading after. 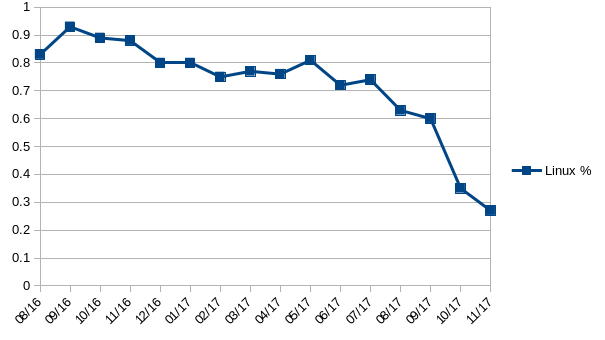 As I said, that looks like an unhappy chart. Over that exact same time period, let’s look at what happened on Steam with “Simplified Chinese” as a language in comparison with English: 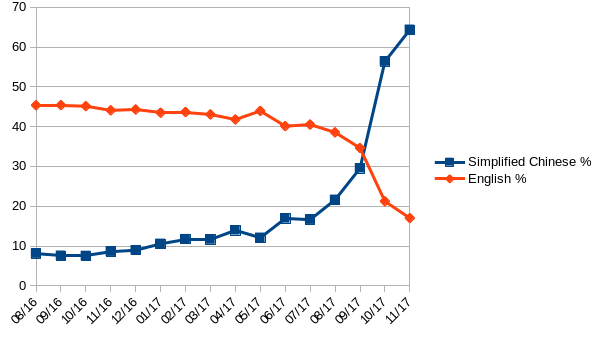 Well then—that’s some big growth you’ve got there. One month can be written off as an anomaly, but the trend is clear there. So what happens when you compare what Steam shows as the overall Linux market share, against that same market share when you take out Simplified Chinese and when you’re just looking at English: 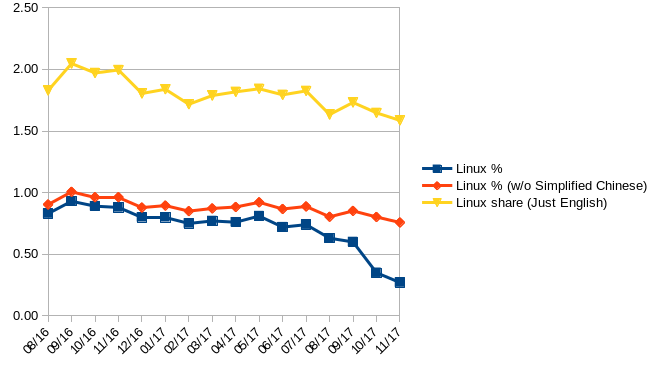 So, from our experiment here, it shows Linux is currently in a decline in terms of "overall market share" on Steam. No need to sugarcoat it or hide from it, the data is there. However, it's nothing close to how bad it may seem, given that you should obviously see how Simplified Chinese rising sharply has directly affected it, it's clear as day when you simply remove it.

To mention an important fact, Steam is not just growing in Asia, as shown by Valve's own info. Before we get people looking at the lines without Simplified Chinese and thinking Linux is going down by itself anyway. It's just that Asia has grown more rapidly than others. It's quite clearly a Windows-orientated marked too, so even if Linux has actually grown during that time, it's just been massively outpaced. The point? It's not as bad as it seems.

Something to keep in mind, that I’ve mentioned before numerous times: Steam is constantly growing. We don’t know what the true numbers are, so it’s literally impossible to get the real picture. As mentioned at the start, we just don’t know what the total amount is each time they do the Steam Hardware Survey in terms of the amount of people surveyed and the total amount of registered Steam users.

The fact remains that a lower percentage for Linux one month, against a higher overall number of users, can end up as an increase in total numbers of Linux gamers on Steam. I'm not saying it is or it isn't though. For us to know if the real amount of people using Linux for gaming on Steam is higher or lower, we need Valve to release the actual numbers behind the curtains. Something many people have been repeatedly asking for.

What will be interesting to see, is how Linux bounces back once the hype around certain popular games begins to fade. I don't want to repeat what I've already said too much, but it will happen. I imagine it will be at least a year before we see that happen and how far will Linux progress behind the scenes in that time to be ready? The open source Mesa drivers have come along at a staggering pace to improve AMD performance on Linux, decent VR supporting is slowly coming along, we've got games being released all the time and more. What we need to think about, is preparing for the bubble bursting back in our favour.

This was an interesting way to spend a Saturday evening, I shall return to our normal Linux gaming news on Monday!

Note: All this data was manually gathered and sorted by me, using the data available from Valve. Credit would be appreciated it you pinch it.

Article taken from GamingOnLinux.com.
Tags: Editorial, Steam
18 Likes, Who?
We do often include affiliate links to earn us some pennies. We are currently affiliated with GOG, Humble Store and Paradox Interactive. See more here.
About the author - Liam Dawe

I am the owner of GamingOnLinux. After discovering Linux back in the days of Mandrake in 2003, I constantly came back to check on the progress of Linux until Ubuntu appeared on the scene and it helped me to really love it. You can reach me easily by emailing GamingOnLinux directly.
See more from me
Some you may have missed, popular articles from the last month:
The comments on this article are closed.
75 comments
Page: «2/8»

sarmadThat's still not good, considering that China is the future biggest market. This chart means Linux is completely ignoring the Chinese market.

That seems like an odd way to look at it (unless you mean that more game devs that port to Linux should also localize to Chinese). There's virtually no one that would profit from championing Linux adoption in the Chinese market (or any other market) from a commercial standpoint, unless you're a company that lives exclusively off of Linux--and how would a single company make Linux popular in the mainstream? The whole ecosystem is community-driven, so it's not so much a matter of targeting or ignoring markets, but of volunteers in those regions hearing about Linux, becoming passionate about it, contributing to it and spreading the word/software.

I think the contrast between English-only and All but Chinese speaks volumes in that regard, compared to the very slight difference between All languages and All but Chinese. It means that adoption in China is slightly less than the world average, while adoption in English-speaking countries is twice as high as that same average. Considering Linux originated in the West and is primarily developed in English, that comes as little surprise. And it means that Steam growing in any regions where English isn't the main language will lead to lower Linux market shares (barring any other countries where Linux is comparatively strong, if there are any).

I just don't see anyone investing money into growing Linux use in the Asian market anytime soon, so any progress we make there would have to be organic. There needs to be enough devs and translators to fully support a locale for potential users in that region to have a chance to bite and stay hooked. Usable Linux software shrinks significantly if you take English out of the equation (as well as community support), and for a vast number of people, that's a deal breaker.
1 Likes, Who?

ageresThe most popular Steam games in China are Windows-only GTA V and PUBG, so even if there are millions of Linux users in China, they see no point joining Steam. Maybe if these games got Linux versions, we would see growth of Linux market share because of Chinese Linux users.

These games are also very popular outside China. In the past, CS had the omnipresence of PUBG. Now we see the old chicken or the egg dilemma. Valve had bridged that for a while. Unfortunately, the market has never really accepted it.

I think it will only change fundamentally when cloud gaming like Playstation Now becomes more widespread. Linux will undoubtedly play a more important role, as companies like Valve would otherwise become completely dependent on Microsoft. But with cloud gaming it doesn't really matter what you use as a client system.
0 Likes

I mean, there are very few games popular in China. An average Chinese Steam account has GTA V, PUBG, CSGO/Dota and nothing else.
0 Likes

View PC info
Buying new PC is synonym with Windows pre-installed with it. Linux, you must install it when you know it exists. So I think there will be a rebound in january or february.

View PC info
I'd like to see same kind of analysis with GoG, Humble and Itch.io

I take my games from, in order : Steam (less and less), itchio (more and more), Humble, Dev's websites, random Bundles like Fanatical
0 Likes
Voltage 3 Dec, 2017
Personally, I had a bug due to different xbox360 driver and I had to reinstall My linux I wasn't happy, but it happen.
The fact is that I want to install next ubuntu 18/04 which will replace xorg by wayland ( as I understand ? ), so I play on my dual boot windows yet.

Otherwise, last year I buy so many games, I think I wasn't the only one with that game bulimia.
This year I realise that I play less than I could believe, so I bought less games.

Also It wasn't a great year to linux ports as was last one.
I still have a wish list, and many of those games in are windows only.

China is a loooot of people. Linux needs Chinese localisation, as people mention. Not just of the OS, but the distro webpages as well.

However, remember the whole "Firewall of China" thing? An OS that gives full control to the user might be heavily frowned upon by the rulers in China. People have been put in jail for less over there.
2 Likes, Who?

QuoteWhat we need to think about, is preparing for the bubble bursting back in our favour.

The bumpy ride isn't over yet, in fact it is just beginning. Nintendo are being very kind to indie developers and encouraging them to port to the Switch. Quite a few indie devs are aiming their sites on that platform down to it being much less cluttered store front and it's dual purpose as a portable device, perfect for games such as Stardew valley. The switch (is it linux based ?)even got AAA PC title Doom albeit with reduced graphics using Vulkan.. Linux not in sight. 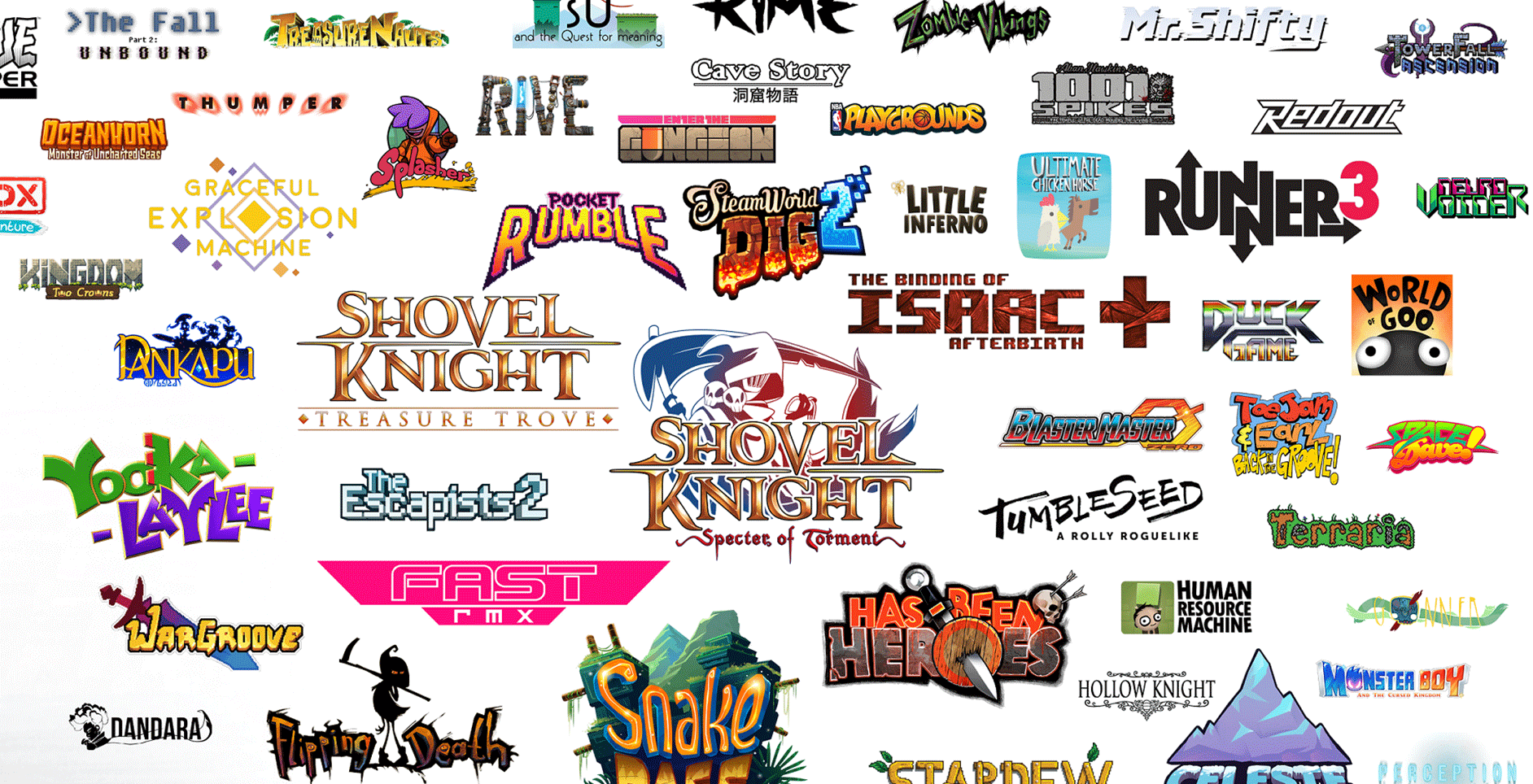 They are making bank and have a huge captive audience.

To be honest, the Switch is probably going to be my next big gaming purchase.
1 Likes, Who?
Guest 3 Dec, 2017

Mountain ManTo be honest, the Switch is probably going to be my next big gaming purchase.

QuoteWeird part is that they are paying for software (at least for games like pubg).

This speech is 20 years old. Now there are lots of well off Chinese who can pay for their OS and games.

I know that it's quite dated, but as most of Chinese seems to be using W7 instead of 10 (being the last one a free update from the former) and that Liam thesis was that this update is not happening due that most of them use a pirate copy of W7, it's clear that they are not willing to pay the price of a Windows license. So, it's not that they don't want to pay for software, it's that they cannot afford some of the prices of Windows or don't see the point of paying a Windows license (and I really agree with them if you ask me).
0 Likes
«2/8»