Hot Guns, a fast-paced action platformer that reminds me of Broforce 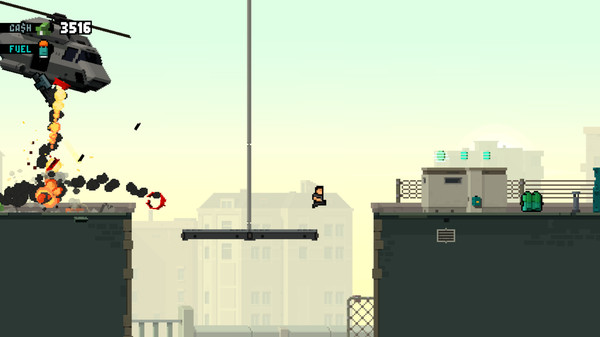 I absolutely adored Broforce after completing it, so I'm really happy that Hot Guns [Steam, Official Site] supports Linux as it does remind me of it. The game released recently without much fanfare, which is a shame as it's great.

It's very much a cheesy fast-paced action platformer, with a little destruction thrown in. You can explode barrels, cover and a little bit more. You can't blow up the world in Hot Guns like you can in Broforce (there's limited set pieces you can destroy), but that doesn't make it less of a game to me. It feels tight and polished with its own feel and boy is it fun!

There's a lot of variety on offer here, from dodging speeding motorbikes, exploding barrels, mines being dropped from helicopters and tons more. The trickiest one has to be the kamikaze people that run at you holding a mine, especially tricky when they are in a group of people you need to jump down and take out.

The level design is really quite interesting too, especially when you need to throw away you weapon for a moment to jump higher, grab something and then run back to get your weapon. Timing is key a lot, as is paying real attention. One such moment was near the start where you're forced to throw away your weapons and dodge someone throwing grenades and an automated turret, while trying to get the grenades to land in a specific place. I got stuck on that for far too long, giving me some real "OH COME ON!" moments. It's a time when I really think there should be checkpoints, instead of making me do the easy part of the level repeatedly.

You also get a jetpack that has limited uses, when it runs out if flies off you and explodes — glorious. Making use of that explosion is even more fun, so many little things put together to make such a fun little game.

On top of the campaign it has a local multiplayer battle mode, which I haven't tested, but it sounds like a lot of fun.

It currently has only 9 reviews on Steam, which I'm really surprised by, but they likely have no advertising budget. Anyone who liked Broforce should check it out. The Linux version ran without issues as well, Steam Controller worked perfectly and all, so well worth a look.

Narvarth 9 May, 2017
View PC info
I finished it during the early access. It is quite cool, somewhere between Rick dangerous and Broforce. Some parts are really difficult (not for casual gamers...).

This game looks curiously similar (at least for the pixel arts).
0 Likes
M@GOid 10 May, 2017
View PC info
I bought it after this and it's fun, but the return to the start of the levels is not. The developers lost a opportunity here to make a insanely fun game because of that.
0 Likes
While you're here, please consider supporting GamingOnLinux on: