Something I had been meaning to check out for a while is how to easily record videos of games, but have my microphone and the game audio in two different tracks. It turns out, it's actually quite easy.

First of all, you need to go into OBS Studio settings, click Output and then set the output mode to Advanced. When there, select "Recording" and tick 1 & 2 (or however many tracks you need) next to "Audio Track" like so: 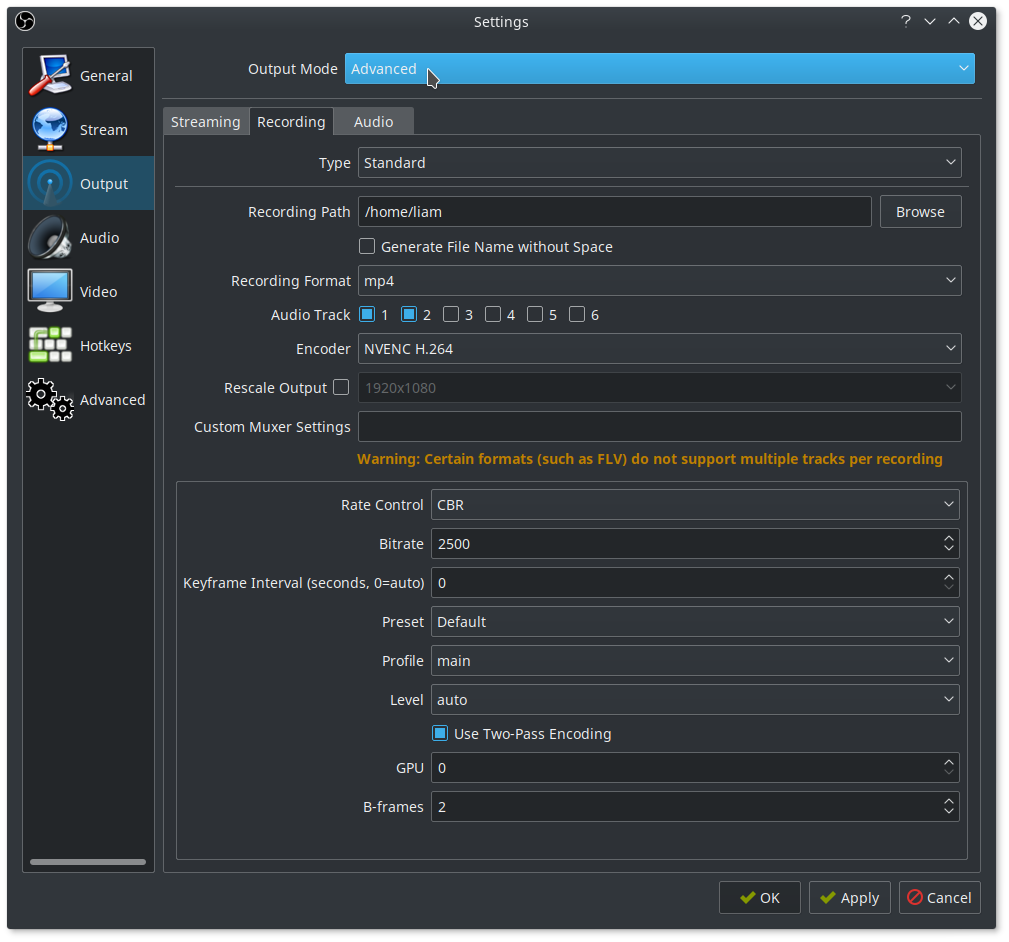 Next, you will need to go back to the main OBS Studio screen and hit the little cog next to "Mixer" is noted here:

Once there, you can then assign what audio devices go to what tracks:

And that's it, you can record away. Sadly though, OBS Studio doesn't store audio files separately to the video as it's all mixed together, so you will still need to split the audio tracks from the recording. This is also super simple to do with the program "Avidemux" (available in most repositories).

Inside Avidemux, you just need to load the video file, then select the Audio menu from the top of the application and pick which track you want to export:

Once you have selected it, just select Save from the Audio menu at the top and then you have your audio track nicely separated.

Why is any of this useful? Well, you might want to edit what you actually say after the recording is done (audio levels, coughing, sneezing or whatever). You might also want to lower the game audio in the sections where you talk and so on.

There's many reasons why you may want to do this. For me personally, I don't like recording myself after I've played a game. I prefer to record myself while I play it to throw out thoughts as they come to me. Recording them together at exactly the same time means I don't have to mess about with matching up my microphone audio to the correct spots in the gameplay. It just makes things simpler!

There's ways to do this in the command line too of course, but this is the simplest solution for me personally and this is not meant as a command line tutorial. I say this, as there will likely be the inevitable "but but you can just do these commands!" in the comments. However, if you have a handy command line snippet that will rip all audio tracks from a video, be sure you do share it in the comments!

At the very least, I hope some people find this useful. Article taken from GamingOnLinux.com.
Tags: HOWTO
12 Likes, Who?
We do often include affiliate links to earn us some pennies. We are currently affiliated with GOG, Humble Store and Paradox Interactive. See more here.
About the author - Liam Dawe

View PC info
Wow thank's ! I have to record some video chat and this article just come in time ! Thank you for sharing Liam !

GuestThis is more of a guide than it is "news".
I'm thinking maybe a new section on the site should be for things like this? Kinda like the twitter/facebook feeds down the side.

I feel the news section is being oversaturated with non news articles.

Eh? I've posted 3 articles that could be classed as guides this entire month. One last month, and before that the last was November 2016.

Respectfully, I completely disagree.
4 Likes, Who?

View PC info
I agree, could have "permanent articles" such as this guide, where to buy games (like, Humble vs G2A) and so.

Nice one, i tried OBS a little but i'm not into video, i prefer text, but articles like this makes me want to try more.
0 Likes

View PC info
You don't necessarily need Avidemux to split the audio track from the video, Audacity will do that as well. What I usually do is use Audacity to split the audio from the video file, add the mic track, clean it up a bit (noise reduction and such), merge the tracks together in Audacity, then merge the video file and the newly created audio track ising mkvtoolnix, since I have no need to reencode the video.

GuestEh? I said oversaturated with "non news", and that "this one" was a guide.
I counted 6 "non news" articles just on the first page.

Well GOL is a community site, not a news portal.
0 Likes

GuestEh? I said oversaturated with "non news", and that "this one" was a guide.
I counted 6 "non news" articles just on the first page.

Well GOL is a community site, not a news portal.

Yeah that's a key point we need to work on communicating better, we aren't just a news website. News is just one of the things we do here.

What I will be looking to do is two things:
1) Allow people to filter out tags from their GOL homepage
2) Have a few featured tabs along the top of the latest articles to quickly go to certain tags like HowTo, Interviews and so on.
2 Likes, Who?

View PC info
I personally like the mix of how tos, community posts, interviews and pure news articles. That said the below is a great solution to those who would like to filter certain content out without being detrimental to those who still enjoy it.

liamdaweWhat I will be looking to do is two things:
1) Allow people to filter out tags from their GOL homepage
2) Have a few featured tabs along the top of the latest articles to quickly go to certain tags like HowTo, Interviews and so on.

liamdaweEh? I've posted 3 articles that could be classed as guides this entire month. One last month, and before that the last was November 2016.

Eh? I said oversaturated with "non news", and that "this one" was a guide.
I counted 6 "non news" articles just on the first page.

6 in the front page? I had to go back to Feb 15th to find the last one, about how to find Linux releases on Steam. What are you terming 'non-news'?

Regardless, I like the mix, so maybe Liam's suggestion of changing the site to allow filerting by tag will keep everyone happy.
0 Likes

View PC info
I've been doing separate recordings of game audio and microphone for a while now (though in a non-standard way*), and it really is great. Being able to adjust sound independently is fantastic.

*currently I'm using SimpleScreenRecorder for computer audio and an old smartphone to record my voice, which I put together during editing. Not exactly elegant, and when I have the funds for a new (good) microphone I hope to get this sort of thing working, but it works to establish the general principle.
0 Likes

View PC info
One thing I've been trying to find for a while is how to record different programs on different tracks. EG: I want to separate Discord's audio from CS:GO's. Anyone know how to do that, since I can't seem to figure it out myself?
0 Likes
1/2»