id Software going all-in with Vulkan, some interesting details about that and Linux for Stadia

Thanks to a Twitter tip, I've watched over the video of id Software talking about Doom, Vulkan, Linux and Google's Stadia and it's really quite interesting. For those who don't know what Stadia is, you can see this previous article. In short, it's Google's game streaming platform powered by Linux and Vulkan.

The thing is, id Software actually talked about having a Linux version of DOOM back at GDC last year that was never released, at least now we know why.

You can see the video below, it's currently an unlisted on YouTube and towards the end it does have some footage of the new DOOM Eternal. Some quick thoughts and info below if you can't watch it. 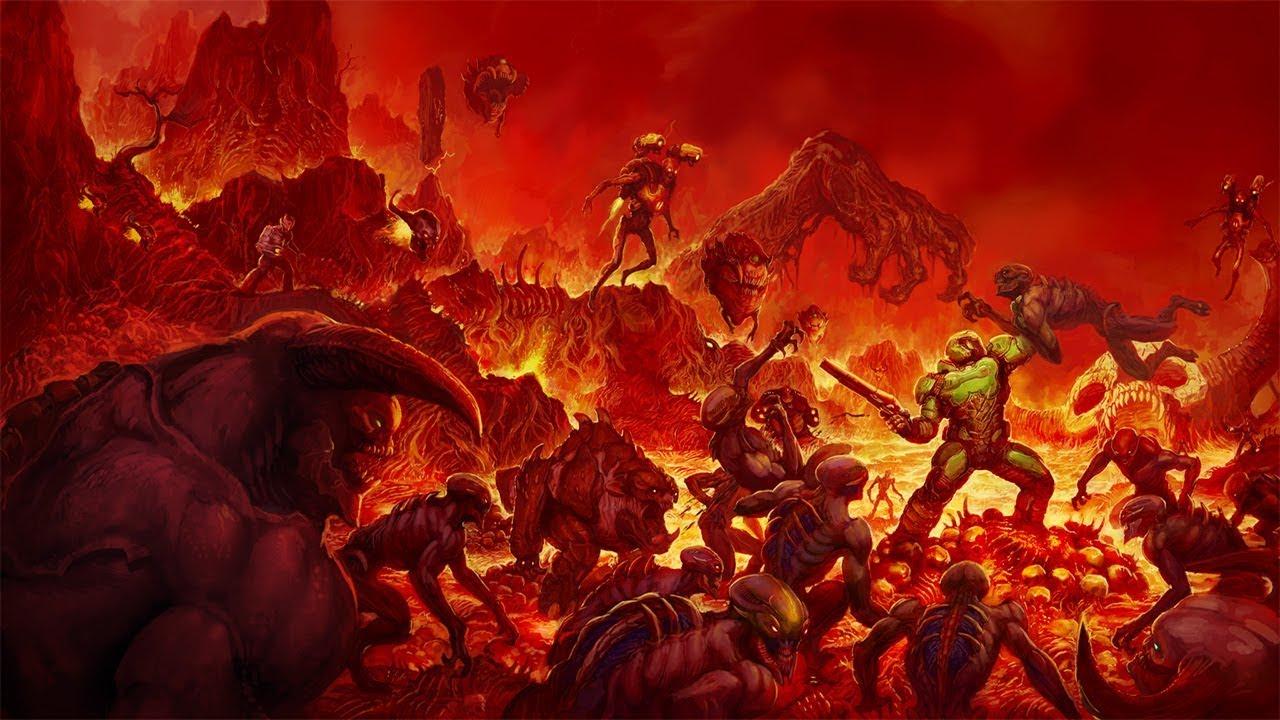 They go over lots of technical details, which I'm sure some of our readers here will appreciate.

I did particularly enjoy the "Why Linux?" slide with an answer of "It's not Windows" which seemed to give the crowd (and me) a little chuckle. The developer then also touched on how Linux outside of servers has been largely ignored, with a joke of articles talking about how "Linux gaming doesn't suck now, very convincing…and even that small portion is subdivided along different distributions, so it's really no wonder that no one pays attention to poor Linux".

I won't get into a long debate about how Linux gaming doesn't actually suck, but I will most likely be preaching to the choir. Linux gaming certainly isn't perfect but it doesn't suck and that's about as far as I want to get into that directly right now. It's also a shame that multiple distributions is still a hassle and common problem for developers. Anyway…

As for the software stack on Stadia, that was also talked about. Apart from the game and Google's own "libGGP" everything else seems open. It's using Pulse Audio, Vulkan, libc++, glibc and of course the Linux Kernel. They're doing this in the hopes it speeds up adoption, since getting a game onto Stadia would involve prototyping it on a normal Linux distribution like Ubuntu (which is what id Software did) and then you're mostly done by the looks of it.

As for their own software, for idTech7 their latest game engine, they said "everything uses Vulkan now and by that I do mean everything—the engine, idStudio, even our helper tools". At least for future games released normally, they should perform well when using Steam Play.

I'm still torn on Stadia for the reasons I gave before. I personally still consider Stadia to be Linux gaming, to me basically anything done on a Linux box is Linux gaming. After all, if I'm playing on my Ubuntu PC, with Stadia which is also powered by Linux, what about that isn't Linux gaming? I'm sure some of you will have interesting answers to that in the comments (and feel free to debate it—politely please!).

However, there's tons of issues it has to overcome for me. There's a lack of ownership of the games so they could be taken away at any time, latency which even people checking out the demo at GDC this year said was an issue (PC Gamer: "latency is clearly present", "the delayed input to screen loop is very noticeable" and so on - many others said the same and worse), likely no modding support, massive bandwidth use and so on.

What are you current thoughts on Stadia streaming platform? Will you be using it?

Article taken from GamingOnLinux.com.
Tags: Google, Stadia, Vulkan
35 Likes, Who?
We do often include affiliate links to earn us some pennies. We are currently affiliated with GOG, Humble Store and Paradox Interactive. See more information here.
About the author - Liam Dawe

I am the owner of GamingOnLinux. After discovering Linux back in the days of Mandrake in 2003, I constantly came back to check on the progress of Linux until Ubuntu appeared on the scene and it helped me to really love it. You can reach me easily by emailing GamingOnLinux directly.
See more from me
84 comments
Page: «2/9»

No normal reason. Usual stupid "legacy publishers don't get Linux" problem. Stadia's (potential) size is the only thing that can break through their backwards minds.

Really, this was answered indirectly when they showed the market share charts and talked about Linux being ignored. Too small, same answer as always for the bigger publishers.
3 Likes, Who?

mirvStadia has problems, sure, typically from latency I would imagine.

Of course, if you want to take advantage of stadia, you should have optical fiber or cable.

Fibre connections are mostly about bandwidth - you'll get just as good speed for copper lines (actually you can strangely sometimes get better, depending on the equipment in use and intercepting nodes, but that's really not the point). I differentiate between bandwidth and speed - you don't need high bandwidth upstream because input won't really be much data. You do need speed however - constant small amounts of data getting to the rendering backends as quickly as possible.

And then there's any sort of movement prediction that the server might be able to do, and possibly it could send a few frames at a time, and pick which one is most appropriate. There are tricks that can be done on the downstream, and they can adjust the resolution as necessary.

It all remains to be seen how well it turns out in practice of course, but I don't think Google are relying on everyone have optic fibre directly into their house. They wouldn't be gearing this up if that were the case - they obviously think connections are good enough now to get started with Stadia (and they would know, they've got the data from Youtube to analyse).
5 Likes, Who?

Really, this was answered indirectly when they showed the market share charts and talked about Linux being ignored. Too small, same answer as always for the bigger publishers.

They did the build but won't publish it... They paid for the Linux development anyway, but won't start to make it profitable by taking profit from Linux customers... Just... doesn't... make... sense. 1-2% of marketshare is still better than 0$... Must have failed my maths courses.

View PC info
Me as Linux user and also developer don't understand the problem most developers has with "Distributions" there is only one thing to remember. Don't even ever redistribute *.so files from a certain distribution with your game because it will fail on any other distribution and newer version of that particular distro where you'd pick up the *.so's from.

Feral once hat a time where they distributed Ubuntu so's with their launcher and of course it fails to launch on any other Linux platform which is not Ubuntu (16.04 for example) or at least very close. The fix was, for any distribution just do remove one *.so file and symlink it with the one from your distro and everything was working well. (Just let the OS choose which one to use ^^")

If you as developer just keep this one thing in mind when thinking about distributions and DON'T do this you will have no hassle in runnign the game on any other Distro put there. Except if it is a really outdated distro which dose not support certain frameworks in the right version. But all in in Distributions dosen't matter.

I could get crazy on this topic every time I hear or read it.
It's like saying a bird from the class "duck" is not a bird anymore.

View PC info
Thanksfully, Doom played fantastically on Proton (except for multiplayer). However, I don't consider "it's going to be put on Stadia" a good reason for not releasing the Linux build.
2 Likes, Who?

liamdaweWe have now idea what this point what libGGP is though, probably not something they can just open up, as it's likely hooking into their Stadia API. I imagine that's what it would be for anyway.

Still, I see no point in keeping it closed. I.e. for developers to develop for it quickly, SDL can make some shim that emulates Stadia API locally. That's the whole point. It can also allow porting games from Stadia to normal Linux easier.

I was under the impression at about the 30minute mark that GGP provides a lot more for the game developer than a rendering surface. Kind of like how Steam provides more than just a download (matchmaking, achievements, cloud saves, etc). Fortunately (I guess...?) this kind of thing can't be too integrated into a game if they want to release on multiple platforms (e.g Stadia and Steam), so it shouldn't block a desktop version...maybe.

Not finished watching still, things to do, it'll take me a while longer between odd jobs.
1 Likes, Who?

MohandevirThey did the build but won't publish it... They paid for the Linux development anyway, but won't start to make it profitable by taking profit from Linux customers... Just... doesn't... make... sense. 1-2% of marketshare is still better than 0$... Must have failed my maths courses.

Could be they're wary of support costs outweighing the sales.
6 Likes, Who?

MohandevirThey did the build but won't publish it... They paid for the Linux development anyway, but won't start to make it profitable by taking profit from Linux customers... Just... doesn't... make... sense. 1-2% of marketshare is still better than 0$... Must have failed my maths courses.

Could be they're wary of support costs outweighing the sales.

Maybe, but it will serve the Stadia cause, considering the fact that it's all standard parts... Oh! With Stadia, they don't have to troubleshoot Linux with Nvidia hardware. That must be it.

mirvFibre connections are mostly about bandwidth - you'll get just as good speed for copper lines (actually you can strangely sometimes get better, depending on the equipment in use and intercepting nodes, but that's really not the point)

Fiber optics commonly has lower latency than copper connections (i.e. coaxial). If that's what you mean by speed.