The developers of Ballistic Overkill [Steam] have pushed out a new update which features a major change to the way Team Deamthmatch works, they also added in Steam Workshop support. 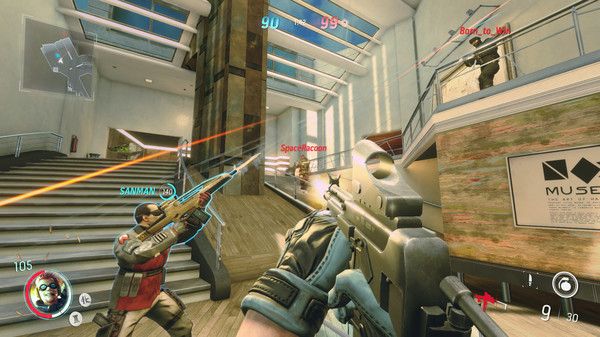 Ballistic Overkill was one of my favourite online FPS games for quite a while, but the base-camping in the Team Deathmatch mode really did ruin it quite often. The problem was, that each team had a special safe zone that was shielded so no enemy could enter. With that, people would often just jump in and out and each time ended up camping outside. It became tiresome and just ruined the fun of it, especially when you were unable to even exit the spawn due to your base exits being covered by enemies.

This is a good change for another reason, since it opens up those sections of the maps that were shielded-off for everyone to now go through, resulting in maps that feel a bit bigger. This means it also opens the maps up for more options to get around the enemy if they're all bunched up in the middle.

The new beta rework of TDM is in-game on their official servers as an additional mode to the existing TDM, so you can play them both together while they gather feedback. I hope it works well, as it was my biggest complaint about the game, so I'm really happy they finally acted on it.

I've tested it out and I can safely say I hope they absolutely remove the old way of doing TDM. The new way was much, much better and allowed me to enjoy the game once again—I missed it!

They've also added in Steam Workshop support for players to be able to create and put up their own maps. This is great too, since the current maps have felt stale for too long as there's just not enough of them.

You can read the full update notes here.

View PC info
This was one of the last game I played on Steam last year (July) before I left Steam. The camping was just terribad. DM was the only thing worth playing at the time but that old fast with turning into sniper fest on large maps and berseker/bomber on close maps.

* What happens when the enemy team fans out to catch re-spawning players?
* Is the map editor available for Linux users to make maps?
1 Likes, Who?
Wompo 31 Jan, 2018

View PC info
I'm not too fond of how the reworked TDM sounds. It's the same as in some other multiplayer FPS games. In those the problem then becomes having a "spawn roulette", where you either respawn on the back of an enemy or someone by chance rushes into your spawn point before you have time to get your bearings. With fixed spawn areas you have a general idea of where you can expect enemies to come from. Maybe they should remove the ability to go back to the spawn area once you exit it to reduce its camping aspect.

But I'll give this the benefit of the doubt... Maybe the map size to player amount ratio is good enough for these semi-random spawn points to work.
0 Likes

View PC info
Fantastic game and I'm glad to see they finally addressed it's number one game design issue. But ever since the update before this one, latency spikes frequently and randomly. I don't know if it's something they changed with netcode or if I simply screwed something up on my end.
1 Likes, Who?

View PC info
I didn't give it enough thought before, but reading this, I realize the game wasn't fun for me for the same reason. I haven't played it in months. I will have to try this new setup. Hopefully, it's fun!

View PC info
Tried this updated TDM yesterday, first impressions were quite good. I play BO regularly and the ability to go everywhere in TDM (like in Free 4 All) felt refreshing. I haven't spawned behind an enemy nor did anyone materialised behind my own back. Will see in the long run, of course. Pity I still have frustrating lags most of the time :(
1 Likes, Who?
While you're here, please consider supporting GamingOnLinux on: