InnerSpace [Steam], an exploration flying game set in the Inverse, a world of inside-out planets without horizons is now available for Linux.

In InnerSpace, you are an autonomous drone named Cartographer, which was created by the Archaeologist from information left over by the Ancients. The Archaeologist requires your help to reach areas of the Inverse where they cannot go and so your journey begins.

I will start off by recommending a gamepad for InnerSpace. While it does work with Keyboard, it doesn’t feel good at all, you will have a much better experience with a gamepad in your hands.

Also, if you’re going to use the Steam Controller, you will want to adjust the configuration of the right pad. By default, it’s set to Mouse Joystick which doesn’t hold the position (so you can’t roll left/right or adjust the throttle). You will likely want it set to Joystick Camera, which for me was perfect. 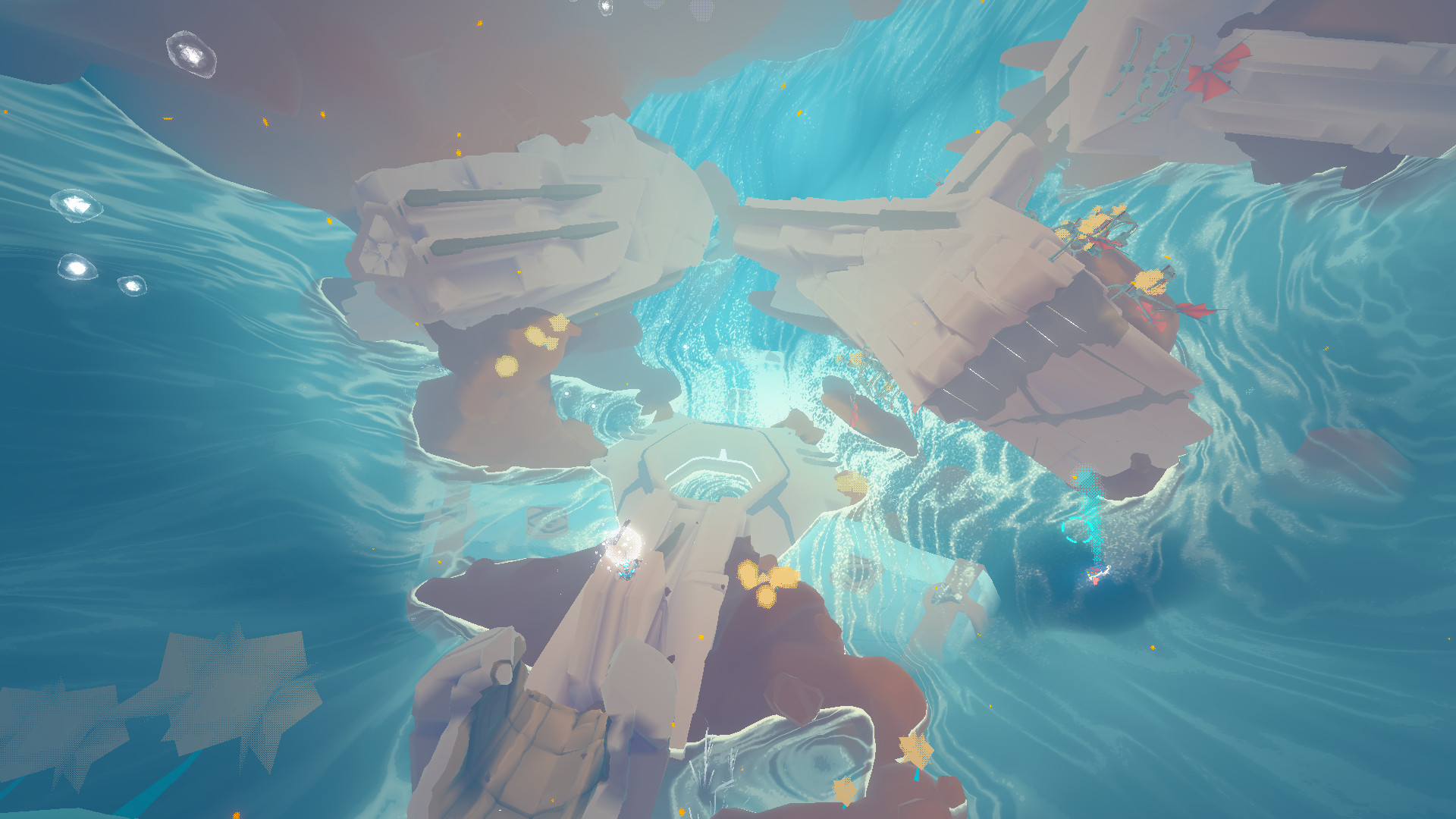 The game is absolutely mesmerising, with such truly beautiful presentation. It’s magical almost, like something out of an animated film except you’re part of the story. For those interested in exploring ancient worlds, where combat isn’t required then this is probably a perfect game for you.

You will be flying and diving into water around various worlds inside the Inverse, collecting Wind and upgrading your drone with relics left over from the Ancients. On top of that, you will come across massive Demigods, each having their own story to tell. Since the Inverse is dying, all of its history will be lost with it. Your task is to travel through these worlds, discover lost relics, find the truths hidden in the myths and eventually find a way out of the Inverse.

InnerSpace doesn’t hold your hand, far from it. It’s a game that requires a little patience, especially until you really get used to flying around these crazy worlds. I was often lost, to the point of just flying around endlessly in search of relics. The exploration and hunting is all down to you, although it will give you some audio cues to listen out for when you’re near a relic. Finding them isn’t always the hardest part, actually finding your way to them (and remembering where they are!) is actually a little difficult. It’s very easy to get turned around and completely lose your sense of where you are, especially if you bump into a few things in a row which for me made the game sometimes a little difficult. 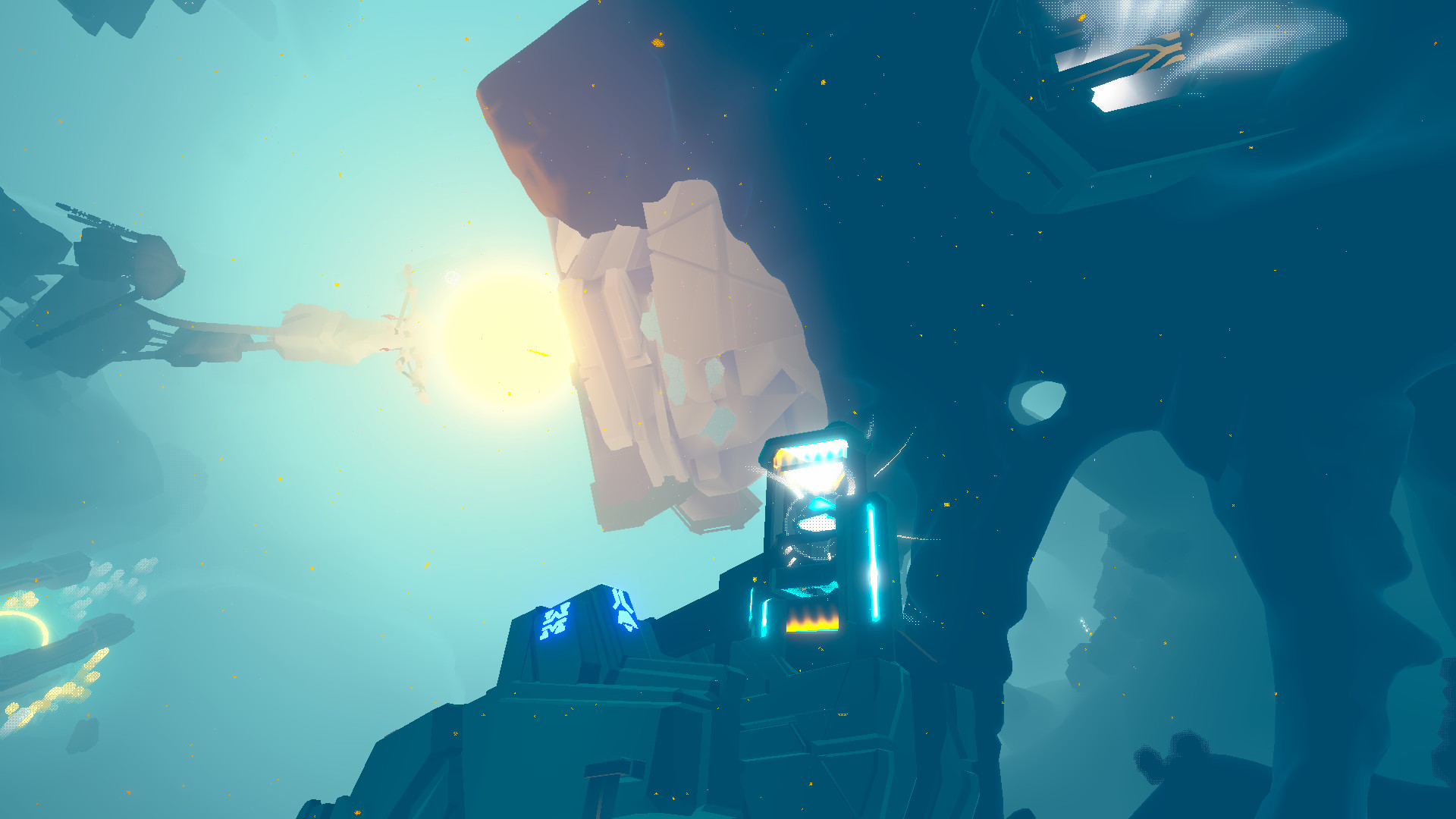 At one point I spent an entire hour flying around confused, until I bumped into something and it was a real hallelujah moment on how stupid I was for not paying enough attention. It wasn't a case of the game not explaining enough, not at all, some parts of it just require a little experimentation and careful attention. In this case, the answer was pretty obvious as it is quite often if you're paying attention.

What I really like, is that you can dock with various points in each world. Giving you a chance to look around without having to worry about bumping into anything, to help you get your bearings. Which brings me to another point, if you do manage to crash a lot, it's all good as there's no health to worry about and you won't blow up. For me, that really helped.

I imagine a fair few people will be put off by how open and hollow it can feel, but I saw that as part of the point. You are travelling around a dying world after all—it's meant to be hollow. You're the one piecing it together, bringing parts of it back to life and it is relaxing.

Overall, it’s a very unique and absorbing experience. The outstandingly beautiful art style, mixed with the sweet tones of the audio make for a very enjoyable exploration game. It’s a game that rewards your patient exploration with some truly breathtaking moments.

You can find InnerSpace on Steam. It’s pleasing to see Aspyr Media continue to publish some interesting Linux games and I look forward to more unique games from PolyKnight Games in future.

It’s also DRM-free on Humble, but 20€ seems expensive for a basic exploration game like this. I don’t think I’ll wishlist it; got too many average games to play already and too little time :(.
2 Likes, Who?

View PC info
So TOTALLY purchased. Installing as I type.
This is what indies are for. Looks absolutely stunning, and the looks of it reminds me of something that could have come from Thatgamecompany, the devs who are behind the fantastic little gems Flow, Flower and Journey on the PS3.

Quoting: ShmerlWasn't it supposed to come out on GOG?

Quoting: BeamboomSo TOTALLY purchased. Installing as I type.
This is what indies are for. Looks absolutely stunning, and the looks of it reminds me of something that could have come from Thatgamecompany, the devs who are behind the fantastic little gems Flow, Flower and Journey on the PS3.

We thought so too. I started chasing these guys at PAX South last year. I literally floated to their tiny booth, staring at the game screen, barely looking down to talk to who would soon be my partners in crime for the next 12 months. Its just that beautiful.

Getting it out on Linux day 1 was a really big deal for us. We are so thankful you dig it!
12 Likes, Who?

Quoting: ShmerlWasn't it supposed to come out on GOG?

GOG turned it down :(

Strange, it doesn't look any worse than Race the Sun which they are selling. Was it because it's not their type of game, or because of other reasons?

Anyway, since Humble are selling it DRM-free, I can buy it there.

Quoting: ShmerlAnyway, since Humble are selling it DRM-free, I can buy it there.

I just bought it on the Humble store (even though they kill me on exchange compared to Steam), but it is not showing up as a DRM-free download. Sigh.
0 Likes

Quoting: ShmerlAnyway, since Humble are selling it DRM-free, I can buy it there.

I just bought it on the Humble store (even though they kill me on exchange compared to Steam), but it is not showing up as a DRM-free download. Sigh.

May be support can help with it? They should not advertise what they don't have.

Quoting: Aspyr_BlairWe thought so too. I started chasing these guys at PAX South last year. I literally floated to their tiny booth, staring at the game screen, barely looking down to talk to who would soon be my partners in crime for the next 12 months. Its just that beautiful.

Thanks for the work! I'll have to take a look at some videos to find out what this game is about, I guess. :-)

Did the developers consider Linux and Mac versions already before you "chased" them?
0 Likes
1/4»
While you're here, please consider supporting GamingOnLinux on: