Interview With Artifex Mundi, Publisher Of Casual Adventure Games, We Have Keys For You

Artifex Mundi has had a strong presence on Steam for Linux since they got through Steam Greenlight last year. Last month they published their 14th game on the digital store, and as usual it was a same-day release for Linux on Steam.

Nightmares from the Deep: Davy Jones is the conclusion to the trilogy which landed the publisher on Steam. Below is the official trailer from its release on Windows and Mac last year. 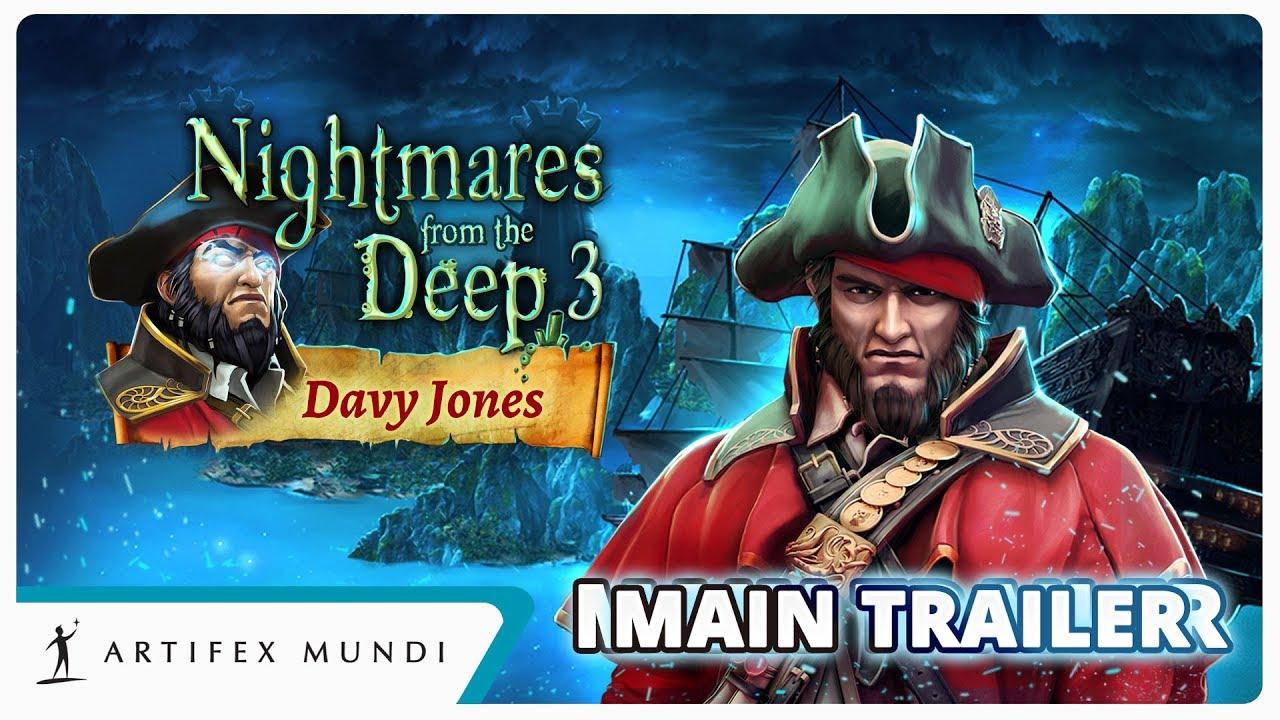 YouTube videos require cookies, you must accept their cookies to view. View cookie preferences.
Accept Cookies & Show   Direct Link
Their games belong to the hidden object puzzle adventure (HOPA) genre, which is a genre that has become more popular over the last few years. So far only a few of the games have received brief mentions on GamingOnLinux, but as a reference site in Linux gaming, we would be remiss not to give this great contributor to our platform a more extensive coverage. Personally I think it's great to see the increase of casual games on Steam, like HOPAs, visual novels, puzzle games and children's games. And I think a good genre mix is important for Linux to continue to gain popularity in the future, both on desktop and on the upcoming Steam Machines.

I got my own first brush with the genre through the Drawn trilogy on Windows, and since I quite liked those I wanted more. While I was looking for games like it I came across the Dream Chronicles series, but apart from those, most were too focused on hidden object scenes for my taste. And none were available for Linux. I had pretty much written off the genre last year when I came across Clockwork Tales: Of Glass and Ink on Steam, thought it looked interesting and decided to give it a chance. I was assured on the Steam forums for the game that it was more focused on puzzles, so I bought it, played it and thoroughly enjoyed it.

The games are similar to traditional point-and-click adventure games in that they are focused on story and have many traditional inventory based puzzles. There's no inventory combine mechanic, but you sometimes have to manipulate items before picking them up. In addition to these puzzles there are also a good amount of puzzle minigames with plenty of variation. As the genre suggests, there are several hidden object scenes in each game. Some are just static backgrounds where you have to find a number of objects by name or shape, but some have a larger degree of interactivity in that you have to manipulate or combine objects to succeed. The stories in most of the games I've played are low fantasy mysteries, and though they aren't especially deep, I've found them entertaining. Art, animation and sound assets are all well produced and contribute positively to the experience.

In an attempt to put both the genre and the developer and publisher of most of these games on Linux properly on the map, I reached out to Artifex Mundi for an interview. They were kind enough to oblige, and here's what PR Director at Artifex Mundi, Szymon Bryła, had to say.

Your self-published games have all had same-day releases for Linux on Steam. What were the deciding factors for you in pursuing Linux as a gaming platform?

The deciding factor was the Linux fan base and that means you, guys! During the Greenlight process on Steam, while trying to get votes for Nightmares from the Deep: The Cursed Heart, we have received many questions about Linux. I have to admit that Linux version was not a part of our publishing plans initially, but then we discovered that our titles are of such a great interest to [your] community and decided to give it a try! Without your support, the road to getting greenlit would be considerably longer. Thank you!

How have your games performed sales wise on Steam for Linux compared to Windows and Mac?

Windows is definitely leading when it comes to numbers. The differences between Linux and Mac are marginal.

Currently Steam is the only option for buying Linux versions of your games. What are your thoughts on offering DRM free versions for Linux; either from your own website or DRM free platforms like GOG, Desura and Humble Store?

We are not huge fans of DRM and we don’t implement this solution into our games. The majority of our games is available on Steam (some of them also on Desura) mainly because (according to our observation) the Linux community is numerous and very active precisely on those platforms. This is why we are focusing so much on Steam these days. Also we don’t rule out the possibility of trying other platforms like GOG in the future.

As someone who grew up with classic point-and-click adventure games and have played several of your games, I find that I liked the ones that have few hidden object scenes and are more oriented towards solving puzzles the most. What kind of feedback have you received from your audience on this mixture and do you feel like it's a balance that you're still figuring out as you release new games?

Our fans have a really huge influence on our titles. We’re always curious about their opinions and ideas. At the same time we’re working hard to make the HOPA genre evolve, by adding original solutions and improvements. While at it, we’re striving to keep a certain balance when implementing new features, hence less hidden object scenes and more puzzles in our latest releases, for example.

Some claim that cinematic adventures, like Quantic Dream's 'Heavy Rain' and Telltale Games' 'The Walking Dead', and hidden object/puzzle adventure games are both natural successors to the classic point-and-click adventure genre. How do you feel about this and why do you think these genres have a wider mainstream appeal?

The classic point-and-click games are the actual predecessors of contemporary HOPA games, which are based on elements taken from classical 90’ adventure games, enriched and modified to cater to present-day needs and expectations of gamers. The market success indicates that this formula is working and everyone’s pleased.

The common factor behind Heavy Rain’s and The Walking Dead’s successes are the characters, their relations and the story progression based on player’s decision making. The visuals – although important – are not critical here. In case of Telltales’ production it was mostly the popular license and the rise in popularity of zombie genre that translated into such a success.

The engine used to create your games, Spark CE, supports a wide range of platforms, including Linux and Android. Yet the editor is only supported on Windows and Mac, according to the documentation on your website. Is a Linux version something that you've considered, given that it would both make it easier to build and test for Linux in-house and also provide a native option for prospective developers who are Linux users? If not, why not?

Correct: our engine is multi-platform in nature. This is why, for example, the Mac and Linux versions are always available together with Windows on Steam. Last year, however, we put licensing Spark on hold. Should we ever resume this, we will definitely let you guys know!


Thanks to Szymon Bryła for answering my questions and to PR Specialist Łukasz Ślipko for facilitating the interview. They also generously provided Steam keys for their latest game that we will give away to three readers.

For a chance to score yourself a Steam key for Nightmares from the Deep: Davy Jones, simply let us know what you like about the HOPA genre in the comments. Submissions will be open until Friday 20th February at midnight UTC, at which point we'll draw three winners who will get a Steam key each. Article taken from GamingOnLinux.com.
Tags: Adventure, Interview, Puzzle, Steam
0 Likes
We do often include affiliate links to earn us some pennies. We are currently affiliated with GOG, Humble Store and Paradox Interactive. See more here.
About the author - flesk

I run the Hidden Linux Gems group on Steam, where we highlight good indie games for Linux that we feel deserve more attention.
See more from me
Some you may have missed, popular articles from the last month:
The comments on this article are closed.
23 comments
Page: «3/3
c704710 20 Mar, 2015

QuoteThe majority of our games is available on Steam (some of them also on Desura) mainly because (according to our observation) the Linux community is numerous and very active precisely on those platforms. This is why we are focusing so much on Steam these days. Also we don’t rule out the possibility of trying other platforms like GOG in the future.

Steam, Desura, GOG. The Linux community is much more than three digital distribution websites. We were here before and will remain after. As far as I can tell, Artifex Mundi believes certain Steam Members (and maybe some Desura and GOG members) are going to buy their Linux games and nobody else is worth noting. We don't matter to them at all, they are only in love with our Steam accounts. They don't just fail to sell Linux games on their site, they fail to mention "Linux" when they proudly display versions for up to 11 other platforms.

As I've said before, every Linux user should have a Steam account and speak up, and if they object to Steam, not buy games
1 Likes, Who?

They might not think Linux is their most important platform, but that hardly translates to hate. Just chill and play a game or something. I'm quite sure that as soon as Linux grabs a bigger share of the market, businesses will be more than happy to flaunt their support. It's not about love and hate to those who are in it to make money, i.e. all of them.
1 Likes, Who?
zerothis 22 Mar, 2015

Perhaps. But I searched their site months ago and found over 30 occurences of "Linux". None of the results were on a page selling games nor on any of the pages where 4 to 11 other platforms/outlets are listed. I sent them an email asking why they seemed to be avoiding mentioning Linux. They claimed they informed people of Linux compatibility by using the Steam icon. This would be a technically valid dodge except for two facts. Not all of their Steam games are for Linux and the show or mention "Windows", "PC", and "MacOSX" in many of the same places where they indicate "Steam". Now I see the mentions of "Linux" dropping. It is clear. They embrace Steam and avoid Linux. They like Linux+Steam users and have a completly different reguard for Linux users.

And it does seem an excellent idea for all Linux users to join Steam to be counted and heard and not buy games. Developers are getting the idea that Steam+Linux users are the Linux community or that others don't matter.
0 Likes
« 1«3/3