Is there anything more amazing than a developer going through all their games to add Linux support? Jackbox Games, Inc. are continuing their effort with Quiplash [Steam] & Fibbage XL [Steam] now in beta for Linux. 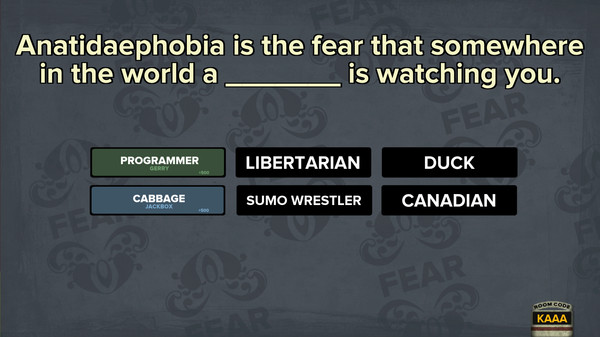 As usual, they haven't announced it anywhere and they sent the news to us directly while allowing us to spread the word. They also sent over copies of each and in my testing they do work great. Quiplash strangely starts in windowed mode for me, but apart from that it was fine.

They're essentially standalone games, which are included in some way in their bigger The Jackbox Party Pack 1-4 bundles. A good way for you to test what their games are like, without forking-out for a full pack.

I've tried all their games they've sent over now (The Jackbox Party Pack 1-4 and now these) and I love the idea of them, some great games for when you have people around. The ability to have anyone with a phone or tablet join in, is such a great idea. I've seen other games try to do this, but none of them have been as smooth as this.

If you do find any issues, you can report them in the Steam forum as the developer will be keeping an eye on it.

View PC info
Nice. I will surely take a look on it. Can be nice option for some parties. Having this in mind, if Ataribox will support installation of games from Steam or have other option for such titles to be installed, then it can be just the kind of titles that suits this HW and its market really well.
0 Likes

View PC info
Oh, I know that one from that one Far Side strip! The answer is "duck". :)

They definitely make some pretty fun games, I've played Drawful and Fibbage at a friend's house and watched people play several other of their games.
0 Likes
While you're here, please consider supporting GamingOnLinux on: