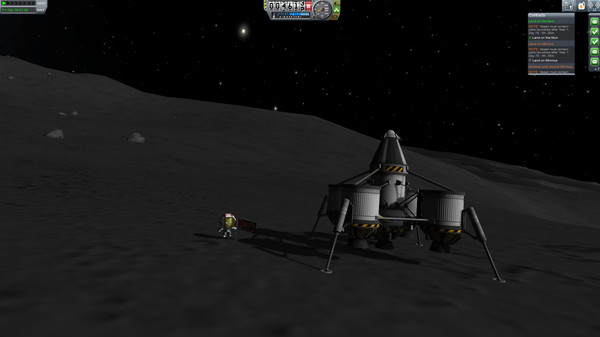 They will be adding in a fully featured Mission Builder with the ability to share your creations with the community.

It will also come with a 'History Pack' which will contain a bunch of brand new missions for you to attempt right away. These will be real historical missions from our own history, which sounds damn interesting. That's the kind of thing that might get me to truly try the game properly.

They will also add in a scoring system, enabling you to see how good you are compared to your friends.

Oh, and your astronauts will also be able to have personal parachutes for those inevitable launch failures.

What makes me really love Squad, is that the expansion will be free to anyone who purchased the game before April 2013. I seem to own the game on Steam, but I've no idea when I acquired a copy of it, so I am unsure if I will be included in that or not. Article taken from GamingOnLinux.com.
Tags: DLC, GOG, Steam, Upcoming | Apps: Kerbal Space Program
8 Likes, Who?
We do often include affiliate links to earn us some pennies. We are currently affiliated with GOG, Humble Store and Paradox Interactive. See more here.
About the author - Liam Dawe

View PC info
What? What's that you say? Time to start playing Kerbal again? No problem!

View PC info
Sounds awesome! They are sooo going to need these parachutes!

KimyrielleSounds awesome! They are sooo going to need these parachutes!

Parachutes? No my Kerbals love to glide in to land at 1,000 mph & go out in a blaze of glory, at least that's what I tell everyone at their funerals. ;)

View PC info
I tried one of their free beta versions a long time ago. even though I really like sandbox games the original KSP didn't seem to have much for goals other than just seeing if you could get a hunk of metal to fly.
I hope they continue to add more expansions like this. It has finally peaked my interest

neowiz73I tried one of their free beta versions a long time ago. even though I really like sandbox games the original KSP didn't seem to have much for goals other than just seeing if you could get a hunk of metal to fly.
I hope they continue to add more expansions like this. It has finally peaked my interest

You wouldn't recognise it now, there's so much more to it these days, you have specific tasks that earn you money so you can pay to research bigger & better parts for your rockets, there are space bases to build & launch, other planets to land on, it's not just seeing if you can get a rocket to fly anymore.
2 Likes, Who?

View PC info
That game is one of my worst game purchases ever. Who makes a multi platform game and makes it to use Windows only fonts. Got to love it when you start up the game and there is not text anywhere.
0 Likes
1/2»