Larian Studios Working On A New Game While Divinity: Original Sin Is Still Not On Linux


@gamingonlinux This is an update posted on our forums http://t.co/xtB9ZYNsll - we will have more information soon and will share it asap.

Update 2: Someone involved with Larian took to reddit anonymously to mention a few things. Linking to our comment here in case it is later removed.

Update 3: The comments on reddit from the Larian employee have been deleted, but they did include such things like:

And (this one is edited to bleep out a naughty word) 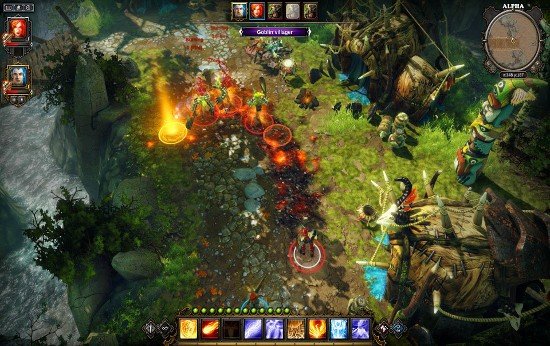 I imagine this is going to upset a lot of people waiting on the promised port of Divinity: Original Sin. Larian Studios are working on a new game.

The saga of waiting for some games on Linux seems like it will never end, and the latest possible casualty might be Divinity: Original Sin.

Back in March of this year, they did detail why it was taking so long to port, and they were supposed to be working on a big new update which needed their focus, but it seems they have also been working on a new game that will be shown off at E3 this year.

We haven’t heard from them since that post on their forum, and with a new game being worked on with a Publisher it’s quite hard to imagine them diverting resources back to giving Divinity that promised Linux version.

It’s a nice reminder to not back things on Kickstarter to save some heartache. I imagine people are getting a little annoyed after nearly a year of waiting.

I am the owner of GamingOnLinux. After discovering Linux back in the days of Mandrake in 2003, I constantly came back to check on the progress of Linux until Ubuntu appeared on the scene and it helped me to really love it. You can reach me easily by emailing GamingOnLinux directly.
See more from me
Some you may have missed, popular articles from the last month:
The comments on this article are closed.
77 comments
Page: «5/8»

QuoteThrowaway for some insight.
We didn't know we would be doing a Mac/Linux port until we read the Kickstarter update ourselves. It was never planned, and by the time we did the Kickstarter, the game was nearing completion.

A lot of the middleware we used didn't work on Mac and Linux, and it was well to late to fix that. Instead of doing the port inhouse, it was sent to a different company in a different country (a lot cheaper). They did a lot of work, but initially, only for Mac. Linux was never a priority, the Steam Box was though. When that was delayed, so was the port. It also didn't help that the Mac port was hardly (or not even) profitable.

When the game was released and turned out to be a big hit, a lot of money was spent on making the game better. LOTS of stuff was added, which basically meant everybody worked on maintaining the existing code, and not working on the Linux version, which was still missing some middleware.

I know there was talk for a while of releasing the Linux branch, which wasn't in sync with Mac/Win. Which basically meant you'd never be able to play it with Windows/Mac friends, as I doubt we'd ever get the go ahead to resync the patches. Based on Swen's forum post, that's no longer the plan (thank fuck).

We're working on another big (really HUGE) update, which breaks compatibility with the 'old' one. We can only release the port when we release the update... Don't ask me when that is, but it will change the game considerably, so hopefully that will create some new excitement for you to play the game.

So yeah, the delays are shit, we don't like it either, but considering any time we spend on the Linux port is a financial loss... it's hard to convince the people in charge to make it a priority.

Reminding the people in charge you guys exist is a good idea though. Keep writing articles and spamming the twitter channel. It helps us to get this done as well.

fraghopper 6 May, 2015
View PC info
I understand that Linux (and Mac, for that matter) users have the burden of proving that we will buy games and make it worth while for devs to port games to our platform. But if you do a kickstarter and you say you'll port something to Linux and people give you money predicated on that fact..... then that's what you do.

This "well, we didn't ever plan to port to linux until late" excuse just does not matter. They agreed to do it. They spent backers' money, so they have a contract to fulfill. I don't really understand, to be honest, how Kickstarter is immune to standard business laws.
3 Likes, Who?

Quoting: fraghopperI understand that Linux (and Mac, for that matter) users have the burden of proving that we will buy games and make it worth while for devs to port games to our platform. But if you do a kickstarter and you say you'll port something to Linux and people give you money predicated on that fact..... then that's what you do.

In particular, I don't get how many here suggest that the promised and still lacking Linux version is something we should be less upset about than other things - because, you know, it's Linux and it's giving developers a hard time and we should be grateful that it's still on their list after all. WTF! :S:
1 Likes, Who?

Quoting: BillNyeTheBlackGuyWithout crowdfunding, we wouldn't have excellent games like Pillars of Eternity or Shadowrun Dragonfall. So no, I'll keep donating to projects I find interesting.

Then you're part of the problem.

You lose your right to bitch when the Linux version fails to materialize. After all, you just "invested" right? You didn't pay for anything.
2 Likes, Who?

View PC info
Updated the article again, and the Larian person has now deleted their comments.

Edit: Added in shots. Not very impressed at this.
0 Likes

Quoting: liamdaweUpdated the article again, and the Larian person has now deleted their comments.

How we know it's employee account? Just curious. If those comments are true, then wow, that's quite a saddening display of attitude from indie developer. I guess if you are successful, you can shit on your backers openly without remorse.

EDIT: But at least there's some indication what happened - they first wrote game only supporting DirectX. Now they have new iteration of engine which will support cross platform. it's not a bad thing, but communication is multiple levels bad bad bad.

EDIT 2: aaaaand all other dev comments got deleted from reddit. Seriously, stop jumping around. Just tell how it is.
0 Likes

I think it's really bad to keep people waiting who funded them.

I am with you that they have kept people waiting for too long but on the Kickstarter page when people pledged it did say:

DIVINITY ORIGINAL SIN will be DRM-free, and will be localized in English, French, German, Polish and Russian. Additional languages may be added. The game will initially be available for PC. If Mac and Linux versions -and other languages- become available they will be free to owners of PC copies (digitally). Digital copies will have to be downloaded via your preferred digital retailer such as Steam or GOG.com if available.

That wording screams afterthought to me from the word go.
0 Likes

salamanderrake 6 May, 2015
View PC info
I think that Linux users should never back anything on kickstarter or any site like that ever again, and I don't think we should ever buy anything from Larian studios even if it is a day one Linux release, we don't need devs like that on Linux anyways, they just make the Linux gaming experience bad for everyone. If they can port to mac but not linux then they are worthless anyways. Don't buy Larian games anymore and don't support them either, that includes telling others to buy their games. We need to start sending devs like them messages that we are not going to take their crap anymore.
0 Likes

View PC info
I think the forum post which was linked to strikes an apologetic tone and they're clearly wanting to support Linux now, which is good. But it's easy for me to say that, because I didn't back this, so I've not had any promises of support broken by a Kickstarter pledge which to this day remains mostly meaningless.

Still looking forward to buying this though and it sounds like they're trying to climb a steep learning curve to deliver a product, so I remain hopeful.
2 Likes, Who?

Quoting: salamanderrakeI think that Linux users should never back anything on kickstarter or any site like that ever again, and I don't think we should ever buy anything from Larian studios even if it is a day one Linux release, we don't need devs like that on Linux anyways, they just make the Linux gaming experience bad for everyone. If they can port to mac but not linux then they are worthless anyways. Don't buy Larian games anymore and don't support them either, that includes telling others to buy their games. We need to start sending devs like them messages that we are not going to take their crap anymore.

That is a horrible attitude to have. Don't stop funding things on kickstarter due to a handful of really late or cancelled linux ports, that type of attitude hurts the image of Linux users as a whole. Keep in mind that the Developers may be really annoyed that they were just punted the promise of a Mac and Linux version they never planned to support. From the reply I saw, it seems that:

1. They started Development well before the Kickstarter and didn't expect to be making anything other than a Windows game.

Point is, lets try to rise above the failed/delayed promises rather than throw hissy fits about VIDEO GAMES which in the grand scheme of life really don't matter that much.
2 Likes, Who?
« 1«5/8»
While you're here, please consider supporting GamingOnLinux on: