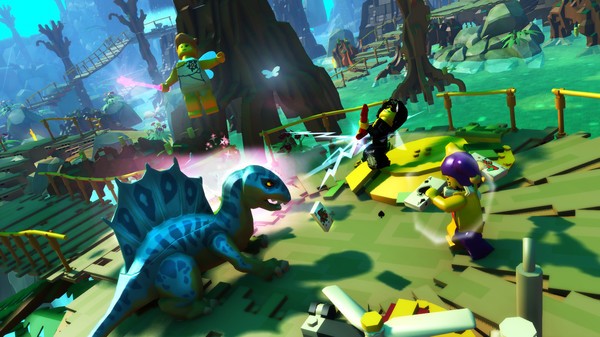 LEGO Minifigures Online originally appeared on SteamDB back in March, but the developers Funcom said to us directly Linux wasn't planned. Their official site, and SteamDB entry now officially mention Linux as a supported platform. Bring on the bricks.

It's really quite something to see a Linux Tux logo on an official website for a LEGO game, but it's happening. The first official LEGO game to come to Linux.

It's going to be $29,99 / €29,99 at release. It was originally free to play, with micro-transactions by the looks of it, but they are switching to a buy once model (hooray). That's still pretty pricey, so hopefully it will be worth it.

I've reached out to my previous Funcom contact, so hopefully we can get a review key. Their official site doesn't really give much information as to what the game is like, so I am very intrigued. Article taken from GamingOnLinux.com.
Tags: Sandbox, Steam, Upcoming
0 Likes
We do often include affiliate links to earn us some pennies. We are currently affiliated with GOG, Humble Store and Paradox Interactive. See more here.
About the author - Liam Dawe

View PC info
I actually cannot believe that LEGO is releasing a Linux game. I considered them to be one of the last to embrace it along with Blizzard/Activision, EA and the like.
0 Likes

View PC info
Is this like a MMO type deal?
0 Likes

View PC info
It's a children's game, not to be mistaken for that totally awesome looking "Lego minecraft" kinda game.

View PC info
This game uses their in-house MMO engine, right, so maybe there's a higher chance we might see their other MMOs on Linux now too? Personally, I'm not all that interested in their games (except for The Longest Journey), but it's always nice to see a new developer targeting Linux.
1 Likes, Who?

fleskThis game uses their in-house MMO engine, right, so maybe there's a higher chance we might see their other MMOs on Linux now too?

Very interesting point. Oh man I'd return to Anarchy Online in a heartbeat if a Linux client were made available.
0 Likes

BeamboomIt's a children's game, not to be mistaken for that totally awesome looking "Lego minecraft" kinda game.

Check out a few reviews. Still cool to have Lego arriving on Linux of course, but... Yeah. I'd rather have a "regular" Lego game to be honest.

Well, the LEGO Minifigures is close to LEGO Universe to me. As I played it last year in Beta already.It seems to get far more content, but still that kind of LEGO Minecraft I would hoping for.

But for this awesome looking "Lego Minecraft" aka LEGO Worlds, may be get a Linux Version too. http://store.steampowered.com/app/332310/

"Will LEGO Worlds be coming to Linux/SteamOS/MacOS?
At the moment, we’re focusing purely on the Windows platform. Once we’re happy with the level of stability/quality in our Windows format, we will explore additional platforms for release."
https://steamcommunity.com/app/332310/discussions/0/615085406675832629/

fleskThis game uses their in-house MMO engine, right, so maybe there's a higher chance we might see their other MMOs on Linux now too?

Very interesting point. Oh man I'd return to Anarchy Online in a heartbeat if a Linux client were made available.

Me too! Have they the new engine for Anarchy Online yet, or is it still delayed? But on the other hand, they deleted my AO-Account without any further notice. AoC & SW would be great too.
0 Likes

View PC info
Someone who bought the game on Steam says that it won't launch. The response is somewhat troubling:

Currently the game is only officially supported through the Linux based Steam OS but may run on other distributions through emulators such as Wine. I hope this information helps!

Should we expect to see more of this? Also, what are they doing to cause it to work on SteamOS but not Ubuntu?
0 Likes