Looking for a Battle Royale game that works on Linux? 2D browser-based surviv.io is one

I know, a bunch of you are probably already running away due to it being browser-based, but I find that really quite interesting. surviv.io is actually not bad at all. Basic of course, since it's a top-down 2D game that runs directly in the browser, but that's also what makes it so interesting. You can play it on basically anything and if you want to team up with someone, it generates a link for you to send them and away you go. You can also play with strangers on a team as well, which also works surprisingly well with the simple emotes system to give them a thumbs up, or a sad face.

It has the features you might expect from a Battle Royale game. You start with nothing, you have to quickly find whatever you need to kill everyone else (or keep your friends alive). You find various weapons, ammo, equipment and all while you have to keep an eye out for other players trying to survive. On top of that, there's also the zone system, so you have to make it inside an ever-shrinking zone to stay in the game.

Getting into a game is also surprisingly easy, click Play and it's 1-2 seconds before you're dumped right into the thick of it.

Admittedly, we don't have a lot to compare it to, since Linux doesn't really have many Battle Royale games, but I've found it to be surprisingly fun. It becomes frantic, we've had a good few laughs with it and you can see for yourself how well the idea actually works in a video we did: 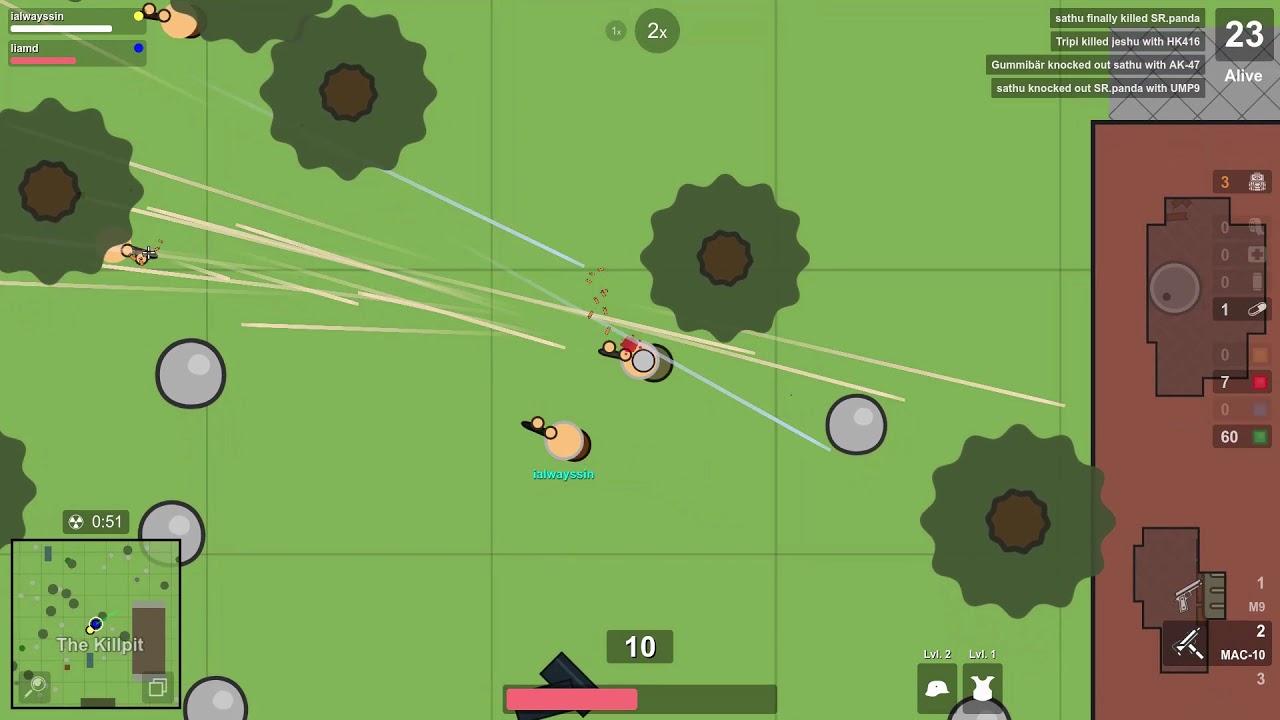 Going by the changelog, it's showing that they're working on smoke grenades, rivers, cities, melee weapons and some form of accounts system too. It's going to be an interesting one to watch evolve.

It's by no means perfect, it can become a little bit sluggish at times and there's the occasional invisible wall, but hey it's free and fun what more do you want? From what I understand from other Battle Royale games, is that they can take a long time until anything happens whereas surviv.io keeps the action close.

Check it out on surviv.io, there's thousands of people playing it and I'm not surprised.

Thanks for the tip, Howardz!

View PC info
For a BR game it has everything besides building (which I'm very ok with.) The gameplay is short and quick which is really great because you can get a ton of matches in without having to worry about real life stuff interfering or vice versa. Gun play is as good as it can get with a variety of weapons that makes them all unique and better in different ways. One thing that I like so far is that the community seems nice enough. I found a random strange at I was basically at his mercy with no ammo but he wanted to teammate. He gave me bandages and ammo and we went on trying to win (but we lost.) I've had more fun with it than Fortnite :'(. I'd recommend it.
0 Likes

View PC info
I just jumped into this and played with a friend for about a half hour. Pretty fun in small spurts. The aiming feels like huge input delay and is hard to deal with. Good for laughs though.
0 Likes

* dies instantaneously *
LOL , thanks for the chuckle Liam :)
2 Likes, Who?

View PC info
Since we're talking browser games, https://airma.sh/ is pretty cool as well (and also has a BR mode). It's a top-down combat aircraft game :)

Sadly that games has a very tiny player-base, whereas surviv has thousands of players.
0 Likes

Sadly that games has a very tiny player-base, whereas surviv has thousands of players.

Oh, I wasn't aware of that. I haven't played it for some time, and last time there were around 5k players :/ I just thought that mentioning it could be interesting to someone...
0 Likes

View PC info
Man. I like it. My kids have been getting on my case about Fortnite but since Windows and Mac are a no go in this house. I had to look around for something. We managed to get 'Rules of Survival' working via Android and WINE1.6. So far that has them sated and a few of their friends have joined but I think this will do wonders.
0 Likes

Quoting: CyrilBut you can't hide yourself in a bush, can you? (Like in PUBG) ^_^

Actually, you can!
2 Likes, Who?
While you're here, please consider supporting GamingOnLinux on: