Looks like a Linux version of Ashes of the Singularity: Escalation with Vulkan is still on the table 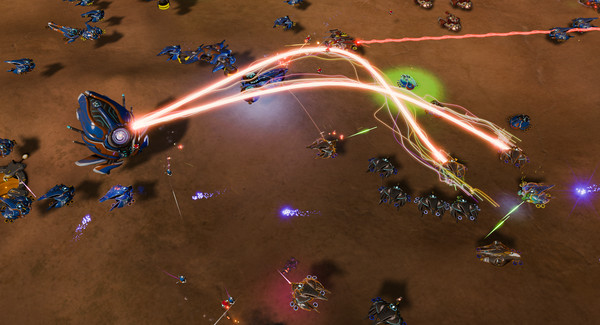 Ashes of the Singularity: Escalation [GOG, Steam] recently gained Vulkan support in the 2.4 update along with tons of other new stuff. The interesting thing is that Linux is mentioned once again.

In this Steam post talking about Vulkan, see this bit:

QuoteThe Vulkan version also paves the way for a future Linux version. Getting Vulkan is a big step in making Ashes of the Singularity available on more platforms.

Considering that was posted only ~2 hours ago, it's a damn good sign that it's being considered.

I'm really looking forward to it, as it's exactly the type of strategy game I love and it would be pretty incredible to have such a title native on Linux.

Considering their roadmap and the fact that Vulkan support in Ashes is still a work in progress, it may be quite some time until they're even ready to publicly say a Linux version is actually coming.

QuotePlay as the Post Human Coalition or their eternal foes the Substrate and battle for control of the galaxy. Experience maps of unprecedented size and detail with the unparalleled power of the world’s first native 64-bit RTS engine, Nitrous.

Enjoy the game online with friends in ranked or unranked multiplayer mode or play it by yourself against a powerful non-cheating AI in skirmish or campaign mode. No matter what mode you play, strategy is the key: deciding what technologies to research, where to send your armies, how to manage your economy, and what units to construct are crucial to victory.

Experience a massive-scale real time strategy game where you wage war across worlds with thousands of units. The conflict has escalated, and it’s time to choose a side.

Article taken from GamingOnLinux.com.
Tags: Steam, Strategy, Vulkan
8 Likes, Who?
We do often include affiliate links to earn us some pennies. We are currently affiliated with GOG, Humble Store and Paradox Interactive. See more here.
About the author - Liam Dawe

View PC info
Nitrous developers actually worked on Vulkan API design itself (they are members of the Vulkan working group). Which is kind of ironic, given how long it took them to add Vulkan support to Ashes of the Singularity. And the game is available on GOG too by the way.

View PC info
Been hoping this would get a Linux version before it was even released. Now that there is a dim of light, I hope it will not be threatened by the lack of Galaxy.
3 Likes, Who?

View PC info
Has anyone tried this via Wine with the Vulkan renderer? does it work decently I wonder...
1 Likes, Who?

Quoting: TheRiddickHas anyone tried this via Wine with the Vulkan renderer? does it work decently I wonder...

I've just tried, you need to install Steam in x64 Virtual Environment (The game won't install in a 32bit Environment) and then switch on the Beta tab to "Opt-in - v2.40 Release"and install it. It starts up fine but currently I'm stuck in the loading screen.

On the Steam forums they write that the first load could take longer, but I doubt it will take longer than 20 minutes. Also tried to kill the game and start it again without any success.

I guess the game starts by default in DX11 mode and I have no idea if or how I can change that to use Vulkan.

*update*
I've just renamed the AshesEscalation_Vulkan.exe to AshesEscalation.exe, which gets started by the launcher, still the game hangs in the loading screen for ever.


It's interesting to see the DirectX12 vs Vulkan benchmark results. At lower resolutions performance is comparable:
View video on youtube.com

But at higher resolutions Nvidia seems to have an issue:
View video on youtube.com

Quoting: N30NThere was a release video:

It's interesting to see the DirectX12 vs Vulkan benchmark results. At lower resolutions performance is comparable:


But at higher resolutions Nvidia seems to have an issue:

View PC info
I've seen a benchmark on youtube of this game where nvidia performs bad with Vulkan but AMD performs the same as DX12.
1 Likes, Who?

Those things will take time and a lot of work to improve. I wouldn't judge the implementation before it's in final state.
2 Likes, Who?

View PC info
I think we might get a client finally when nobody cares about the game anymore. Yay, exactly my type of RTS! Yay, no players playing multiplayer anymore when it does arrive!
0 Likes
1/2»
While you're here, please consider supporting GamingOnLinux on: