Update: Seems this is the Linux port Ryan "Icculus" Gordon was hinting at for a while on his Patreon, as he simply said "yep!" in reply to me asking if this was the one.

Update #2: It's now out! See this post for more info from Ryan and this post for the official announcement. You likely need the "public_beta" branch on Steam.

This is certainly fun news, since Turok is a game I always wanted to play but never got a chance. It seems it's coming to Linux! 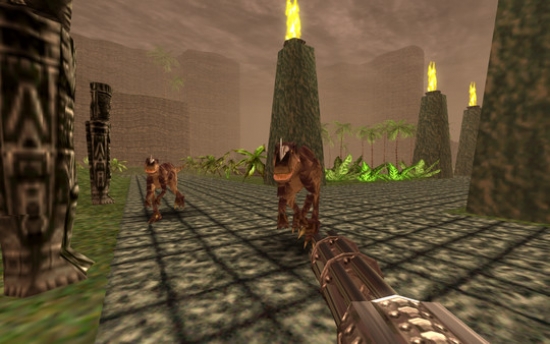 Popping up on SteamDB today was this, showing some reasonably good supporting evidence for a Linux build. It specifically mentions "Turok: Dinosaur Hunter - Linux + Steam OS x64". As we all know, some games pop up on SteamDB and end up not coming, but it's usually a good sign.

This isn't the original version, but an enhanced version from Nightdive Studios.

Turok is back and no dinosaur is safe! When it was first released in 1997, Turok introduced gamers to a world teeming with cunning enemies, traps, puzzles and deadly weapons all within a vast 3D environment ready to explore. Now the classic game has been restored and enhanced with a new visual engine and exciting new features to sink your teeth into!

It's currently on Steam and GOG, so hopefully both will see a Linux build. I've messaged Nightdive to see what's happening.

View PC info
I already bought it on GOG back when I gamed only on Windows but I would be happy to buy a Steam copy if it happens to support the Linux version.
0 Likes

Looks like Gordon might gave a thing for older classic titles, maybe titles that he always wanted to port back then?
2 Likes, Who?

View PC info
Finally! I no longer need to use Wine for my most-played game. :D

No editor/mod loader (and so no workshop support), but standalone mods work. Some of us provide standalone download links on our workshop pages, or you can check turokforums.com or turoksanctum.com.
1 Likes, Who?

Quoting: dubigrasuLooks like Gordon might gave a thing for older classic titles, maybe titles that he always wanted to port back then?

It's not the first time he is working with Nihgtdive too. He helped them with Noctropolis for Linux.

View PC info
Ooh I remember playing the crappy Gameboy Turok 2 version when I was a kid. I want to take a second dive into a proper Turok game. Is there a good way to automate notifications when Linxu port releases on GOG?

Quoting: GustyGhostIs there a good way to automate notifications when Linxu port releases on GOG?

You can write your own notification script, by periodically reading this.

View PC info
Nice, I liked Turok: Evolution on Xbox back in the day. But I am a bit lost with the timeline... Or the series. I would like to play Evolution again, but did it see a PC release as well?

It is always strange to realize that the games I played when I was younger actually had a "story".