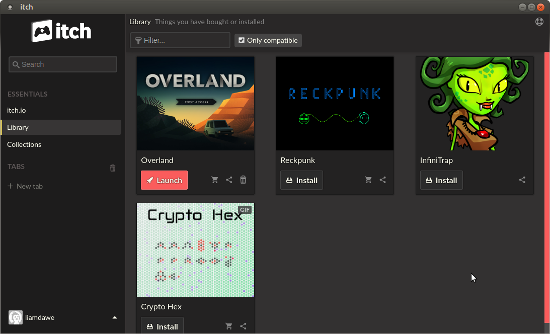 The latest and greatest itch app for the itch.io games store is now available, it's a pretty huge release.

New features
- Sandboxing, better security against games doing naughty things
- App manifests, for developers to pick what executable the game launches
- The start of an API integration
- Download manager improvements, including pause, resume and download priority
- Local library search and filtering
- Browser improvements
- A much better Collection view
- Automatic issue report, if a game crashes you can click a button to send a report
- Press & review copies, making it easier for people like me to pick and install games that are in the press system
- Better Linux support

It's pretty incredible how far along the itch app has come, I would say it's already closing in on how interesting the GOG Galaxy client is and they still don't have a Linux client.

I think we all need to pay a bit more attention to itch.io. Article taken from GamingOnLinux.com.
Tags: Itch.io, Open Source
0 Likes
We do often include affiliate links to earn us some pennies. We are currently affiliated with GOG and Humble Store. See more here.
About the author - Liam Dawe

I am the owner of GamingOnLinux. After discovering Linux back in the days of Mandrake in 2003, I constantly came back to check on the progress of Linux until Ubuntu appeared on the scene and it helped me to really love it. You can reach me easily by emailing GamingOnLinux directly.
See more from me
Some you may have missed, popular articles from the last month:
The comments on this article are closed.
12 comments
Page: 1/2»
rustybroomhandle 1 Jul, 2016

Looking good. Making it my mission to buy at least one thing off itch a month to support creators who make the kind of stuff you likely won't find elsewhere.
2 Likes, Who?

View PC info
I bought two games there recently (Infinytrap and Sky Rogue). I'll try their client for a test. Does it allow selecting where to install games, or they all go to standard locations?

Plenty of nice improvements indeed, some of them already put the itch app above the Steam client. Now if they could do refunds like Steam…

Edit: I tried the app and it’s running relatively well on Gentoo. I like the dark grey theme of the app and the itch.io home page, but as soon as you click on a link it shows very white web pages that hurt my eyes. Also when going back to the home page, the pictures are gone. Also I tried to set an install location for the games but it didn’t work.

View PC info
Itch.io has been excellent and they don't restrict who can put what games on their platform, which immediately makes them a cut above the rest. As an indie game developer (with no delusions of grandeur - it's just a hobby), I rather prefer Itch.io's entire offering the best. They give a rather equal platform to everyone.

GOG's entire history of Linux "support" has been lackluster, to say the least. I'll be surprised if we see Galaxy in any kind of usable state within the next year, year and a half.
0 Likes

View PC info
I really wish that either Steam client would go open source or that Itch would gain access to higher profile games.
0 Likes

View PC info
Debian packages are out of date.
0 Likes

Quoting: mr-eggitch.io is a great web platform , not tried the client as it won't work for me idk why. The only slight concern is that it turns into another Desura in 5 years from now.

Well, they already have much more support from developers than Desura ever had. A big problem Desura had was that they also ran indiedb, moddb and so on, Desura never got the attention it needed.

Quoting: liamdaweWell, they already have much more support from developers than Desura ever had. A big problem Desura had was that they also ran indiedb, moddb and so on, Desura never got the attention it needed.

And publishing a game on Desura was much more complicated than on itch.io.
0 Likes

Quoting: AnxiousInfusionI really wish that either Steam client would go open source or that Itch would gain access to higher profile games.

Higher chances are with GOG publishing Galaxy spec, and then community making a FOSS client.
0 Likes
1/2»
While you're here, please consider supporting GamingOnLinux on: