Make Sail [Steam, Official Site] is a game about building boats and adventuring across different islands, it's now in Early Access and here's some initial thoughts. 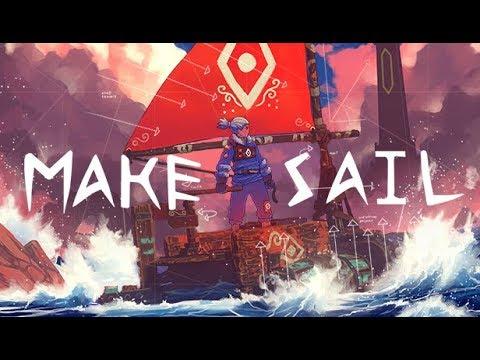 I will not give it a full review right now, since it would be quite unfair since it's early on in development. However, here's some early thoughts.

I've actually had access for a little while, but I wasn't able to get a lot of testing done previously due to input issues and poor performance (some of you may have seen it on a recent livestream from me). The developer quickly acted on my feedback, so the released build is a massive improvement. Performance has vastly improved, although there's plenty of room for more optimizations and input is a lot better.

One issue I do have with it right now, is the wonky camera movement. Sometimes the camera rotation seems locked to an extremely small area while you're walking, which I've given the developer some feedback on.

The camera controls while building your boat also feel really unnatural. It's right mouse to rotate, but then middle mouse to shift the camera position. I'm very much used to right mouse button to pan it around, with WASD for camera movement, it just feels extremely weird with their current setup. I might be in a minority there, but it's how other games tend to do it and it does feel better that way.

Most of my time has been spent battling with the wind, attempting to reach the other islands. I'm not having a huge amount of success, but it's fun to fail. I've been pushed backwards, capsized many times, run aground with pieces falling off and so on.

I love the gif feature, so you can see just how much of a failure I am: 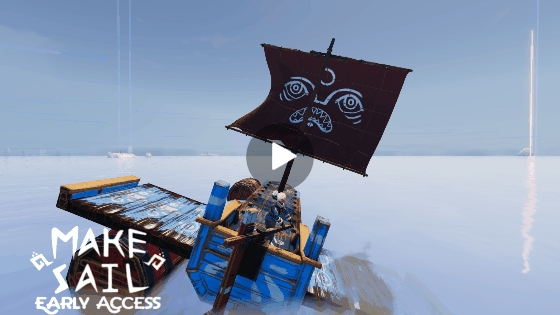 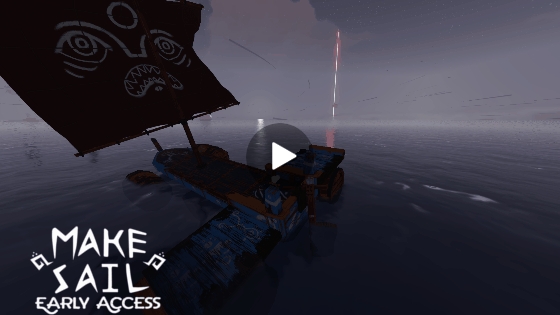 What's nice to know, is that some of the development is actually done on Linux. The developer is not just a fan of Linux, they told me they're actually a long-time Linux user.

You can find Make Sail on Steam. It's a little rough, but it's extremely promising. Great style and presentation, a real joy for those who like exploration. I'm looking forward to seeing how they intend to expand on what they have!

View PC info
Its actually quite fun indeed, its like a besiege with the exploration.
Too bad it doesnt have Coop though, i feel that this would add more into the game.
Overall its not too hard at least not at the beginning, you just have to make rounds around the middle island to follow the winds and collect new items. If you want to travel with sidewind you have to lower the sail quite a bit to not let the wind push you over. A bit collecting stuff and you get a turnable triangle shaped sail which will make the handling totally different and specially if you pair this sail with the regular non-turnable.

I haven't reached to the propellers and stuff yet, so there seems to be a lot to discover.
Its in a pretty good shape for an early access game.

I also didnt feel like WASD movement in build mode was missing, but it would be nice option to have i guess.

View video on youtube.com
5 Likes, Who?

Ketil 2 Apr, 2018
View PC info
I have no issue with building or sailing any more. Square sail for going with the wind and triangular sail to sail at an angle. Just unlocked propeller, but I haven't figured out how to reliably get enough energy from jellyfish and other sources yet.I expect it will let me go directly against the wind when I figure it out. It is more challenging until you get the triangular sail though. I recommend pickup up all ship parts on all islands you visit or pass by and don't sail too far out in the storm.
0 Likes

Erzfeind 3 Apr, 2018
View PC info
Bought it day one, but currently fails on both Linux and Windows for me. Developers respond fast on Discord, though, hope they can fix it ;)
0 Likes

View PC info
Looking forward to seeing how this one turns out! (that is, once its out of early access) :D
0 Likes
Purple Library Guy 3 Apr, 2018
So is tacking possible?
. . . I want to make the boat from Waterworld. Really dumb movie, but such a cool boat.
View video on youtube.com

View PC info
wish they make the game based on real facts, like if you drink 2 cups of saltwater and 1 of fresh water you can survive.


You can sail against the wind when you get a triangular sail if you make a good boat for it, but I think it is a lot harder than in real life with a good sailboat. The default boat layouts aren't too great so it is important to experiment a little and build them yourself. You will pickup new parts on the islands so it will be easier to build a good boat later on. When I am tacking and sail at an angle against the wind and want to turn I tend to turn too far. How much depends on the boat, but if I want to turn 90 degrees then I tend to turn 135-150 instead. If I have enough room then this isn't too bad, but it is not acceptable when there are too many obstacles close by.

It is far easier to not tack at all. If it fits then I either use quadratic sail and follow the wind, or use triangular sail and sail almost directly toward the middle or toward the outer part of the uncovered area. I also have jets so I can use that as an alternative to tacking to go against the wind. I always combine this with a triangular sail so I can still navigate when I run out of energy. The energy is refilled at each proper island so I can land frequently to refill it more often. I also get energy from jellyfish when I pass them.
1 Likes, Who?
While you're here, please consider supporting GamingOnLinux on: