Tesla vs Lovecraft is another top-down shooter from 10tons Ltd that puts you in the shoes of Nikola Tesla as you face off against lovecraftian nightmares. 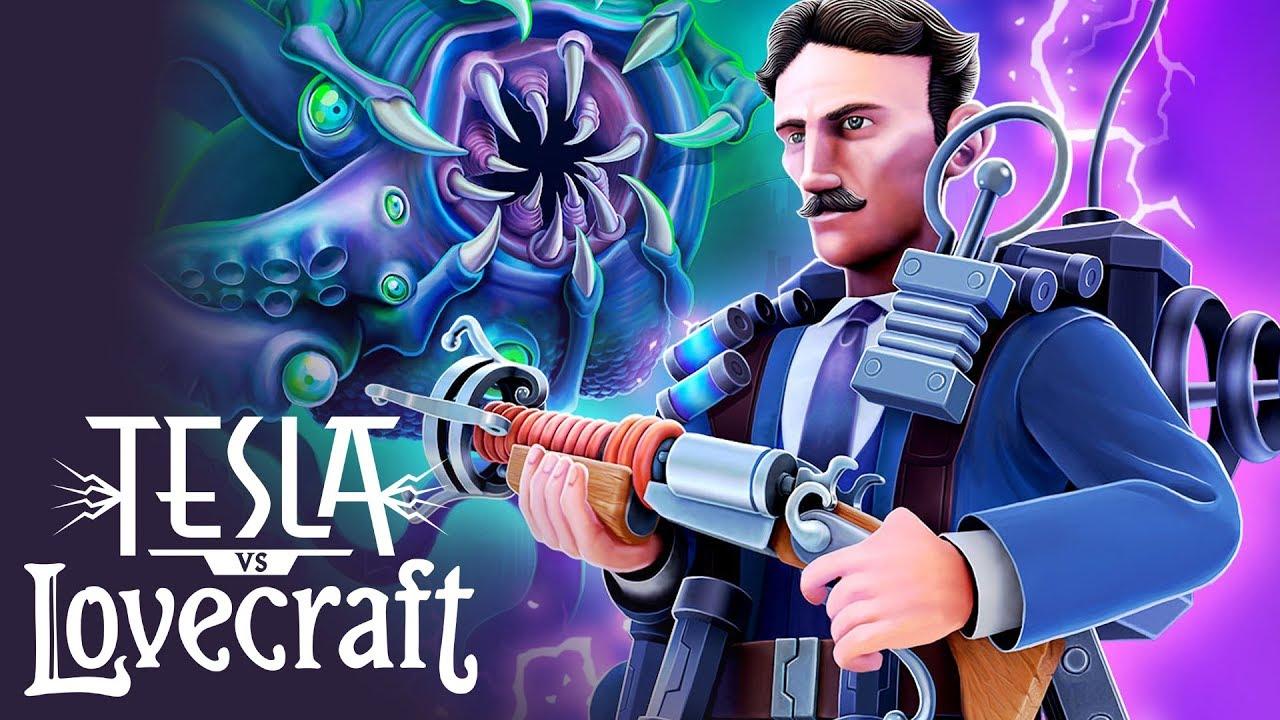 In terms of gameplay, it feels a lot like an evolution of Crimsonland compared to their other recent shooters. As you face off against hordes of monsters, you level up in each mission and gain access to various perks. The problem is, the levels are quite short and fast-paced to the point that you're levelling up constantly and the perks just end up becoming noise that you stop paying attention to. All of them give you a bonus and half the time it doesn't really matter what you pick. Although, you do gain access to more weapons and perks as you progress through the game, but they're all random in each mission.

Once you get the mech, things certainly become a little bit more interesting. The mech is powerful with two huge guns, but it's a little on the slow side. You also only get it for a limited time and once it's gone, you have to zip around to collect the parts for it as they spawn in, to activate it again. An interesting mechanic for sure, since you're not then relying on the mech constantly. It also adds a little bit of a challenge to it.

I have to admit, I have enjoyed it for the most part. There's something insanely satisfying about collecting all the parts to spawn in your insanely powerful mech, to then hit a slow-time power-up and then run over a nuke. Some seriously over the top effects when you pick up a nuke—such glorious destruction. I also quite like that various levels have walls, fences and so on you can warp behind using your "Quantum Teleportation" backpack for a quick breather from the hordes of enemies. They won't last long though, as the monsters will crush through them quite quickly. You can use walls and fences to break up enemies too, if you're smart with your own movement, although it's very easy to back yourself into a corner.

If you're playing with the Steam Controller, do note that the initial config for the right pad is terrible for aiming. It starts with Mouse Joystick and it flips about all over the place. Switching to Joystick Move for the Right Joystick was much smoother. You might also want to make an action set to switch to Mouse movement for the right pad for when you're on the map to pick a mission. As you use the right pad to move around the map, but that's only really an issue if you wish to move to a previous mission, as the next one is selected by default.

The Linux version as a whole was flawless, it performed perfectly well and I haven't actually encountered any bugs. If you like fast-paced and completely over the top shooters that go on and on then this is definitely for you. Due to how satisfying it is to utterly annihilate these monstrous creatures with various weapons (and a huge mech), it can get a little addictive.

You can find Tesla vs Lovecraft on Humble Store and Steam.

View PC info
this has been on my wishlist for what seems like ages now, i'll have to pick it up soon
0 Likes

View PC info
@liamdawe I noticed similar issues with the default Steam Controller touch-pad settings for some games. Maybe GamingOnLinux can step-in and provide fixed versions when you guys notices such during your review process. Would be a nice added value. :-)
1 Likes, Who?

Quoting: micha@liamdawe I noticed similar issues with the default Steam Controller touch-pad settings for some games. Maybe GamingOnLinux can step-in and provide fixed versions when you guys notices such during your review process. Would be a nice added value. :-)

Yeah, that is an added value that might justify upping a Patreon contribution..
0 Likes

View PC info
Is it just me , or are we milking Lovecraft and Tesla a tad too much lately ?
1 Likes, Who?

Quoting: razing32Is it just me , or are we milking Lovecraft and Tesla a tad too much lately ?

Quoting: micha@liamdawe I noticed similar issues with the default Steam Controller touch-pad settings for some games. Maybe GamingOnLinux can step-in and provide fixed versions when you guys notices such during your review process. Would be a nice added value. :-)

Yeah, that is an added value that might justify upping a Patreon contribution..

Quoting: razing32Is it just me , or are we milking Lovecraft and Tesla a tad too much lately ?

Eeewwww!
1 Likes, Who?
While you're here, please consider supporting GamingOnLinux on: