Marvel Heroes 2015, A MMO Action RPG Looks Like It Is Coming To Linux 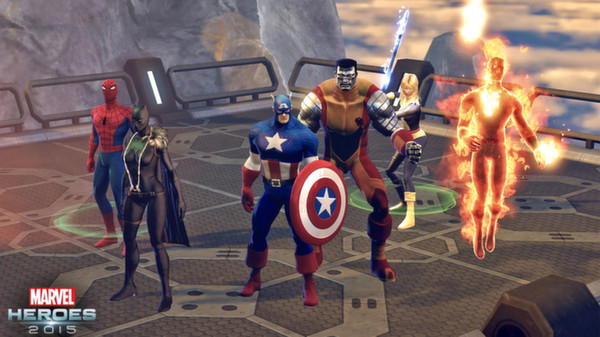 My spidey sense is tingling. Marvel Heroes 2015 a free to play MMO Action RPG looks like it will be coming to Linux thanks to info taken from the excellent SteamDB.

We have reached out to the developer for proper confirmation, but this is exciting as Marvel is a big and popular franchise and something I am also personally interested in.

About Marvel Heroes
Marvel Heroes 2015 is the Marvel MMO ARPG that you have been waiting for! Play as Iron Man, Thor, Wolverine, Hulk, Spider-Man, Captain America and many more as they team up to try and stop Doctor Doom from devastating the world with the power of the Cosmic Cube. Marvel Heroes 2015 features a deep leveling system unique to each Super Hero, diverse locations set across the expansive Marvel Universe, a robust crafting system, action-packed player-versus-player (PvP) and much more.

Marvel Heroes is a free-to-play Massively Multiplayer Action RPG for PC created by David Brevik, the visionary behind Diablo and Diablo 2 with an extensive original story crafted by Marvel super-scribe Brian Michael Bendis.

UPDATE: It seems it's not a sure thing right now, but I will be kept in the loop by the developers. Hope for the best on this one folks. Article taken from GamingOnLinux.com.
Tags: Action, MMO, RPG, Steam, Upcoming
0 Likes
Share

Imants 9 Jul, 2014
View PC info
My friend recommended it to me. But I decline because it was only on windows. Now maybe I will check it out if it comes out on Linux
0 Likes

minj 9 Jul, 2014
while the idea is interesting, I'm worried about the execution. How many Spider-Men does it take to make being one of them not fun any more? I'm worried there aren't that many heroes for everyone to have. Or maybe it's just me being ignorant?
1 Likes, Who?

After LotRO, AoC and so many other WoW killer MMOs, I'm sceptical of everything now. At least these guys have the realism to go F2P right out of the gate.
Honestly I think with this game, cloning the DC Universe Online model would be best, making you create your own hero and running into the big shots, but it might have its allure to play as Iron Man too...as long as there are a few hundred heroes to choose from.

EDIT: Checked the game and its comments out on Steam, I'm not that psyched any more. Damn it.
1 Likes, Who?

View PC info
When it first was launched a few years back it was essentially *slayed* by the reviewers. So I would not be too excited if I were you guys.

Here's hoping some of the more decent Marvel games comes our way too.
1 Likes, Who?

Quoting: BeamboomWhen it first was launched a few years back it was essentially *slayed* by the reviewers. So I would not be too excited if I were you guys.

Here's hoping some of the more decent Marvel games comes our way too.

After LotRO, AoC and so many other WoW killer MMOs, I'm sceptical of everything now. At least these guys have the realism to go F2P right out of the gate.


It's not a normal MMO, it's a hack and slash game with MMO elements. You don't create your own hero either.

Anyway, I played Marvel Heroes online before, and I hated it. I doubt Marvel Heroes 2015 is any better. I rather have Torchlight 2 or Path of Exile instead. TL2 developers don't' seem to be interested in Linux at all, so I really hope GGG can bring Path of Exile to Linux.
0 Likes
octoowl42 9 Jul, 2014
Wooo! I can play as Squirrel Girl!!
0 Likes

Quoting: BillNyeTheBlackGuyIt's not a normal MMO, it's a hack and slash game with MMO elements. You don't create your own hero either.

The game's steam page reads "[b]uild your character using a library of spectacular powers appropriate to your hero", so I believe you're not talking about the 2015 edition (hey, Liam, how about we get a clearer post title and body BTW? I for one don't understand if the "2015" is just a suffix to state that Marvel Heroes is going through an overhaul or if this is a whole new game).

As for the hack-and-slash, I have never played this game, but if it stays true to the touted "action-RPG-style", it must depend at least a little on strategy behind the fights.
0 Likes

View PC info
Marvel Heroes 2015 is just a patched up/relaunched version of the original Marvel Heroes where the devs tried to fix some of the glaring errors and mistakes. True, they have fixed some of the things they were criticized for but the core game is still the same.

You still can't create your own heroes from the ground up, you just build the skill set of the hero you choose in traditional rpg fashion - a skill set who more often than not is a copy-paste of another hero's set of skills just with different labels on them. And by the way, that's something that reminds me of how skills were in Marvel Ultimate Alliance 3, another a huge disappointment after the first two Ultimate Alliance games (who were pretty darn good).

If there is ONE topic that turns my heat up, it's the state of Marvel labelled games. Man, what a sad chapter that is. It looks like they believe the only ones that care about Marvel any more are kids and build their games with them as target audience - when in fact kids today barely know what Marvel *is* (or, was).

I wish I could blame Disney, but this started before they entered the arena. But Lord knows it's not become better after that.
1 Likes, Who?

View PC info
Still want Blizzard to realase there linux client. I'v tryed so meny other mmos and nothing compairs to Wow, in my opinion : /. I could always try this one, but I doubt it will kill my desire for wow.

And by the looks of the comments above me, its dosnt look to bright. But hey, we got witcher 2 :)
0 Likes
1/2»
While you're here, please consider supporting GamingOnLinux on: