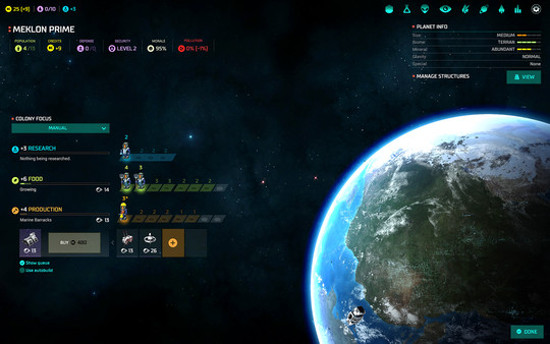 Master of Orion [Steam], the revamp, not the original, has been updated again and it finally includes fixes for troubles a bunch of Linux players had been having.

The game wouldn't launch on some Linux system and even when it did, some people didn't even get a main menu to actually play it. The developers were responsive posting possible fixes on the Steam forum and when it was confirmed to fix it, they pushed it out in a recent patch.

It might be time to go take another look if you had problems with it. Article taken from GamingOnLinux.com.
Tags: Steam, Strategy
0 Likes
Share

View PC info
Unfortunately this is one of the many games that are missing their Linux versions at GOG :( And it sounds like they have no plans to bring it to GOG either, as the dev says that the Linux version is Steam exclusive: https://www.gog.com/forum/master_of_orion_conquer_the_stars/known_issues_list_as_of_91616/post4

Quoting: adamhmUnfortunately this is one of the many games that are missing their Linux versions at GOG :( And it sounds like they have no plans to bring it to GOG either, as the dev says that the Linux version is Steam exclusive: https://www.gog.com/forum/master_of_orion_conquer_the_stars/known_issues_list_as_of_91616/post4

Exclusive to Steam? Interesting. So someone make a decision to bind the game only to Steam. Wondering if there was any incentive bihind ( ;

Not good its not on GOG, but would be really interesting if Valve would somehow support devs for binding Linux version to their platform. It would mean they are starting to focusing more...
0 Likes

View PC info
I`m happy to pay for DRM Free Games an I use only GOG. I dont need that shit like Steam. If they are worried about piracy no worries most of Steam games are cracked. Even steam achievements can be hacked it so easy just use GooGle.