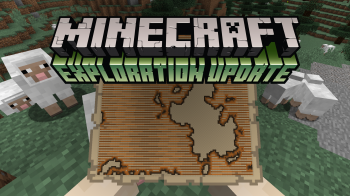 The Minecraft [Official Site] developers have announced The Exploration Update and they have already released a development release for it.

They have finally gone back to adding in some worthwhile content to make worlds more interesting to explore.

They have added in "Illagers", who are the villager’s outcast cousins and they will reside at the Woodland Mansion. They aren't very welcoming apparently, so bring your sword.

There's more to it, so read their blog post here. That doesn't cover all of it of course, as they want you to discover some for yourselves. Article taken from GamingOnLinux.com.
Tags: Sandbox
0 Likes
Share

View PC info
It will be interesting to see how they plan to improve exploring, which is arguably one of the most interesting aspects of Minecraft.

Would be great to see some castles with rogue knights to take over in the wild :)
0 Likes

mattsturgeon 29 Sep, 2016
View PC info
My favourite bit about minecraft is the technical contraptions, resource farms and redstone. Personally I'm most excited about the Shulker Box, which will make inventory management and storage significantly easier and more convenient.
0 Likes

View PC info
Anyone know if they prepare new launcher for Linux? Or still not yet/ not trying even?
0 Likes

View PC info
What does Linux People think of Voxellands & Mine test?
0 Likes

View PC info
I must admit I've mostly stopped following new developments since I'm still on 1.7 (that's where the majority of the modpacks are still), but I like the look of llamas. Fleshing out exploration sounds cool too. ^_^ I wonder if they'll spit, like real llamas…
0 Likes

mattsturgeon 30 Sep, 2016
View PC info
They do spit, at wolf's and anything that attacks them
0 Likes

Quoting: ElectricPrismWhat does Linux People think of Voxellands & Mine test?

I play Minetest a fair bit (I'm playing it now!) and I love it. Loads of mods, a pretty solid game engine that's under active development, free and open source, and not a bit of the community's efforts go to profit a company that's hostile to Linux. What's not to like?

As to VoxelLands, I tried a couple of times and could never get it to run, so I gave up on it in the end.

Quoting: ElectricPrismWhat does Linux People think of Voxellands & Mine test?

I like Minetest a lot better tbh, mainly because of how the movement feels there and the possibility to go up/down to +/-31000. Also I think I can't live without sneak ladders anymore ^^


Last edited by coeseta on 1 October 2016 at 8:36 am UTC
0 Likes
While you're here, please consider supporting GamingOnLinux on: