Mini-review of physics puzzler Unmechanical: Extended, released for Linux on GOG and Steam

Unmechanical has been extended with a new chapter, adding more than an hour's worth of puzzles and exploration, and the Unreal Engine 3 powered game is now officially available for Linux. You can buy the Linux version from GOG or Steam, but it does not yet have a SteamOS icon on Valve's distribution platform. 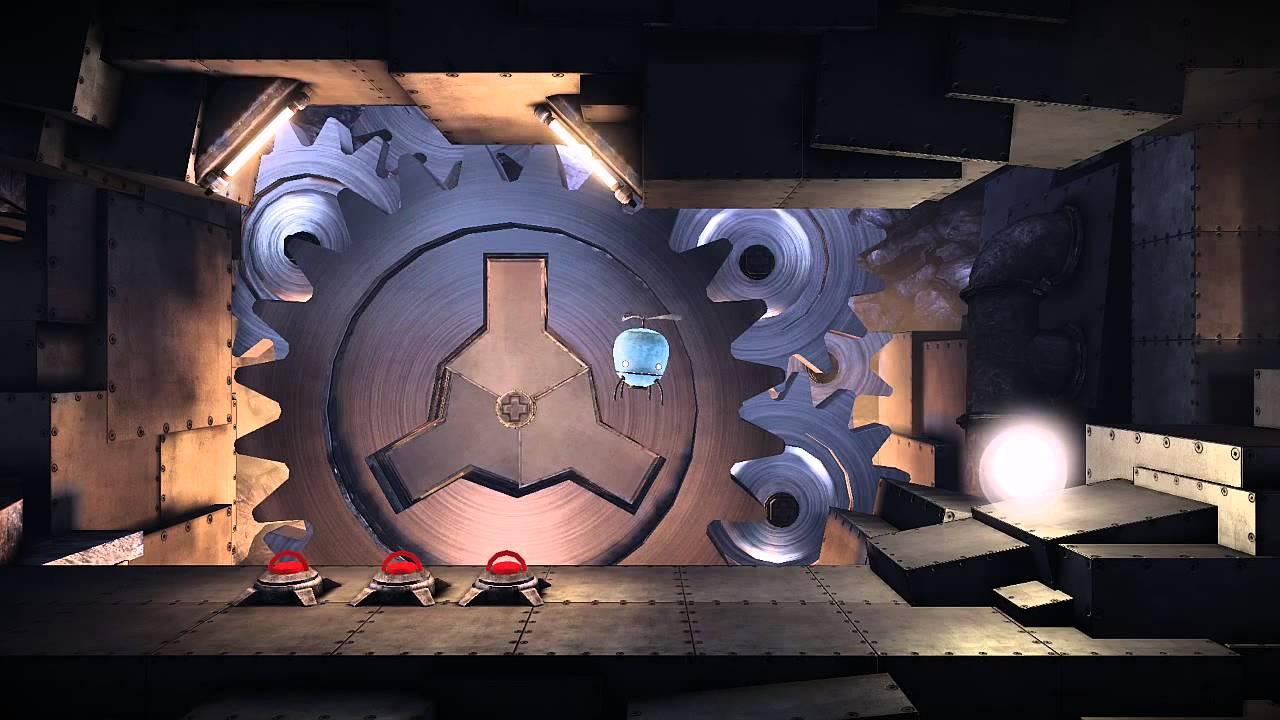 YouTube videos require cookies, you must accept their cookies to view. View cookie preferences.
Accept Cookies & Show   Direct Link
It's been half a year since we wrote about Unmechanical releasing for Linux in an open beta on Steam, so it's been a long time coming. For me it's been well worth the wait though, since I love this game to bits, and being able to play it natively on Linux is something I never thought would happen until earlier this year. If you took part in the beta on Steam, remember to opt out of it to get access to the new content.

The protagonist of Unmechanical is an adorable little flying robot, who is passing through an idyllic green landscape when he is suddenly grabbed by a metallic claw and dragged underground to a dim world of stone and steel. To escape, he must travel through a massive and worn down complex and overcome several challenges to make it out to the surface. In the extension, your robot friend is once again captured by the mysterious forces at play underground. This time with a companion, who is presumably a love interest.

Unmechanical offers a good variety of puzzles, from the pure physics-based ones to puzzles oriented more around memory and pattern recognition. You interact with the world either by pushing against objects or by pulling and lifting with the robot's inbuilt tractor beam. There's a limit to how much weight the robot can carry, and you have to use gravity to your advantage to solve certain puzzles. In the extension, there's a part where the robot gets severely damaged and is barely able to lift off the ground. This temporary crippling of the protagonist makes just getting around a challenge, and I thought it was a good way to introduce new and interesting puzzle mechanics to the game. 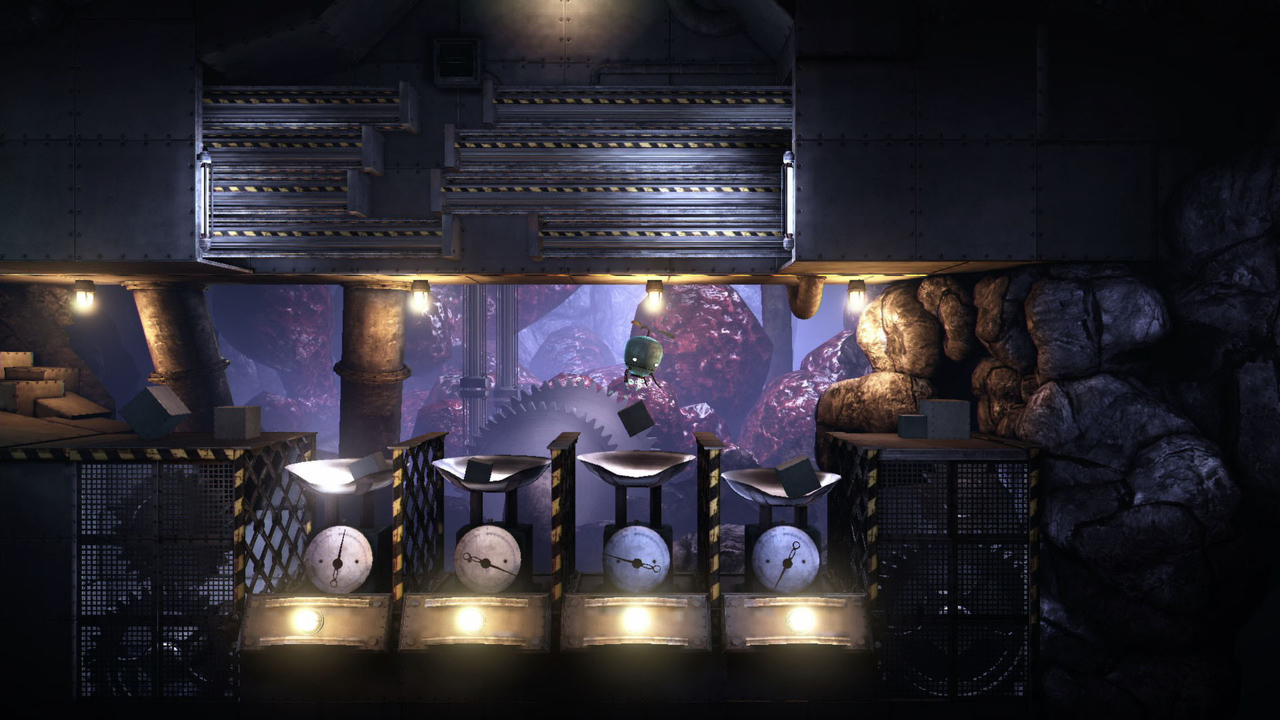 Since the game only has partial controller support, you have to use a mouse to navigate menus. And though this isn't a big issue, it stands out a bit in a game that is otherwise controlled with just an action button and arrow keys or a stick. Another thing is that I haven't figured out how to play the game fullscreen. There's no option that I can find in the menu, and Alt+Enter does nothing. I can't remember this being an issue during the beta. At the moment, the biggest issue is that one action you can perform at the end of the extension makes the game lock up. The issue has been reported on the Steam forums, but until it's fixed, you can only complete the game by choosing the other possible ending.

For the most part, the puzzles aren't overly complicated and the game feels well paced. Some of the solutions might not be obvious though, and if you're completely stuck on a puzzle, it might be a good idea to explore your surroundings to make sure you're not missing something. A full play-through of the original took me about three to four hours, and with an hour or more on top of that, you can probably expect something in the vicinity of five hours for the complete game.

If the game sounds intriguing, you can buy it from GOG or Steam. Article taken from GamingOnLinux.com.
Tags: Adventure, GOG, Puzzle, Review, Steam
0 Likes
We do often include affiliate links to earn us some pennies. We are currently affiliated with GOG, Humble Store and Paradox Interactive. See more information here.
About the author - flesk

I run the Hidden Linux Gems group on Steam, where we highlight good indie games for Linux that we feel deserve more attention.
See more from me
The comments on this article are closed.
6 comments

View PC info
No SteamOS/Linux icon, but it's 60% off for the next couple of days. Looks great though, slightly reminiscent of Insanely Twisted Shadow Planet, which I loved.

scaineNo SteamOS/Linux icon, but it's 60% off for the next couple of days. Looks great though, slightly reminiscent of Insanely Twisted Shadow Planet, which I loved.

Thanks. I forgot to mention that it's 60% off both on GOG and Steam.
0 Likes

View PC info
The game is cute, or rather its main protagonist is. Unfortunately I have some issues with the version from GOG.com like flickering graphics and, most annoyingly, crackling sound. It's a shame, given that the music is so important for this game. Otherwise the game seems to be fun.
0 Likes
JudasIscariot 26 November 2015 at 7:34 pm UTC

PlintslchoThe game is cute, or rather its main protagonist is. Unfortunately I have some issues with the version from GOG.com like flickering graphics and, most annoyingly, crackling sound. It's a shame, given that the music is so important for this game. Otherwise the game seems to be fun.

Are you using the official or open source graphics drivers for your card?

I am not sure myself as to what sound driver the game uses (Pulse Audio or OpenAL) but if it is OpenAL, can you update your version of it?
0 Likes

View PC info
Well, the game is good, no doubt, but it have issues:

- I am experiencing stuttering, in a high end system (R9 290) that can keep 60fps most of the time, using opensource driver;
- I can see a switch to fullscreen, but the game only play at 1080p. If you choose another resolution in the game menu or via config file, it resets to 1080p, very annoying; In my low end system (a A8 APU) it can barely maintain 30fps. So the developers need to fix the configs inside the game ASAP;
- Only directly recognize the Xbox 360 controller, the XBone only works if you physically plug it in Steam Big Picture mode, before starting the game.
0 Likes

JudasIscariotAre you using the official or open source graphics drivers for your card?

I am not sure myself as to what sound driver the game uses (Pulse Audio or OpenAL) but if it is OpenAL, can you update your version of it?

Hey JudasIscariot, thanks. I'm using the nVidia blob. The flickering graphics aren't a big deal to me as it only happens occasionally. Most of the time the graphics seem to be fine, though.

The crackling sound is what I find most annoying. I don't use PulseAudio. The OpenAL version installed on my Arch system is up-to-date. In fact, it's a more up-to-date version than the one that's coming with the GOG.com version of the game.

I'll try a few things and maybe the game will get an update as well. I'd love to see the problem solved as the game really seems to be quite nice.