The new week-long Humble Indie Bundle contains a good mix of previously bundled Linux games. If you missed out on these modern indie classics in the past, this is a good chance to stock up your game library while supporting the developers and charity. This bundle supports Watsi, which funds life-saving medical care around the world, and the Child's Play Charity, which aims to bring some joy into the lives of children in hospitals. 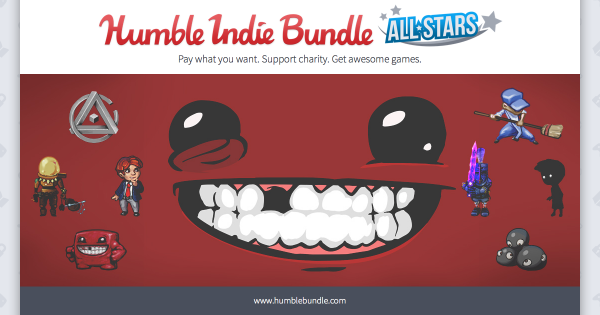 In the pay-what-you-want tier, you'll find construction puzzler World of Goo, along with the indie-hard platformers Super Meat Boy and Dustforce DX. If you pay above the average you get the collection of tower defence classics Dungeon Defenders and the genre defining puzzle platformers Braid and LIMBO. A dollar more will also give you the roguelike action platformer Risk of Rain and the surreal first-person puzzler Antichamber.

Paying a fair amount for these great games supports developers in creating more good games for us, and this is also a good chance to donate some money to two great charities. For some extra motivation in loosening the purse strings, note that the average Mac donation is above the Linux average. And we can't have any of that, can we?

The bundle launched on Tuesday, and will end in less than five days. Article taken from GamingOnLinux.com.
Tags: Game Bundle, Humble Store, Steam
0 Likes
We do often include affiliate links to earn us some pennies. We are currently affiliated with GOG, Humble Store and Paradox Interactive. See more here.
About the author - flesk

View PC info
I own 3 of the 8 games, but I could not resist buying. Braid is superb!!!
0 Likes

Eike 12 Jun, 2015
View PC info
The only problem this bundle might have is that many people will already have several of these games.
World of Goo, Limbo and Antichamber are very, very good games - Antichamber "absorbed" me when I played it.
I wonder if I should buy it for the well acclaimed Braid, but the graphics do not appeal to me.

But, Linuxers, we cannot let the Macies get away with paying more than us!
1 Likes, Who?

Quoting: EikeI wonder if I should buy it for the well acclaimed Braid, but the graphics do not appeal to me.

That's what I thought until I played it. The game is ingenuously artistic in every other aspect. I had zero expectations for Braid, thinking it was a fad I never got into. Now I think it's a masterpiece. "Don't judge a book based on its cover" never felt so applicable for what is Braid, especially now for its age.
1 Likes, Who?

View PC info
Sadly i already have all of the games of this bundle :-( But the bundle is awesome i recommend it for anyone ! A lot of awesome games , Limbo , Braid , Super Meat Boy , Antichamber .
2 Likes, Who?

Limbo and World of Goo are pretty good (especially Limbo) but I can’t recommend the other ones.

View PC info
Yeah, I'll also pass. Already have all of them :O
My (so far) favourites from that sample are World of Goo and Braid. Antichamber in principle (I'm a puzzler), but it didn't convince me on first try. Will look again later, but there's too many not-yet-installed games waiting in my download folder (Risk of Rain and Dungeon Defenders being two of them... :D so no rating for those)
0 Likes
burzmali 12 Jun, 2015
Risk of Rain was still weak on Linux last I played. The game really needs to be play was a gamepad and controller support under Linux is bit of a crapshoot for that title.
0 Likes
contrast 12 Jun, 2015
Like a lot of others, I already have every game in this bundle... Yet I'm still considering buying it to gift the games to my Windows-using friends (maybe nonchalantly mentioning, "Hey, those awesome games I gave you? They all run just fine on Linux. ;) "). And both of the charities are something I can get behind... And beating Mac users' average? Totally not at all a motivating factor. Nope, not at all. *whistles*
2 Likes, Who?
While you're here, please consider supporting GamingOnLinux on: