Come in, have a cup of tea to replenish that mind and let me tell you about Monsters and Monocles a stylish new co-op shooter that’s now available for Linux.

After a little woops by the PR team handling the keys to Monsters and Monocles, I finally have a key to try it out and tell you what I think. 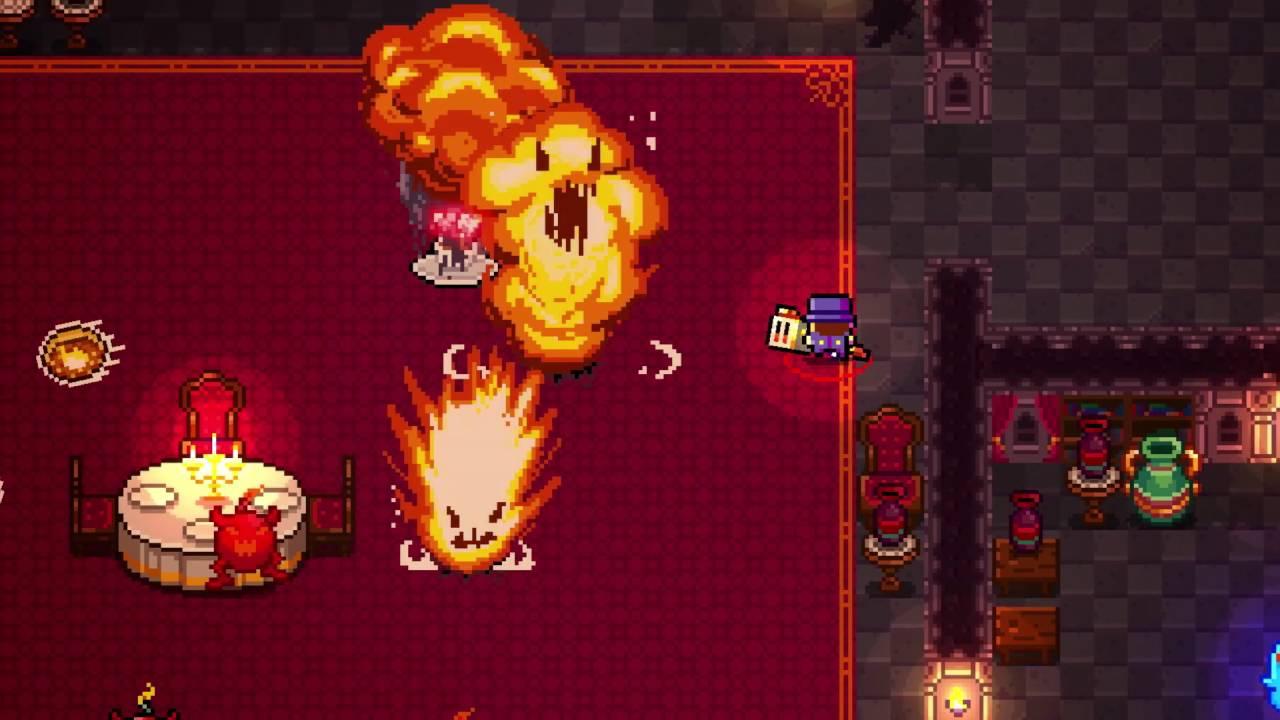 It feels very similar to Enter the Gungeon both in style and gameplay. Although it actually feels faster paced due to the movement and enemy types. I’m actually enjoying this one a fair bit more.

The graphics are really lush, with their vibrant colours and sweet retro inspired design. It’s an extremely stylish game, so Retro Dreamer (the developer) has done well here.

The weapons feel like they have a bit of oomph to them too, the scattergun being the first extra weapon that I found was awesome. It has a meaty sound to it, each shot pushes you back a bit and it will overheat in the middle of battle making the game feel rather frantic. The grenade launcher is especially over the top, with a massive explosion and it’s simply awesome. There’s something incredibly fun about running into a room of walking bombs and firing my grenade launcher in a circle around me.

The character designs are fantastic too. Big ol’ slimes that fire out smaller slimes at you, walking eyes that shoot some sort of sticky web to slow you down, once killed they will spawn a bunch of baby walking eyes. It has a real freaky design to it and it’s awesome.

It’s also quite charming and funny, as picking up a cup of tea gave me a health boost. As a “brit”, that amused me more than it probably should have.

Issues
First thing for people with multiple monitors: It starts on the wrong screen, but you can move it over after setting it to windowed mode and then putting it back into fullscreen.

One thing that has bugged me a little bit, is the enemy AI needs some better pathfinding. I’ve seen them repeatedly get stuck on object, especially the bigger enemies. I feel that will need addressing soon.

Using the in-game ESC menu, I seem to be unable to access the Controls button. Clicking it gives feedback show it’s pressed, but nothing happens.

It also displays gamepad prompts even when I am not using one, I assume this is because it picks up my Steam Controller dongle as a controller even without it turned on.

It seems the developer is already on it for these issues too:

@gamingonlinux Thanks for checking it out! Happily most of the issues are known, working on them as fast as one coder can. :)

Overall it is one I can easily recommend checking out even at this early stage. After a long day walking a four year old around a park, playing football and generally running around, killing some well designed beasts is exactly what I needed.

It has all the makings to easily become one of the best top down shooters available for Linux. I shall be keeping a keen eye on this one for certain.

Also, here’s some Day 1 sales stats for you:

Sad to see Linux so low, but this is in-line with expectations given our current market-share on Steam which is pretty accurate really.

Final note: I have a key ready to do some co-op testing with, so thoughts on that part will come later.

You can find Monsters and Monocles on Steam right now.

View PC info
Despite these kind of games becoming the norm these days, I think I'll give this one a look, Dev seems friendly so that's a plus in my book.

Liam if you get to test the co-op, can you tell me if it offers an LAN/DirectIP option? Thanks :-)
1 Likes, Who?
tkonicz 19 Aug, 2016
I bought it already and its a blast.
Far better then enter the gungeon. I found enter the gungeon quite selfcontradictory: a game about guns that gives you only on rare occasions new guns to play with, while being stuck with a lousy standard gun for most of the time. Monstares an Monocles gives you lots of powerful guns form the beginning, nice graphics, gentle difficulty curve, good design. Looking forward to play it with my son.
1 Likes, Who?

View PC info
I hadn't heard about this one yet. It's going on the wishlist!

{And out of curiosity, and because, honestly, I'm not certain, are those sales-by-OS percentages pretty close to their respective OS market share? I mean, we're not out-buying WinMac, but we appear to be buying our share, right? Is that good? I want that to be good. :) )
0 Likes

View PC info
I'm always very surprised to see very low stats. we've been using linux home for over 10 years (including my wife and 2 sons) and I can tell you my kids barely know anything else than Linux. The only problem is that I have to use Wine for one good third of the games. I can't prevent my kids from wanting a game. Unfortunately, I think using wine counts as windows when it comes to steam's stats...
0 Likes
While you're here, please consider supporting GamingOnLinux on: