For those like me who love their space combat sims, Allspace seems like it may be one to watch for when it enters Early Access in June.

Developed by ShilohGames, the same team behind Disputed Space which is another space combat sim although that one only supports Windows.

It seems there will be no single-player in this one, with Allspace instead focusing on large online battles with support for up to 100 pilots battling it out. 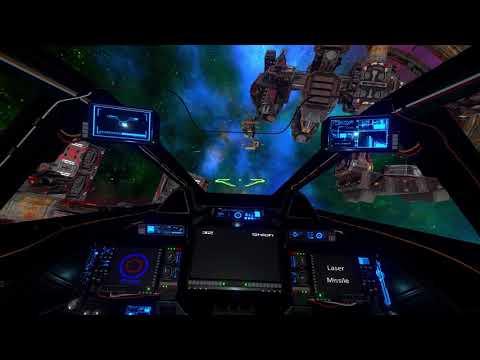 At the June Early Access release it will support a standard deathmatch mode, however they do say that during development they will look to add in other game modes.

There's not too many details out on it right now, so we're following it along to see what happens with it.

- I only see one kind of cockpit
- Cockpits seem just old-style, Wing Commander-esque 1D graphics, no virtual cockpit (addendum: rewatched video, there is indeed some movement to the cockpits)
- No 3rd person view as yet visible
- MP only format has proven challenging for titles in the past (hope there are bots)

Space sims have faced lots of MP challenges as far back as X-Wing vs Tie Fighter. Think about having players in a big, empty space where the main differentiator is turning speed and forward speed. It becomes a jousting match and how fast you can turn on your opponent. This is especially true of titles that utilize a WWII fighter style flight model in space (which it appears this does). I personally think a 6 degree of motion (think Descent in space) flight model is terrific for MP action (see Angels Fall First). Balance between the strengths and weaknesses of different ships and thoughtful measure and countermeasure make all the difference.

Also, space is empty with nowhere to hide. Eve: Valkyrie did MP with a real emphasis on space environments (stations, gates, etc) that you could weave between, hide in, etc... Angels Fall First does this too, plus many objectives, so it's not just fighting but other things you have to do.

I closed beta tested a game on Windows in around 2000 (before the concept of early access was a thing) that apparently never made it to market where you had two teams of players at two space stations. One stayed in the station commanding and giving orders, there were two players per side in bombers, and about 4 per side in fighters defending the bombers with the goal of taking out each other's stations. Was a blast. No MP space sim has been more fun or matched that...

I'll watch this title closely, though. Hoping for the best.

View PC info
This just dropped! Shows a lot of promise, especially as a F2P. Dev has a very realistic sounding 1 year roadmap to full release in the early access. Go try it out and thank them for Linux support!
0 Likes

Quoting: Linuxpunkcontrols remind me of House of the Dying Sun

Dev mentioned in the Steam forums that the game is partly influenced by House of the Dying Sun, so you're spot on there. :)
1 Likes, Who?
While you're here, please consider supporting GamingOnLinux on: