Natural Selection 2 [Steam] is now available in glorious 64bit, but that's not all. This is a pretty huge patch, so let's take a look. 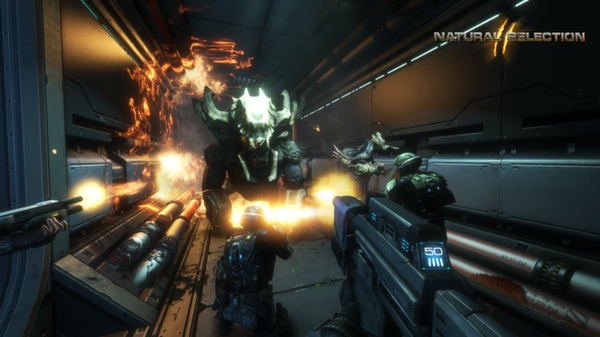 First of all, 64bit support is here and it's live. 32bit will still work for now, but they will remove it so it's time to upgrade if you wish to continue playing.

Sounds like they've done a lot of modernizing in their custom game engine, which is really pleasing to see.

However, as of right now the Linux version is completely broken. You can easily enough get it going again though, as the developer is aware and they're working on it. They show the commands to run in the "Known Issues" part of the changelog, but even though they get the game to start up for me, there's no mouse cursor and no input being registered rendering it still broken for me.

Hopefully the Linux issues will be solved within a day or two as it does sound like a rather nice update.

View PC info
Intel TBB has been a source of freezes on map load during the "Downloading mods" stage, I reported it with a backtrace from GDB. Now that it's gone the game must become much more stable. The main menu is broken so you can't do much. Even connecting via Steam servers doesn't work because it can't find some NS2+ mod files while they're in place. Probably it's also caused by the main menu script being interrupted prematurely.

Too bad, the 64-bit Linux build wasn't available in the beta period, it only appeared today so this kind of breakage is expected.

View PC info
Do you need to be part of the x64bit beta, or is it merged in the main branch?
0 Likes

View PC info
It's released for everyone, no need to apply for beta. Also, they said the fix is also released so the menu should work alright.
0 Likes

View PC info
So like usual, since its in beta linux support is not listed on steam but will work if i download and play?
0 Likes

Quoting: groundhog_day86So like usual, since its in beta linux support is not listed on steam but will work if i download and play?

64bit is beta, not the Linux version.
0 Likes
ngel 7 Oct, 2017
They already released a linux client only update. I played a couple of rounds and didn't see any memory allocation issues any more.
0 Likes

View PC info
Are the next playoffs coming up? They used to organise some national tournaments, didn't they. I watched some on youtube, seemed quite nice how the teams worked together.
0 Likes


Reinstalled this game and had to do the above, that was mentioned in the changelog. In addition I also had to install sndio from aur to get it working. Also before these steps you need to opt in the beta


Last edited by jesta on 7 October 2017 at 8:55 pm UTC
0 Likes
While you're here, please consider supporting GamingOnLinux on: